Edward Wallace aka Timothy Donovan was a transported felon, arriving in Hobart from Dublin on board the Blenheim (2), on February 2nd, 1849. He became an habitual offender. His photograph is held at the Mitchell Library Sydney, SLNSW, in a box of nine cartes-de-visite of prisoners taken by Thomas J. Nevin at the Hobart Gaol. The collection was bequeathed by David Scott Mitchell to the State Library of NSW ca 1907 (PXB 274). The Mitchell Library has catalogued all these nine photographs with the date "1878"; however, two of the photographs were taken by Nevin in 1875 (those of Mullins and Smith), and this one, of Edward Wallace was more likely to have been taken by Nevin in 1872 or early 1873, when Wallace was re-arrested for absconding from the Hobart Gaol. 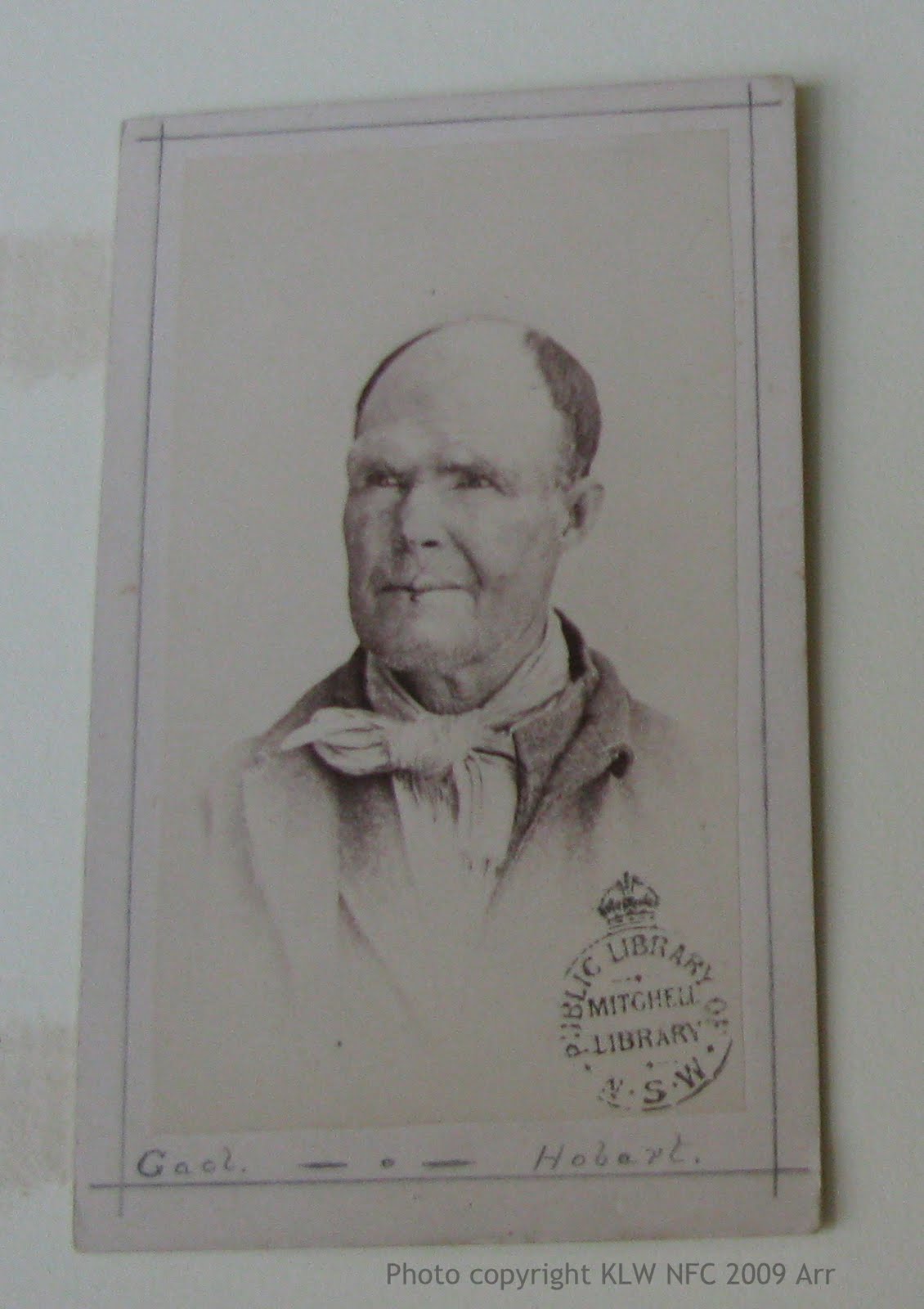 Carte-de-visite of prisoner Edward Wallace
Taken by Thomas J. Nevin at the Hobart Gaol between 1873 and 1878
Held at the Mitchell Library, SLNSW (PXB 274)
All photos © KLW NFC 2009

1849: Convict transportation records at the Archives Office of Tasmania and police records show that Edward Wallace was transported with the alias Timothy Donovan, leaving Dublin on 1st November, 1848, arriving Hobart on 2nd February 1849: 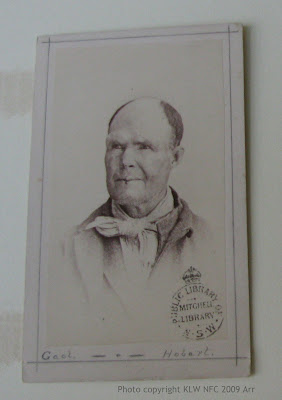 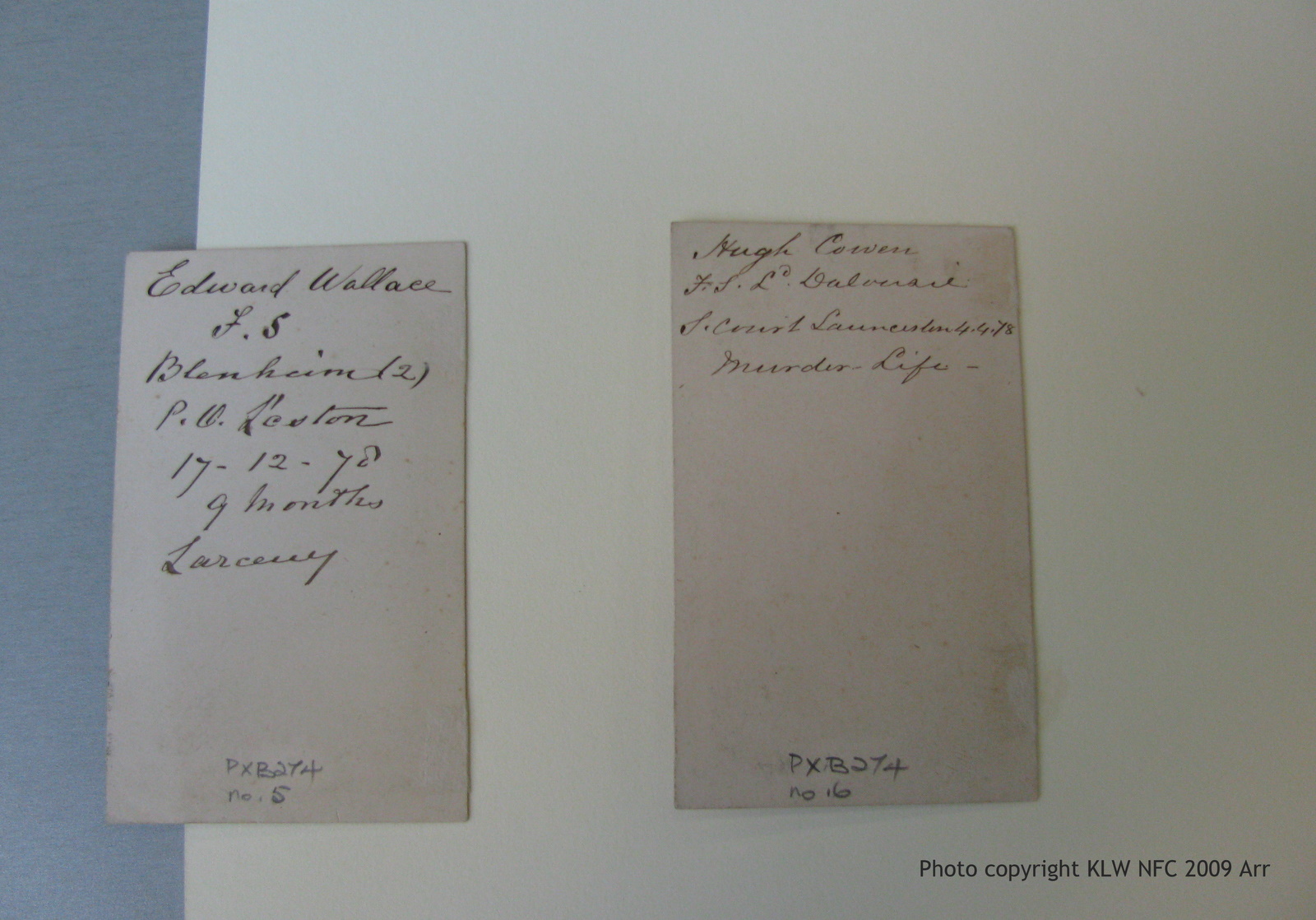 The verso of the photograph of Edward Wallace (on left) is transcribed with these details:

Although this transcription on verso might suggest that this photograph of Wallace was taken on that date, 17 December 1878 and at that place, the Police Office Launceston, this was not the case. His sentence on that date was 9 months. Sentences of three months and longer warranted the transfer of the prisoner from regional and rural lockups including the Launceston Police Office to the main prison, the Hobart Gaol in Campbell Street where he was bathed, shaved and issued with a prison uniform before being photographed. Below this photograph on the front of the carte-de-visite is the handwritten transcription - "Gaol -Hobart" - which indicates that this identification mugshot (and its duplicates) was used for official Hobart gaol documents and the Police Office Register Book as well as being pasted to the prisoner's criminal record sheet and to any warrants issued subsequently for arrest.

1868: Edward Wallace alias Timothy Donovan was convicted and sentenced to three years for housebreaking and robbery in the Recorder's Court Launceston on the 6th February 1868, and transferred by Page's coach to the Hobart Gaol. He was not long at the Hobart Gaol when he absconded, and was sentenced to a further 18 months on 26th September 1868. By early 1871 he had been transferred to the prison at Port Arthur, 60kms south of Hobart to serve the remainder of his sentence.


1871-1872: Edward Wallace was discharged from Port Arthur between the 14-18 September 1872, having served his sentence of three years delivered in February 1868 plus another 18 months for absconding from Hobart on 26 September 1868. While at Port Arthur he was additionally sentenced as follows:Idleness at Port Arthur 25 January 1871, 7 days
Fighting at Port Arthur, 17 October 1871, 1 month 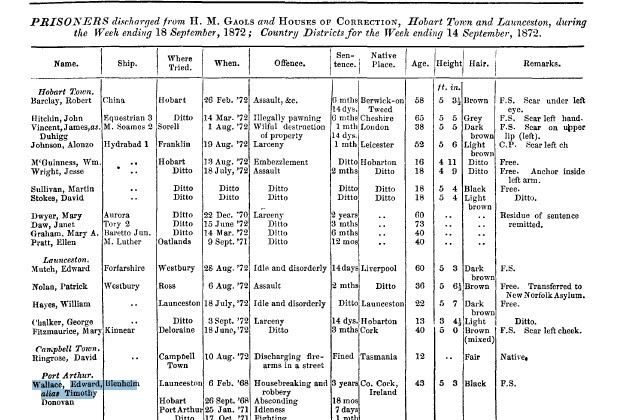 1873: Less than six months after his discharge, Edward Wallace was listed again as convicted on 29th March 1873 for larceny with another 3 months' sentence, this time at Westbury. He would have served this sentence too at the Hobart Gaol. 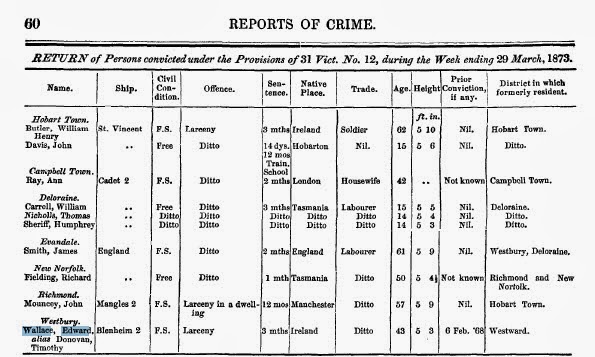 There is little doubt that police and prison officials would have wanted to enforce the new regulations requiring photographs of second offenders when Wallace was discharged in September 1872. That this photograph of prisoner Edward Wallace in prison issue clothing exhibits the same emblematic features of Nevin's early 1870s' commercial studio portraiture technique - especially the relaxed pose and ghosting of the backdrop sheet - would indicate that it was taken between 1872 and 1873, rather than the later date of 1878. These same poses and backgrounding techniques are evident in Nevin's extant portraits of his solicitor since 1868, Attorney-General Giblin (AOT), and his newly wedded wife Elizabeth Rachel Day (Nevin Family Collection, 1871). Several duplicates would have existed, and Nevin's original glass negative would have been used to reprint the photograph of Wallace we now have, placed on this carte inside a blue crossed frame. It may have been reprinted several times up to 1878 at the Hobart Gaol by Thomas Nevin's brother, Constable John (W.J. or Jack) Nevin, on Wallace's last recorded conviction in December 1878 and eventual discharge in September 1879. But as both of these later dates pertain to Launceston, and the photograph itself carries the wording "Goal -Hobart", the photograph as a glass negative must have already existed by March 1873.

1877: Edward Wallace was convicted and sentenced to 6 months for larceny on 10th March 1877, this time at Deloraine.

1878: One year later, Edward Wallace was arrested and convicted again of larceny, this time at Launceston, on 21st December 1878. This is the offence which was transcribed on the verso of the extant photograph now held at the Mitchell Library Sydney. The handwriting appears archaic, but it may not have been transcribed on that date. It may be the work of the collector David Scott Mitchell or even later archivists rather than the handwriting of the police when the photograph was in official circulation.

The sentence of another 9 months when Edward Wallace convicted again for larceny, notice published on 21st December 1878.

1879: Edward Wallace was discharged from the Launceston Police Office on 17 September 1879. The details on the verso of his carte-de-visite were written concerning this conviction date, completed in September 1879, and were taken from this record of discharge. Only his last sentence of 9 months is recorded for his conviction on 17 December 1878 . The original photograph, however, was taken at the Hobart Gaol, as the transcription below the image indicates. Wallace was photographed there, and may have been photographed by Nevin as early as 1872 or 1873, given the commercial qualities of the photographic execution. 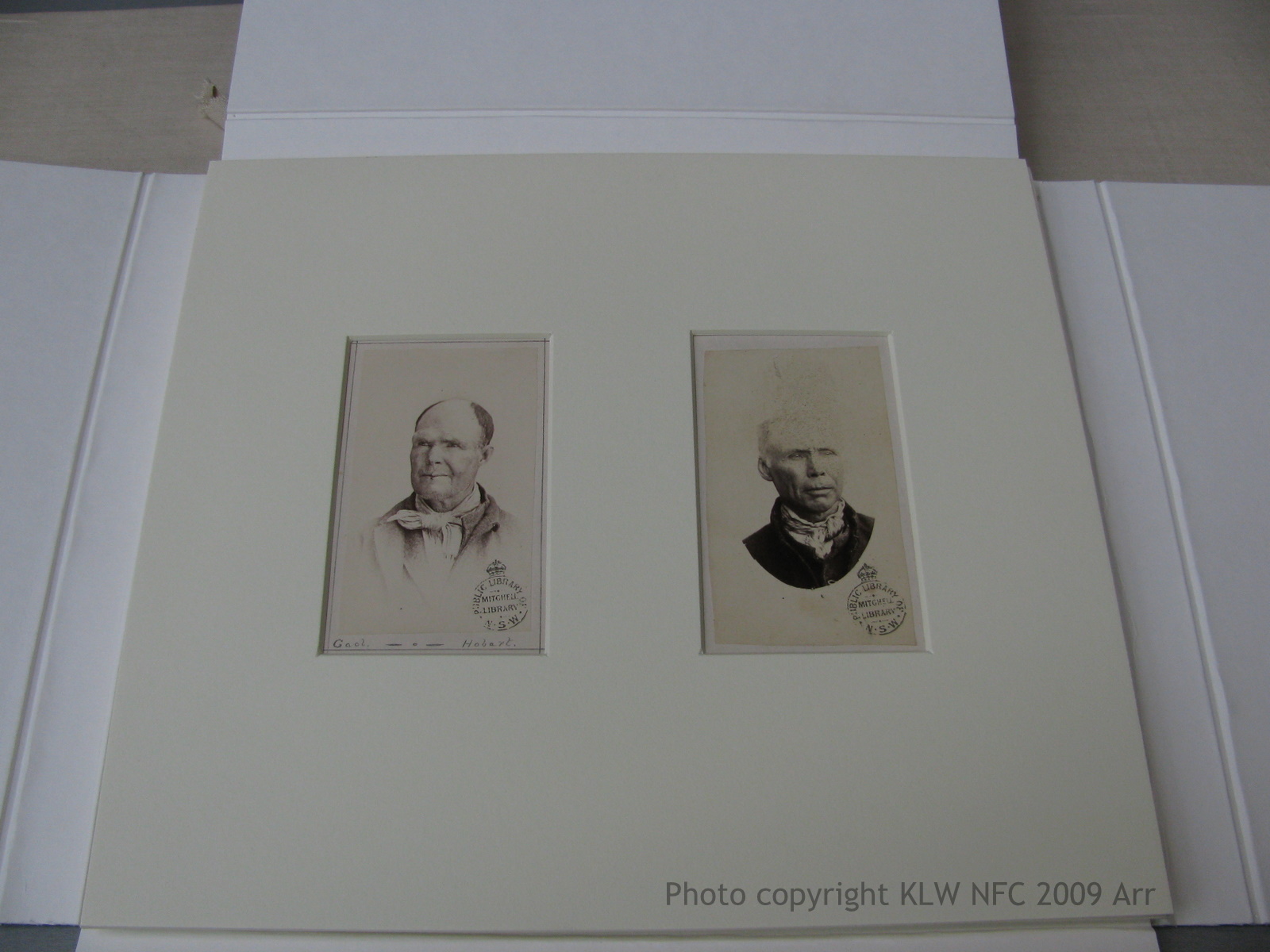 Carte-de-visite photographs of prisoners Edward Wallace (left) and Hugh Cowan (right)
Taken by Thomas J. Nevin at the Hobart Gaol between 1873 and 1878
Held at the Mitchell Library, SLNSW (PXB 274)
All photos © KLW NFC 2009 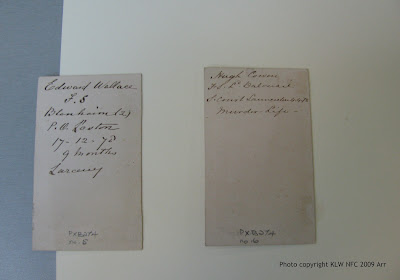