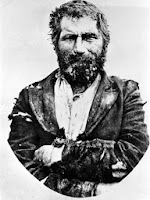 Thomas Harrison or Harris was suspected of larceny, published 27 September 1872 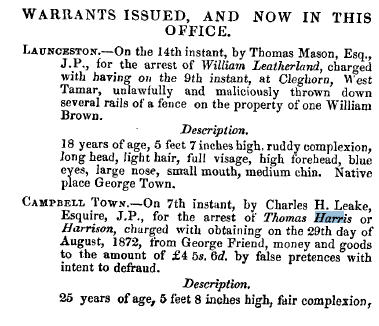 Thomas Harrison was photographed in this "booking" shot by Nevin on being received from Launceston at the Hobart Gaol in mid February 1874, per police regulations for a sentence of  three (3) months or longer. A serial thief, Harrison's sentences in early 1874 earned him a few months of incarceration and discharge on 22 April 1874. But by 1875, he was arrested at the Police Office, Sorell, for being idle and disorderly, and sentenced to another three months at the Hobart Gaol. This information appears on the verso of the photograph held at the Queen Victoria Museum and Art Gallery, viz: 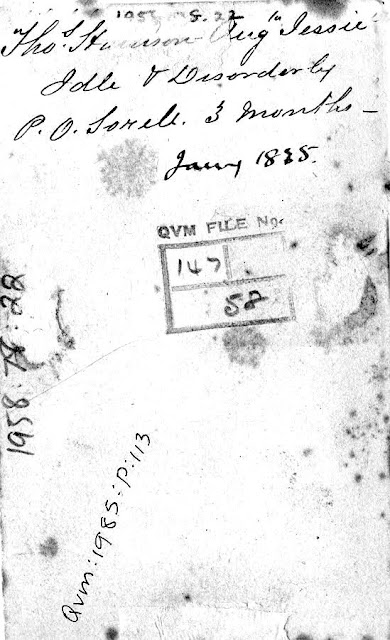 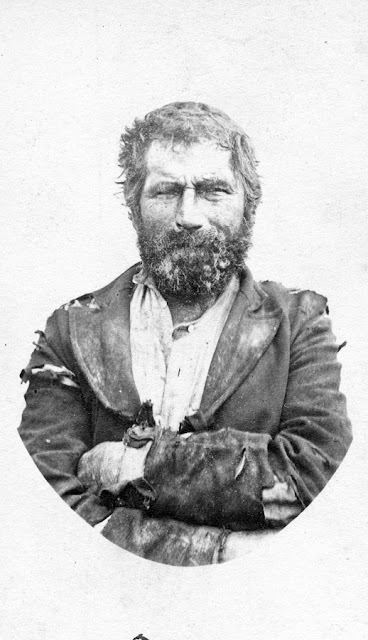 THE FATAL SHORE
Robert Hughes' book The Fatal Shore (1987) includes several prisoner ID photographs by Thomas Nevin which Hughes' publishers sourced from the Archives Office of Tasmania without attribution to Nevin, per this page of photographs: 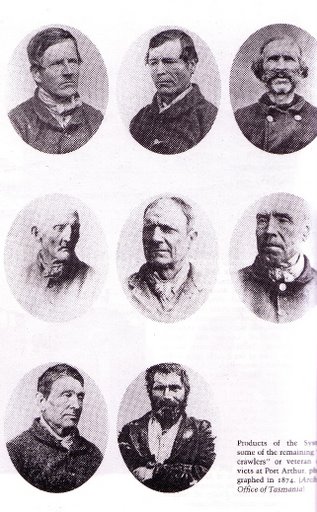 Page of photographs from The Fatal Shore, p. 450

One of those convict images - last on lower right - is of Thomas Harrison. It is the same image which was printed on the postcard to advertise the exhibition of the T. J. Nevin convict photos at the Queen Victoria Museum and Art Gallery in 1977, curated by John McPhee. Of the more than 100 photographs of Tasmanian prisoners which were exhibited from the QVMAG collection taken by Nevin, why the curator McPhee and the authors of Nevin's biographical entry Stilwell and Kerr (1922) made the choice of the photograph of Harrison is strange, since it is not typical of the majority of his prisoner photographs which demonstrate the same technical approach used in his vignetted commercial studio portraits of clients, patrons and family members. Possibly Harrison was chosen because of his defiant stare and tattered clothes, signifiers of desperation and social deviance.

The same image appeared again in Joan Kerr and G. Stilwell's entry for Thomas Nevin (1992:568) in the Dictionary of Australian artists : painters, sketchers, photographers and engravers to 1870 (ed) Joan Kerr. The convict is given the name "Thomas Harrison" and the provenance is given as the Queen Victoria Museum and Art Gallery. The Archives Office holds a copy either made at the same time as the original capture by Nevin in 1874 - copies were routinely circulated to police stations on the prisoner's discharge - or later, when copies of these cartes-de-visite of 18170s prisoners were circulated to other national collections (AOT, NLA, TMAG) in the 1980s-1990s: 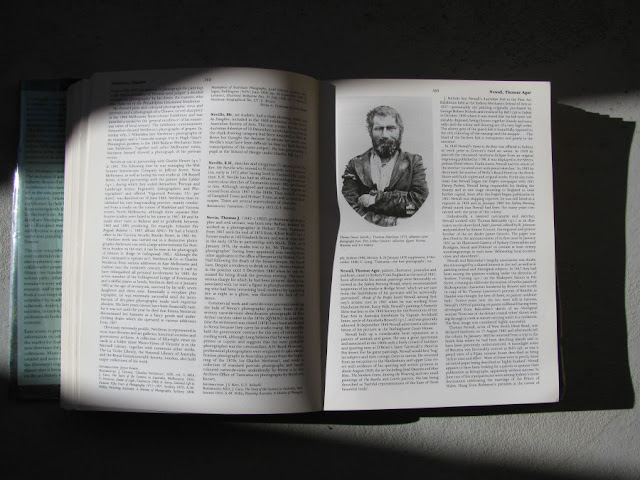 This convict is unnamed in the AOT Photograph Records for some reason. His photograph is subtitled "Convict unidentified - photograph taken at Port Arthur by Thomas Nevin" :

Robert Hughes states in his Introduction to The Fatal Shore (Harvill 1987).


"The idea for this book occurred to me in 1974, when I was working on a series of television documentaries about Australian art. On location in Port Arthur, among the ruins of the great penitentiary and its out-buildings, I realized that like nearly all other Australians I knew little about the convict past of my country. I grew up with a skimpy sense of colonial Australia.

Convict history was ignored in schools and little taught in universities - indeed, the idea that the convicts might have a history worth telling was foreign to Australians in the 1950s and 1960s.

Even in the mid-1970s only one general history of the System (as transportation, assignment and secondary punishment in colonial Australia were loosely called) was in print: A.G.L. Shaw's pioneering study Convicts and the Colonies.

An unstated bias rooted deep in Australian life seemed to wish that "real" Australian history had begun with Australian respectability - with the flood of money from gold and wool, the opening of the continent, the creation of an Australian middle class.

Behind the diorama of Australia Felix lurked the convicts, some 160,000 of them, clanking their fetters in the penumbral darkness. But on the feelings and experiences of these men and women, little was written. They were statistics, absences and finally embarrassments."