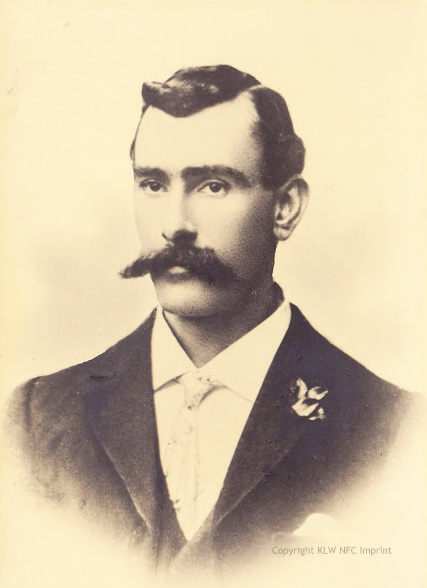 William John Nevin ( 1878-1927), photographed by his father in 1897,  was the fourth child and third surviving son born to photographer Thomas James Nevin and Elizabeth Rachel Nevin nee Day. He was born on the 14th March 1878 at the Hobart Town Hall where his father Thomas J. Nevin was employed as Office and Hall keeper for the Hobart City Corporation and photographer for the Municipal Police Office, having leased his photographic studio in 1876 at 140 Elizabeth St. Hobart, while maintaining a photographic practice and studio  at New Town, near Hobart, Tasmania with his younger brother Constable John Nevin. This son was thus named after his uncle, i.e. Thomas J. Nevin's younger brother, William John Nevin (1852-1891), known as Jack to the family, who worked on salary at the Hobart Gaol until his death from typhoid fever in 1891, (pictured here in plain clothes): 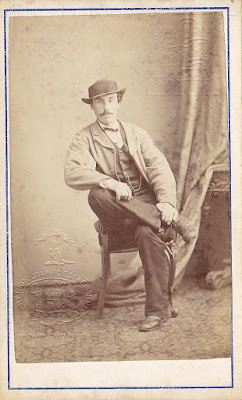 1905
Constable John Nevin's nephew William John Nevin may have been courting when he wrote "Yours Truly, Will" across this print ca. 1905, although he remained a bachelor living with his siblings up to his death in 1927. 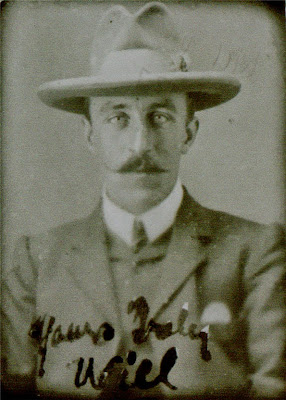 Here William John Nevin is sporting the style known as the gunslinger moustache. When this photograph was taken ca. 1905, he was listed on the Denison electoral roll as a shop assistant.

1920
William Nevin may have lost his temper in a kitchen, unleashing a series of expletives. His occupation was listed as "cook" when he was charged with using obscene language and photographed at the Police Office Hobart in December 1920. The charge "Obscene Language", of course, might have denoted any mild curse or epithet. These sorts of menial and trivial charges were a source of revenue for the State Government in an era when personal income tax was yet to be formally legislated. 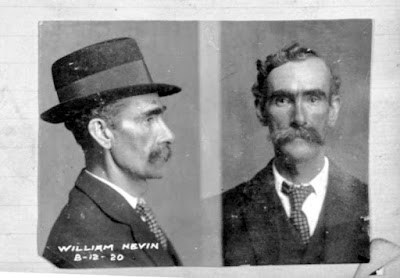 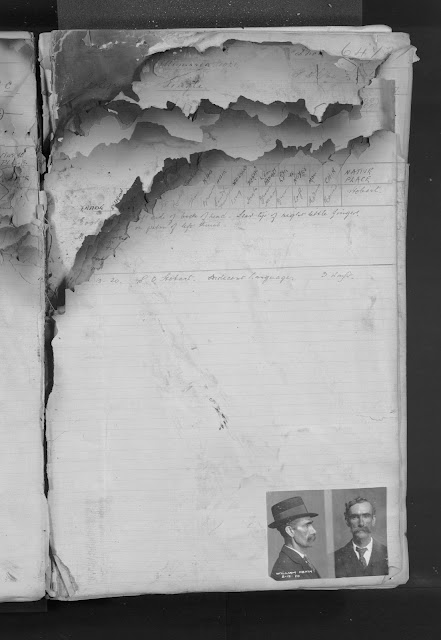 William Nevin, charged with obscene language on 8th December 1920, was sentenced to three days at the Police Office, Hobart. These police records in Book 7 were damaged by fire at the Hobart Gaol, but some detail is visible: William's occupation was "cook" in 1920, for example. His moustache had become a shaggy half-horseshoe once again.


... The story of the accident was told by Percy Johnson, a carter, living in Murray Street. On Tuesday night, about, about 8.20, he said, Nevin and a man named Leslie Smith came to his house under the influence of drink. Nevin's cart was standing outside the Waratah Hotel. Witness joined the two men, and had a drink with them in the hotel. Smith was not served with intoxicants, as "he has had too many." The three then got into the cart, and witness intended to drive the other two home. However, Nevin insisted on driving, and they went along Warwick Street and down Elizabeth Street at full gallop. They "pulled up" outside McLaren's Hotel, in Collins Street, and when they got out of the cart a man said to witness, "There are two sergeants on the corner watching you". Witness got the two men into the cart again, and took charge. Nevin and Smith sat down. Witness drove up Elizabeth Street until just before Warwick Street. Smith's legs were hanging over the back, and he said ,"Pull up. I am going to get out." Witness "pulled up" and Nevin and Smith got out. A few minutes later they got into the cart again. Nevin stood up and made a dash forward. He snatched the reins from witness, and fell over the side. Witness felt a bump, and when he got out he saw Nevin on the ground with the reins round his foot and his leg through the wheel. He drove Nevin and Smith to the Public Hospital... Dr. B. M. Carruthers, House Surgeon at the Public Hospital, said there were hardly any signs of external injury on the deceased when he was admitted to hospital. He was injured severely internally. His collar-bone was broken, a broken rib had pieced his heart,  Death was due, in the first place, to shock, and secondly, to collapse caused by haemorrhage.... 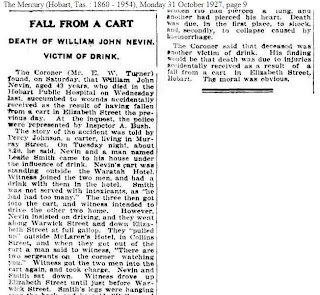 Fortunately, neither parent was alive to experience this loss: William Nevin's mother Elizabeth Rachel had died in 1914, and his father Thomas J. Nevin died in 1923. 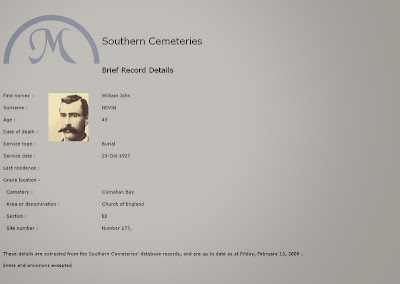 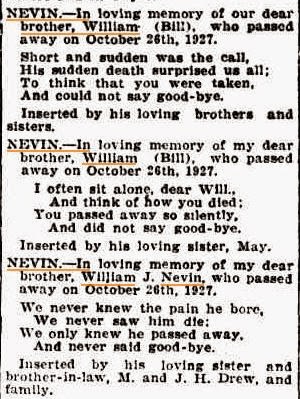 William Nevin's occupation was listed as "shop assistant" in the 1905 Electoral Roll for Denison, Tasmania, and his place of residence was the home of his parents, No. 236 Elizabeth-street, Hobart. By 1927 he was resident at the large property No.23-29 Newdegate Street, North Hobart (pictured below) which included two residences. At the time of his death, William was operating a horse and cart haulage and carrier business from the property at 23 Newdegate Street. Five of Thomas and Elizabeth Nevin's adult children periodically resided there at varying intervals right into the 1950s - Mary Florence Elizabeth (May Nevin), George Ernest (Georgie Nevin), Thomas James (Sonny Nevin), Mary Ann (Minnie Nevin) and Albert Edward Nevin - where they maintained and trained race horses, stables and vegetable gardens.

Descendants remember William's cartage business sign positioned at the gate next to the old house, visible in this photograph (sign on left) taken ca, 1933 of three of Thomas and Elizabeth Nevin's grandchildren, the children of Albert and Emily Nevin: Hilda, on extreme left, with Willie and Margaret outside the front door. 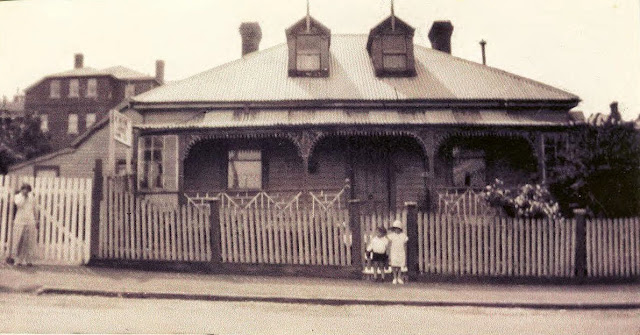 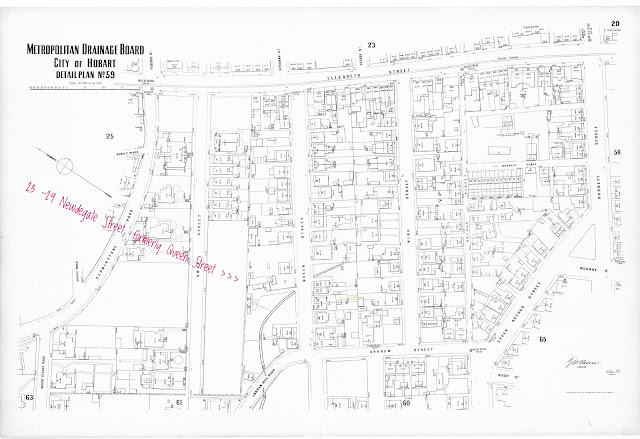 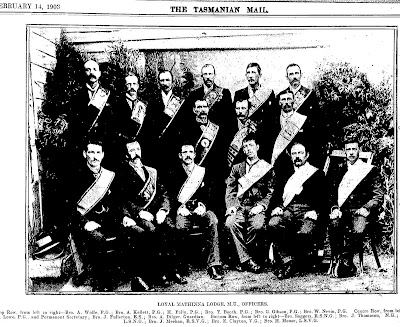