Michael Gilmore was a career criminal, or so it seems His convictions included burglary, larceny, indecency, idle and disorderly, feloniously wounding etc. He was in and out of prison on a regular basis from 1869. In October 1874 Thomas Nevin photographed him at the Hobart Gaol. These records include his convictions and discharges from 1874 to 1885. His aliases were Terence or Michael Moore. 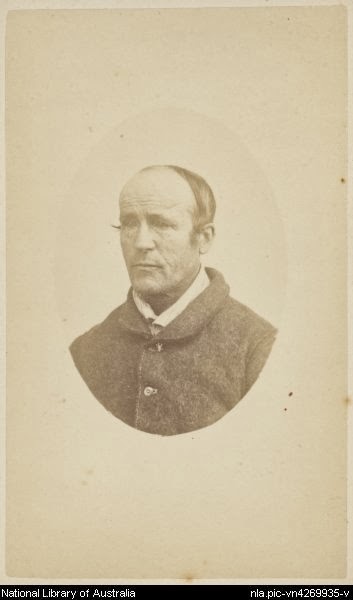 Michael Gilmore alias Terence Moore was arrested and photographed by Thomas J. Nevin on 15 October 1874 at the Hobart Gaol. 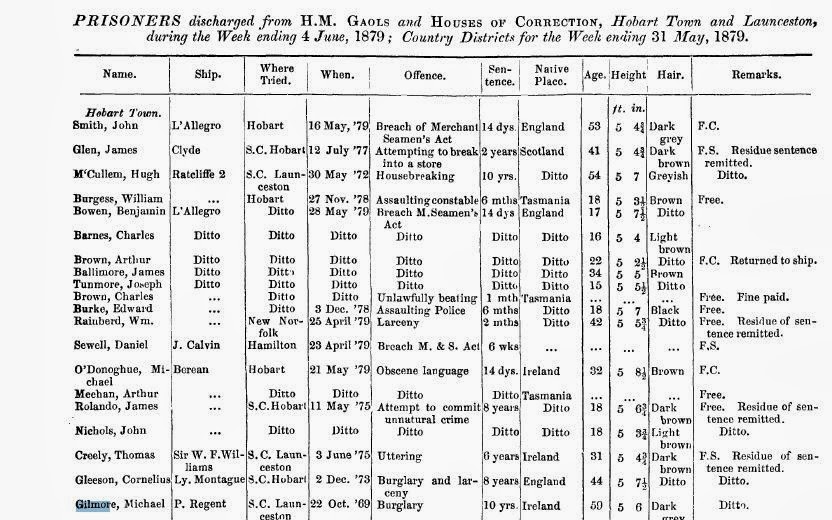 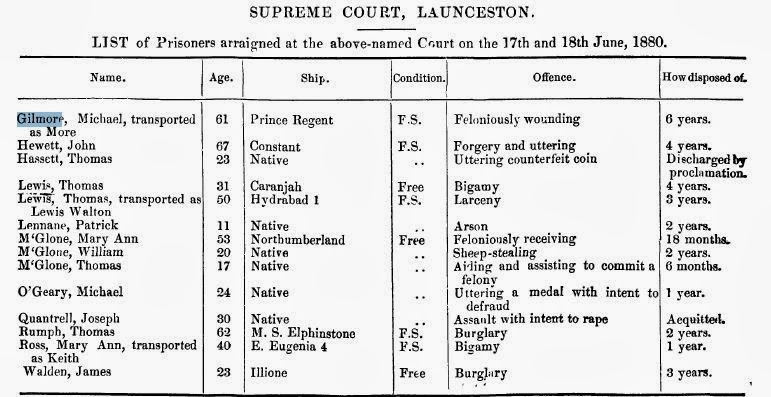 The other Micheal [sic] Gilmore; Photograph of James Kilpatrick
A second carte is held at the NLA of a different man, with the name spelt as Micheal Gilmore. Thomas Nevin photographed two men whom the archivist later named Michael or Micheal Gilmore, but Nevin would have known the identity of this man. The archivist ca. 1900 was trying to match the physical description of a man with a bald(ish) head - "crown of head bald" - from the police gazette notices to loose mugshots removed from their criminal record sheets, and came up with two choices. This man was possibly James Kilpatrick, photographed by Thomas J. Nevin between imprisonment at the Hobart Gaol in October 1874 and discharge from the Hobart Town Gaol in the week of 30 August, 1876. 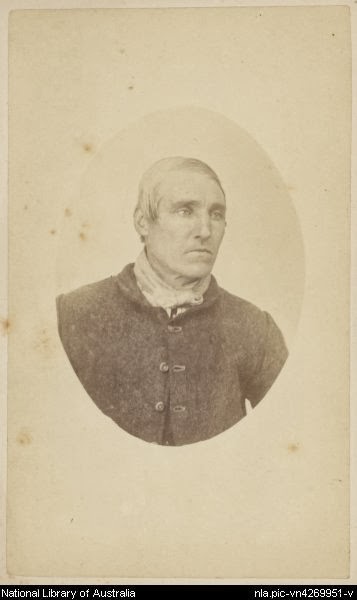 NB: This is more likely to be James Kilpatrick

"Kilpatrick is at present in H.M. Gaol at Hobart Town undergoing sentences, two years and five months of which are unexpired."

Thomas Nevin photographed James Kilpatrick in late October 1874 soon after arrest at the Hobart Gaol.This warrant was issued for James Fitzpatrick, 26 March 1875 while he was currently serving sentences for other offences.

James Kilpatrick, photographed by Nevin at the Hobart Gaol again on discharge from Hobart Gaol, 26 August, 1876. Kilpatrick was convicted again on 17 October 1876.

Addenda and Update
The information about Gilmore's criminal activities from the police gazettes, called Tasmania Reports of Crime Information for Police, James Barnard, Gov't Printer, is easily obtainable, so why was nothing but basic transportation records about this prisoner, Michael Gilmore (and the second man with a similar name) included in the National Library of Australia's publication of their Tasmanian "convict portraits", titled Exiled, The Port Arthur Convict Photographs (NLA 2011)? 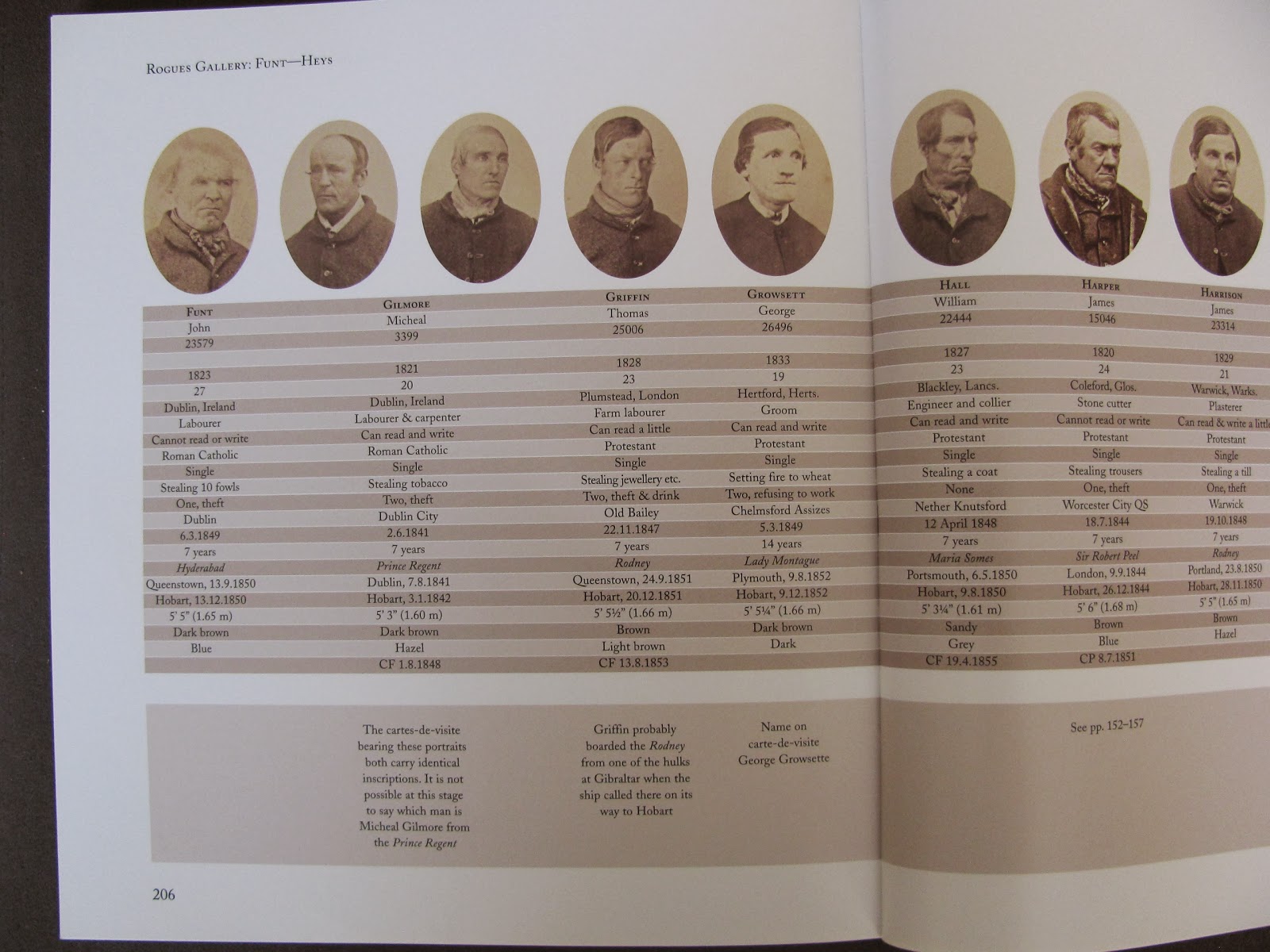 Above: The two convicts called Gilmore, printed here on page 206 of Exiled (2011). Basic information from the transportation records, nothing more, just the photographs.
Below: frontispiece, with the misleading sub-title.
Photos copyright © KLW NFC 2012 ARR 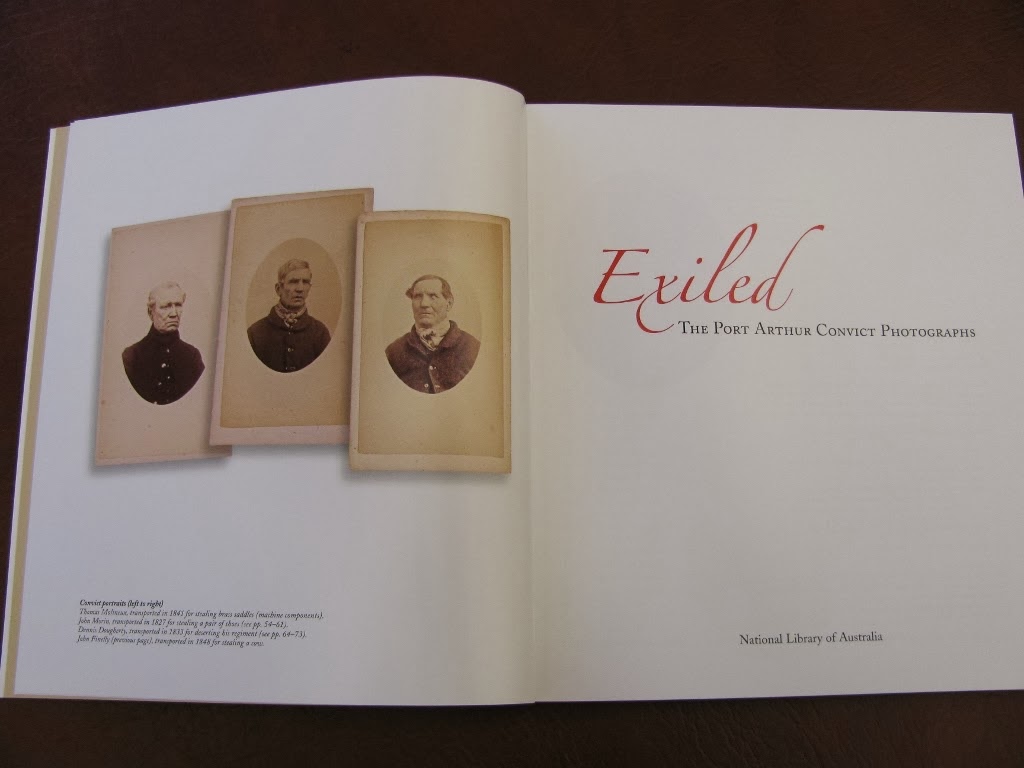 The reason is simply this: the NLA rushed into print with this book to regain copyright of their collection of "Port Arthur convicts" which currently numbers 84 photographs, seemingly under threat of a digital audience using weblogs such as this one. Sadly, the authors of Exiled had no interest or expertise in examining the PHOTOGRAPHS themselves as artefacts, despite the sub-title of the book. Furthermore, their attribution to Thomas J. Nevin as the photographer was compromised - not surprisingly - with Port Arthur tourism propaganda and fallacies about the non-photographer A.H. Boyd by the author's historical advisor, Hamish Maxwell-Stewart, as required by the masters who feather his nest with hefty grants and the students who worship at his feet. Tropes and whole chunks of text were plagiarised by Barnard and Stewart from these weblogs, and whatever information we chose not to display online, those gaps also appear as lacunae in the publication Exiled, yet no request for permission was received to liberally use our weblogs for their commercial purpose. The evidence is indicative here, for example, regarding this prisoner Gilmore. The information about Michael Gilmore which we had not published to accompany his photograph by 2011- but publish now in 2014 - is also missing from Exiled (see page 206 above). With all that government assistance entails, in terms of NLA staff, hours, funding, and glossy publishing, plus free research assistance provided by Maxwell-Stewart's students at the University of Tasmania, one could reasonably expect a better product and better practice from the National Library of Australia. Instead, they have politicised this particular collection of "convict portraits", and defamed those who question their ethics.