THE SUPINE SELF, THE FRIEND, AND HATS 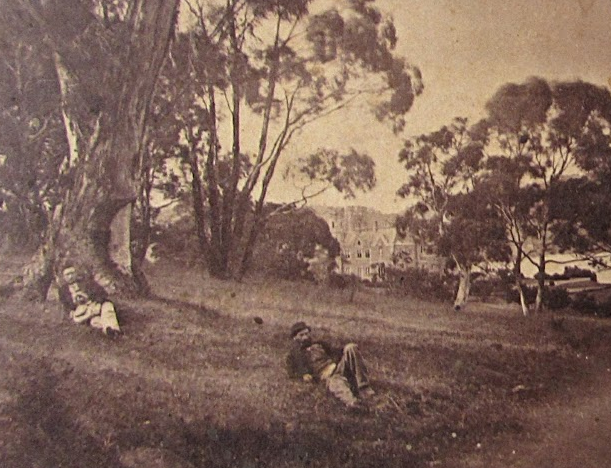 The small bowler hat and patterned waistcoat are unmistakeable, so is the beard. Is this a supine "selfie" or was Thomas J. Nevin and his friend photographed with his own camera at the Queen's Domain (Hobart) ca. 1870 by his brother Jack Nevin? 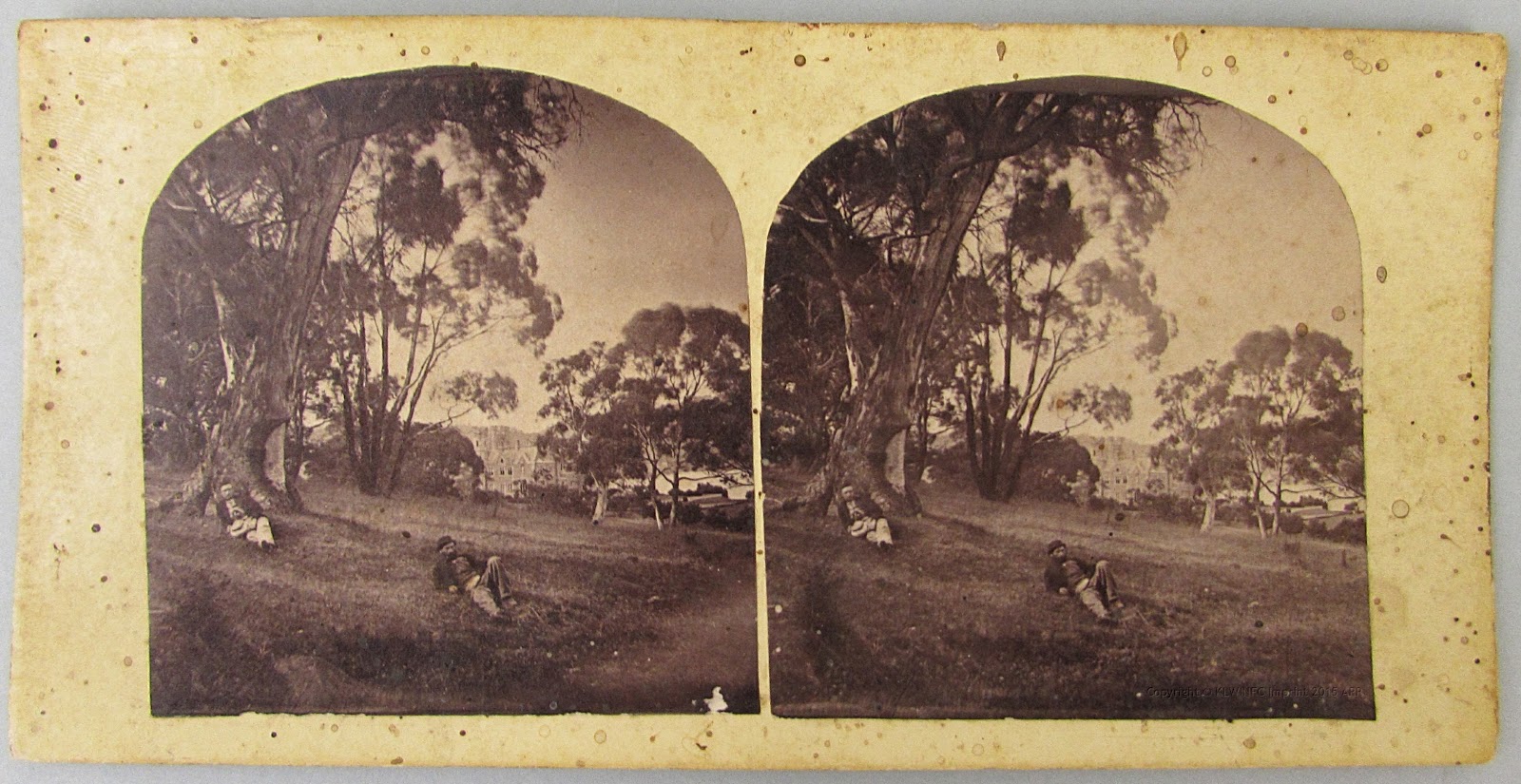 'Self-portrait' shutters were not introduced until the early 1900s so this photograph, or indeed many taken in the 1860s-70s, cannot strictly be termed a "selfie". The supine pose in these outdoor photographs of the period, of men in particular, was due partly to the size, the focal length, width and aperture of stereo lens types available and partly because a standing rather than reclining figure in the foreground deflects the eye from a distant focal point, which in this example was one carrying a salient message about Empire and Colonial stability, the new Government House (completed 1857). The invisible photographer was present in at least five extant photographs of Thomas J. Nevin in various poses and formats, held in family collections, and there may be several more in public collections waiting to be identified, such as this one first viewed at the Tasmanian Museum and Art Gallery, November 2014.

The other man in the image who leans on an elbow in front of the twisted trunk of a tree is holding the very distinctive white hat with a broad rim and floppy crown banded in black worn by so many adults in Nevin's early stereographic images. Were they signifying membership of the Mechanics Institutes, or perhaps they were Terpsichoreans from one of the Wesleyan Lodges? Or was it simply the most fashionable summer headwear for men in 1868? Dozens of men in this stereograph (below) wore the striking white hat, taken on a public holiday at one of many events celebrating the 49th birthday of Queen Victoria (27th May 1868). 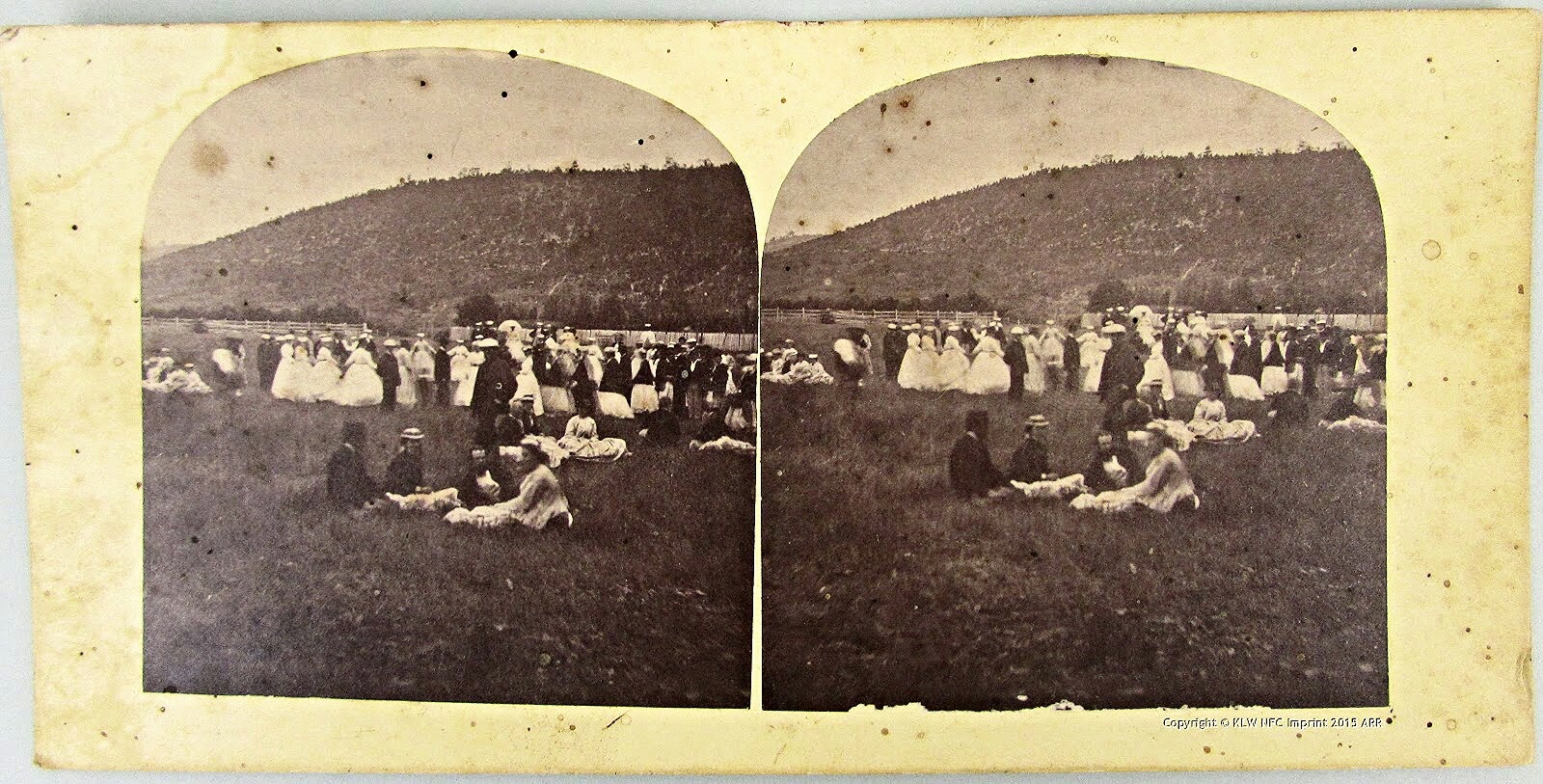 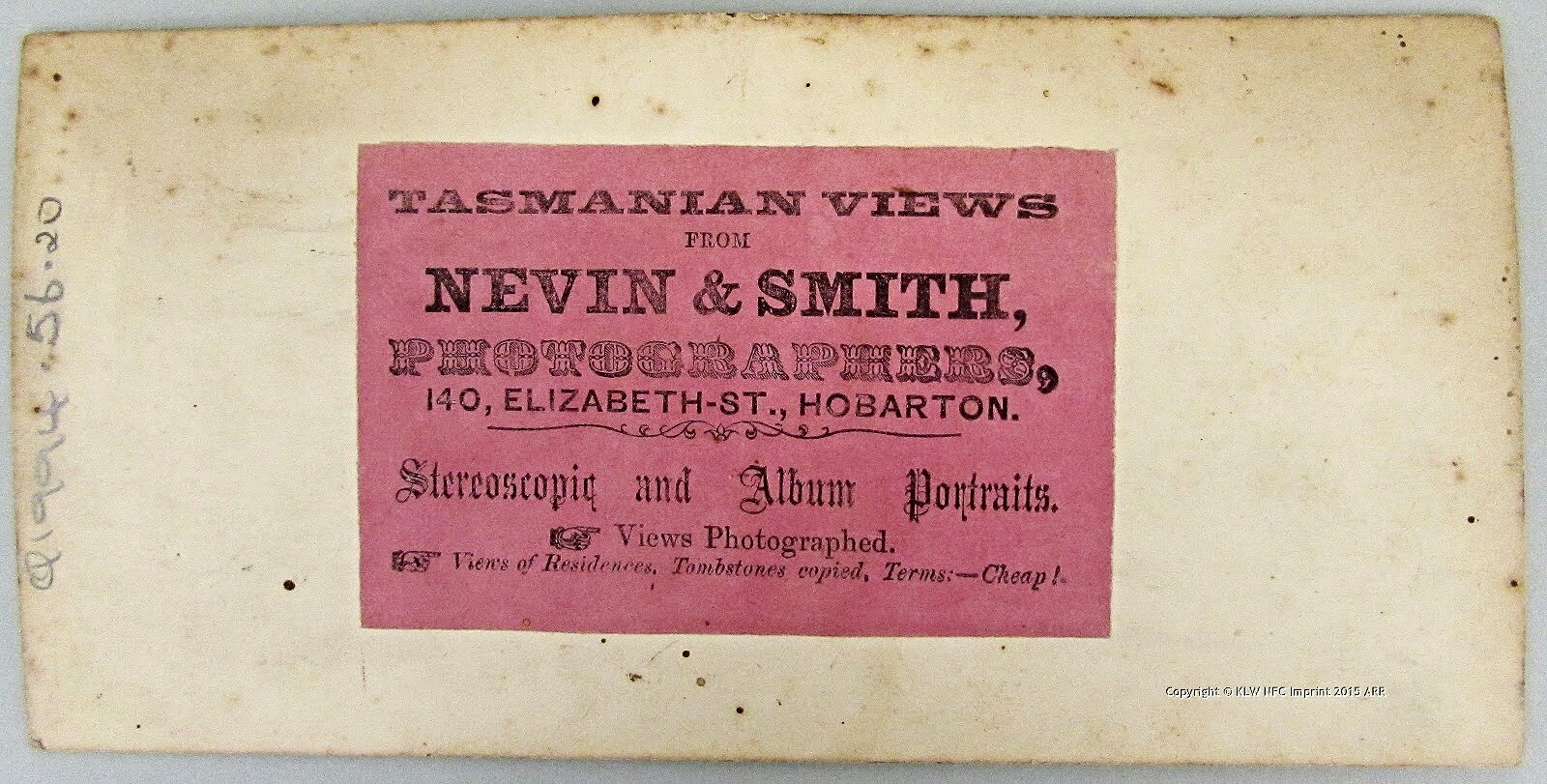 The Mercury, 28th May 1868, reported a dancing party at Rosny, and a spot of bother: 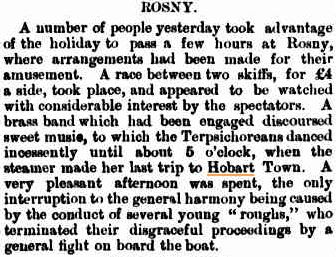 
ROSNY.
A number of people yesterday took advantage of the holiday to pass a few hours at Rosny, where arrangements had been made for their amusement. A race between two skiffs, for £4 a side, took place, and appeared to be watched with considerable interest by the spectators. A brass band which had been engaged discoursed sweet music,  to which the Terpsichoreans danced incessantly until about 5 o'clock, when the steamer made her last trip to Hobart Town. A very pleasant afternoon was spent, the only interruption to the general harmony being caused by the conduct of several young "roughs," who terminated their disgraceful proceedings by a general fight on board the boat. 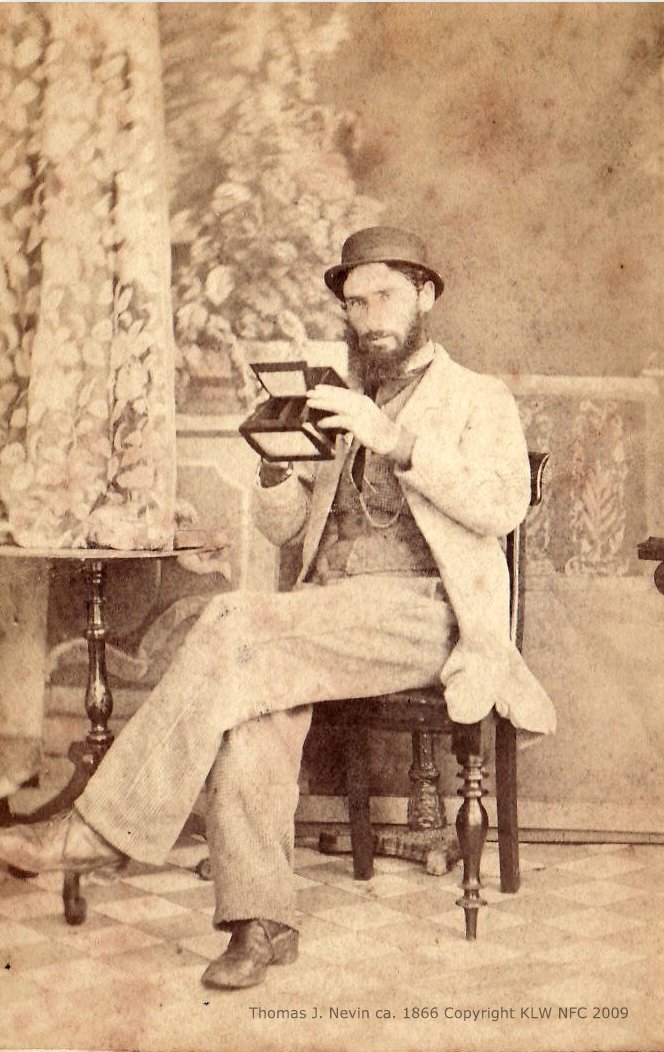 In this photograph Nevin posed next to his big box table stereoscopic viewer resting on the distinctive table with the griffin-shaped legs, left arm holding the same hat. 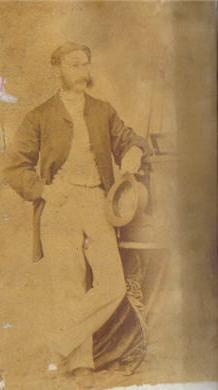 The subject of these three photographs (below) and the one in company with Nevin supine on the Queen's Domain is possibly the same man. The first bears verso one of Thomas Nevin's New Town studio stamps from the late1860s, and is held at the Tasmanian Museum and Art Gallery. The verso is heavily inscribed in biro by a descendant of Mr. D. Chisholm, a schoolteacher. 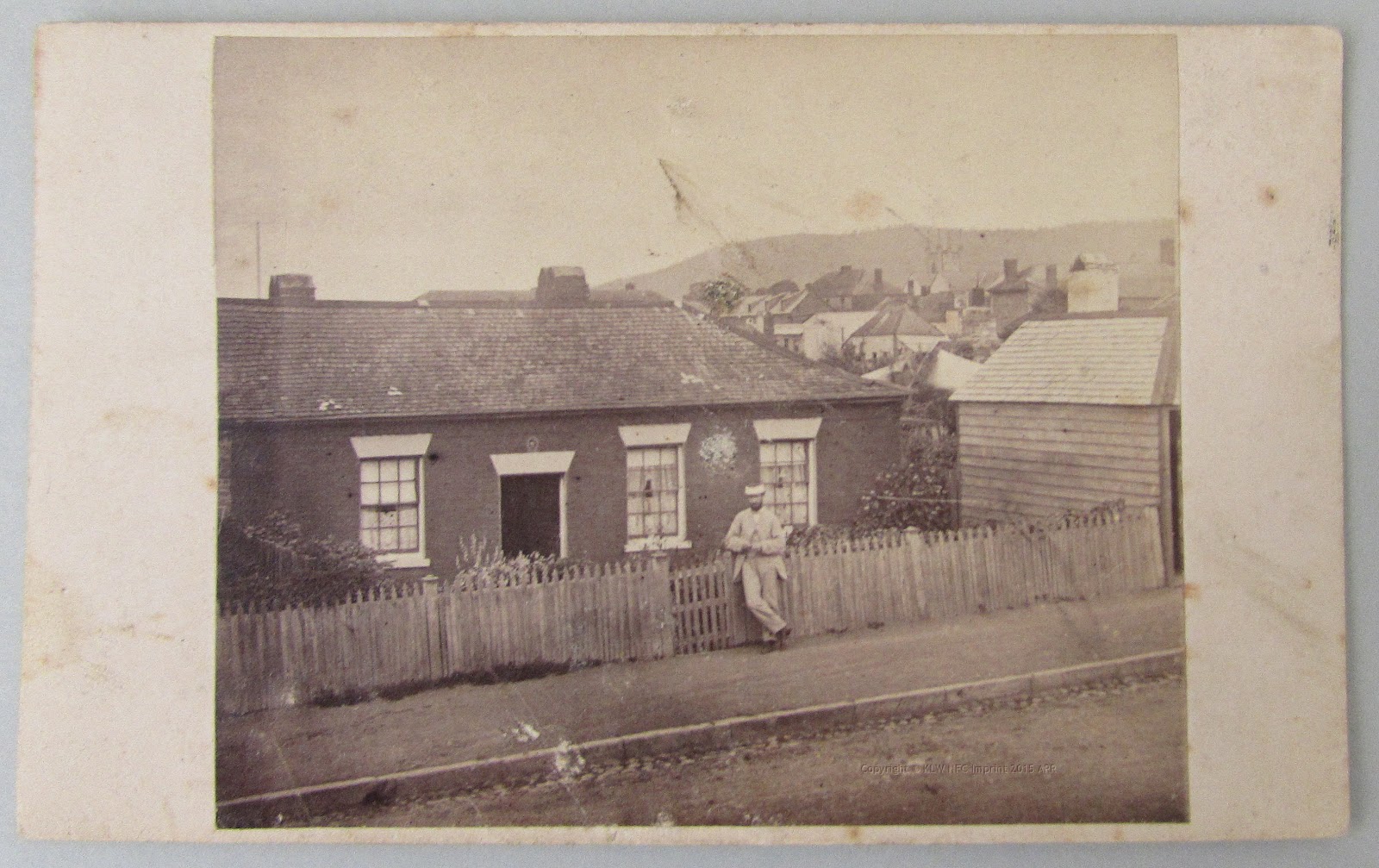 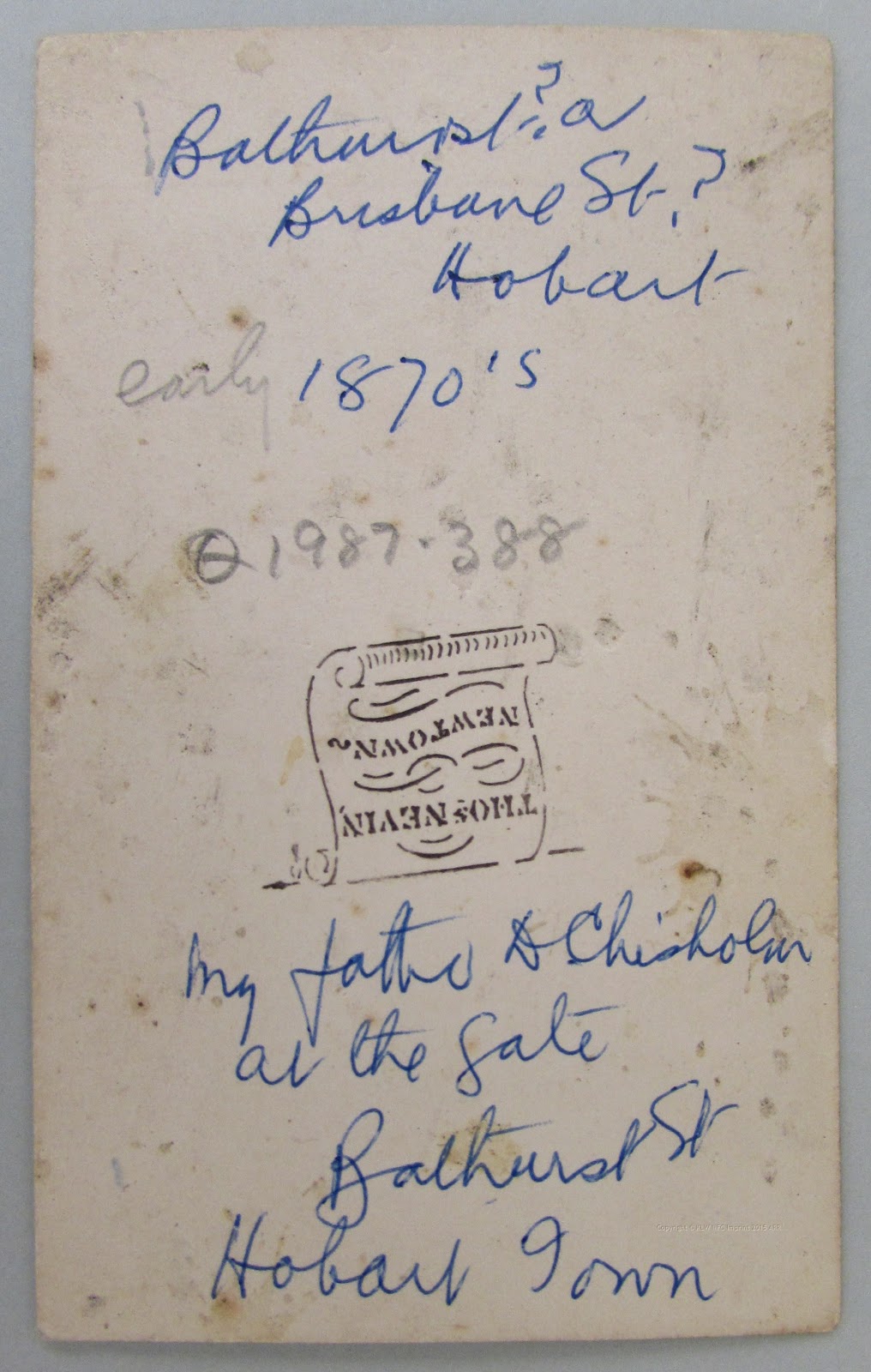 This is the same photograph printed as a stereograph in a buff mount, minus Nevin's stamp verso or transcription, which he may have printed for private or experimental use. Many of these unstamped stereographs were acquired from Nevin's studio stock by later photographers such as the Anson brothers and J. W. Beattie, whereas those inscribed with notes that identify the client or ownership were acquired from private collectors before ending up in public collections. 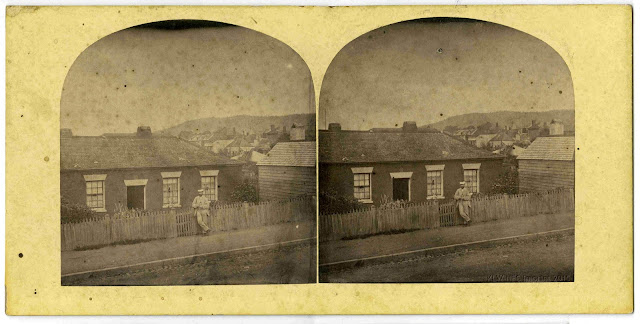 These two show a supine Mr. Chisholm [?] photographed on the Domain in his summer suit and hat foreground, and another, taken at the same spot but at a different time using different lenses, with Government House clearly visible in the distance. Tree branches close by at top right is a common motif in Nevin's photographs. Although attributed to Samuel Clifford (State Library of Tasmania), two photographers may have been present. The stereograph on a yellow mount with diagonal corners was probably taken and printed by Nevin, and the second was taken by Clifford, or possibly reprinted by Clifford for Nevin's clients between 1876-1878. Both subjects of these images may be the same man who appears in several of Nevin's photographs, and may have been a friend of the teachers in his family, John Nevin (father), and Mary Ann Nevin (sister). 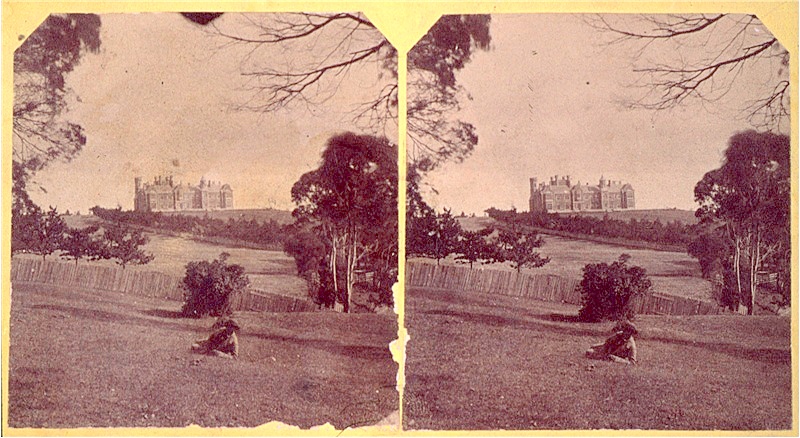 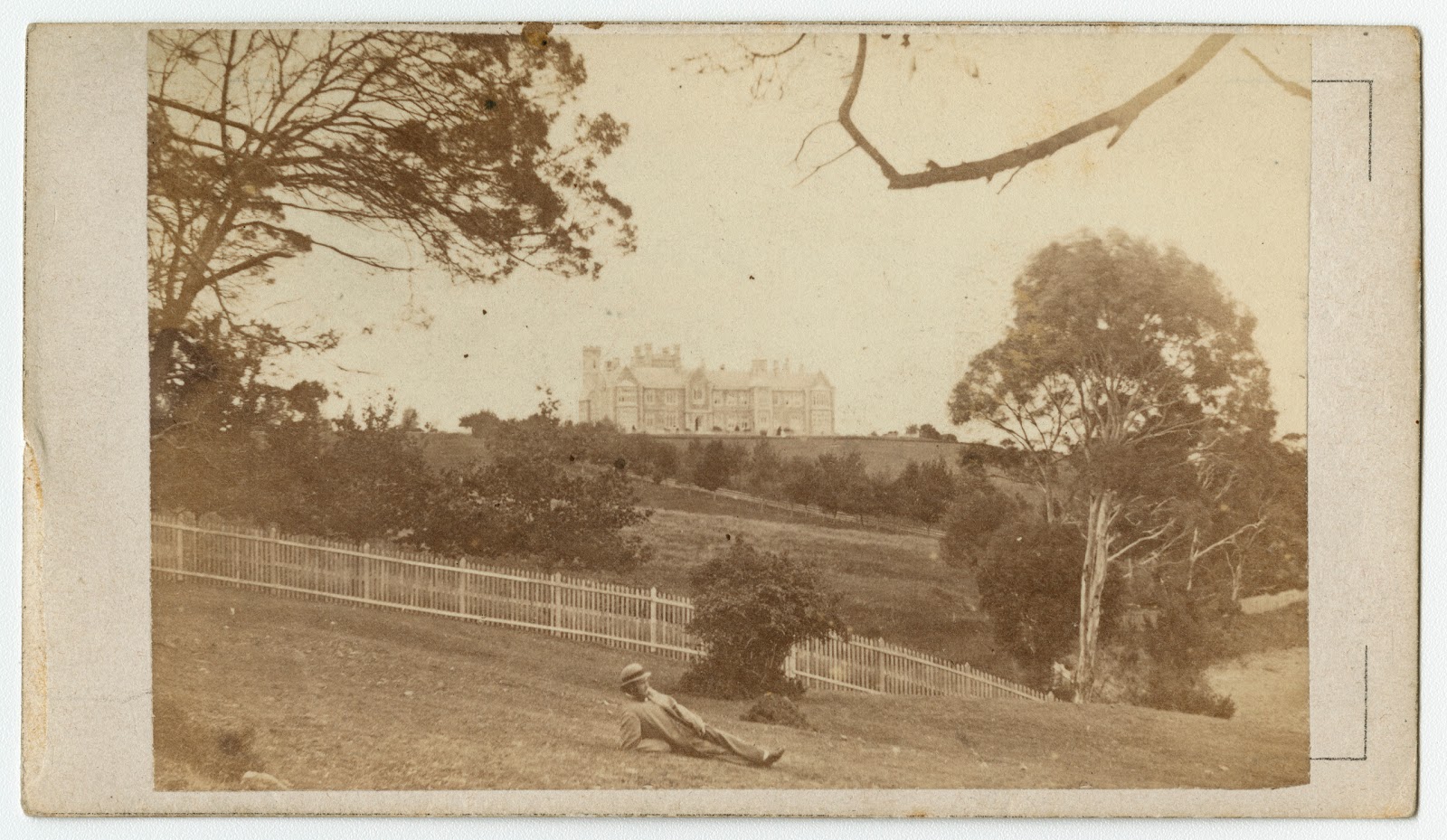 In this stereograph, also taken from the Queen's Domain of Government House, the foreground focal point is the caretaker's white cottage and the stumps of two trees. Those branches in top left of the frame appear again and again as a favourite motif in Nevin's landscape photography. 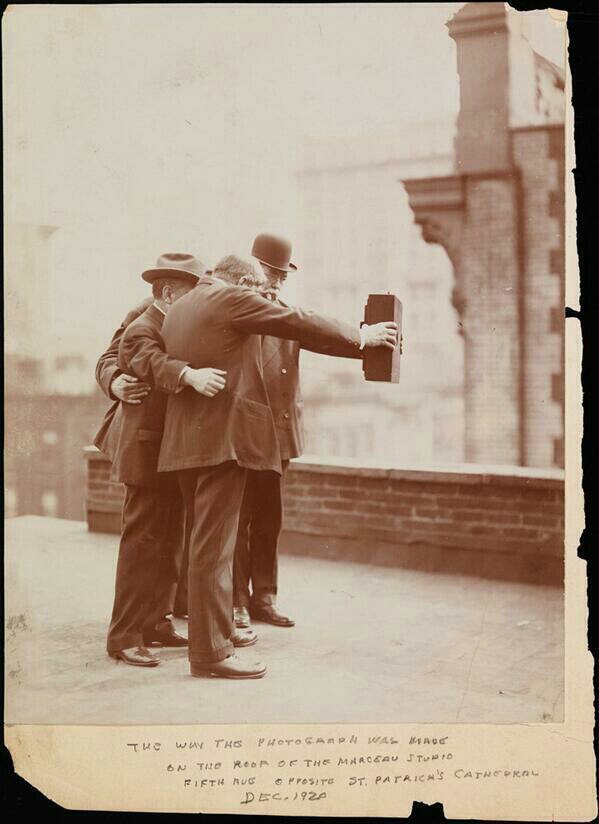 Caption: "The Way the Photograph was made on the Roof of the Marceau Studio Fifth Ave Opposite St. Patrick's Cathedral Dec. 1920'".
Source: Janet Carding at Twitter