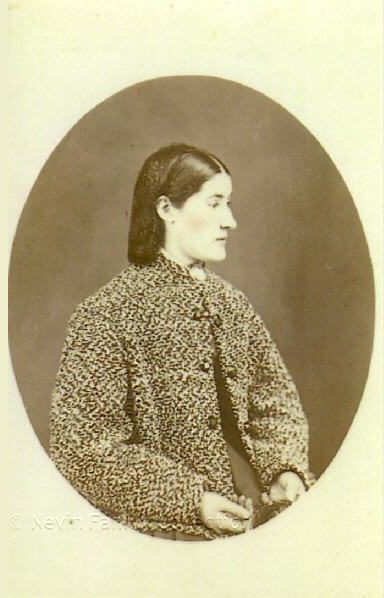 This photograph of Mary Ann Nevin was taken by her brother Thomas Nevin circa 1873. Some hand-tinting in rose is evident on the cheeks.

Mary Ann Nevin, born near Belfast Ireland in 1844, arrived in Hobart in 1852 with her mother Mary Nevin nee Dickson, her brother Thomas Nevin (b.1842), her sister Rebecca Nevin (b. 1847), and younger brother William John (Jack) Nevin (b.1852). All four children were under twelve years old.

Mary Ann was placed on the sick list of the Fairlie, on the voyage out, on 23 April 1852, together with her mother, and in the company of some of the 290 convicts and Parkhurst prison boys on board. She was listed as "child of guard". See this article here and this article here on this site for the sick lists.

Their father John Nevin snr worked their passage as a warden on the convict ship Fairlie. The Nevin family settled in Kangaroo Valley (the name changed to Lenah Valley in 1922) north of Hobart on a farm with orchards stretching down to the Franklin Museum and adjoining the Wesleyan Chapel.

CLEVER MARY ANN NEVIN
Until recently, little was known about Mary Ann Nevin. She won a Spelling Bee held at the Oddfellows Hall which was reported in the Mercury on 25 September 1875. Some of words the contestants were required to spell were difficult indeed and some are archaic today.

Local historian Trevor Wilks published a history of Kangaroo Valley-Lenah Valley in 1995, and included an account of a terrible accident suffered by Mary Ann Nevin on her father's farm at Kangaroo Valley.

According to his source - Mrs Lola Marshall, who was Thomas Nevin's grand daughter (daughter of his daughter Mary Ann - known as "Minnie Drew") - Mary Ann was savaged by a cow, and pulled through the bushes. After ten minutes of screaming, a man called Delaney came to her rescue, but she suffered injuries sufficient to warrant medical attention. The incident was reported in The Mercury 1st February 1873.


CARR-NEVIN.- On the 3rd May, at the Wesleyan Chapel, Kangaroo Valley, by the Rev. N. Bennett, John Carr, son of the late Captain Jas. Carr, to Mary Ann Nevin, only daughter of Mr. John Nevin, Kangaroo Valley.

Thirteen months later, she was dead. She died, aged 34 yrs, at Sandridge in Victoria, of causes unknown.


CARR. - On July 27, at her residence, Sandridge, Victoria, in the 34th year of her age, Mary Ann, the beloved wife of John Carr, the only surviving daughter of Mr. John Nevin, Kangaroo Valley, New Town. 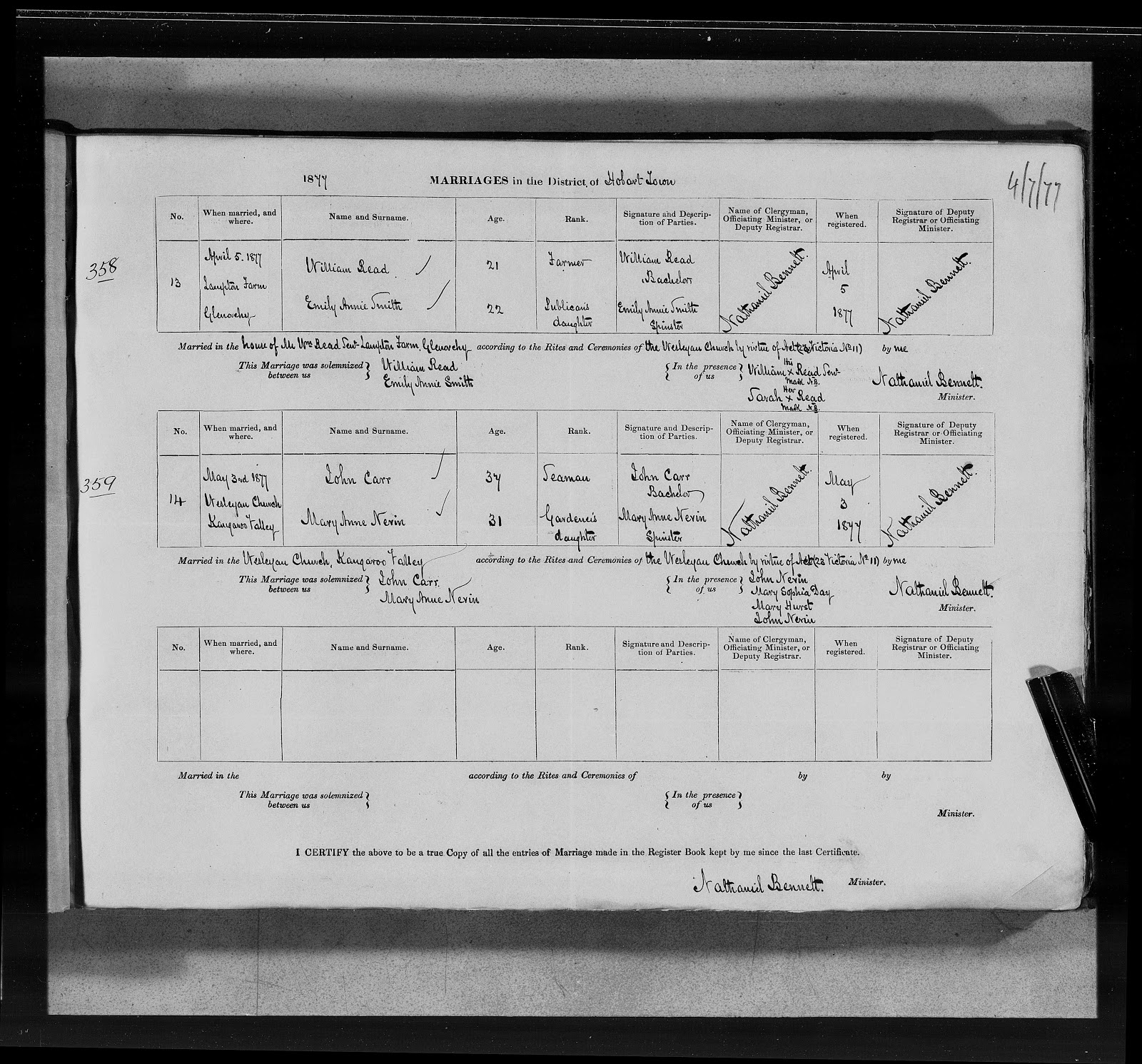