William Robert Giblin was a neighbour of the Nevin family in Augusta, the village at Kangaroo Valley and he was the Nevin family solicitor. When the business partnership between Thomas Nevin and Robert Smith was dissolved in 1868, Giblin underwrote the liabilities of their firm Nevin & Smith, photographers, 140 Elizabeth St. Hobart Town and ensured that Nevin could continue to operate as a commercial photographer by offering him the commission of prisons and police photographer under tender for the Colonial government.

A photograph taken by Thomas Nevin of  Giblin ca. 1872  is held at the Archives Office of Tasmania. It carries an early Nevin studio stamp commonly used until the beginning of 1873. This photograph was retained by Giblin amongst his government documents in the Treasury during his terms as Attorney-General and Premier. 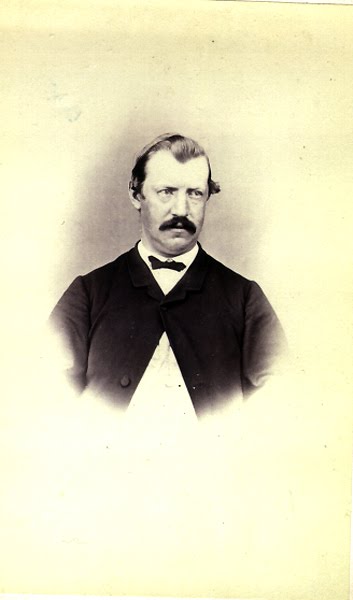 When William Robert Giblin died in 1887, a search was conducted for a suitable photograph to use as the basis for a portrait in oils, to be executed preferably by a London artist. The following letter to the editor appeared in The Mercury [July ?]1887 from someone calling himself "Mechanic" who knew where a suitable photograph could be found: in TREASURY, i.e. this photograph, which was the only one taken by a commercial photographer for government records. The article clearly was written by the photographer himself, so it can be assumed that "Mechanic" was no other than Thomas Nevin. 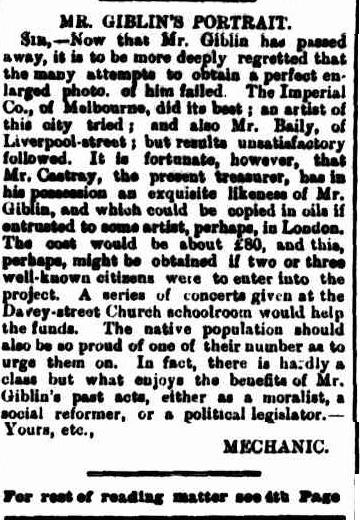 MR. GIBLIN'S PORTRAIT
SIR,- Now that Mr. Giblin has passed away, it is to be more deeply regretted that the many attempts to obtain a perfect enlarged photo. of him failed. The Imperial Co., of Melbourne, did its best; an artist of this city tried; and also Mr. Baily, of Liverpool-street; but the results unsatisfactory followed. It is fortunate, however, that Mr. Castray, the present treasurer, has in his possession an exquisite likeness of Mr. Giblin, and which could be copied in oils if entrusted to some artists, perhaps, in London. The cost would be about ₤80, and this, perhaps, might be obtained if two or three well-known citizens were to enter into the project. A series of concerts given at the Davey-street Church schoolroom would help the funds. The native population should also be proud of one of their number as to urge them on. In fact, there is hardly a class but what enjoys the benefits of Mr Giblin's past acts, either as a moralist, a social reformer, or a political legislator. -
Yours, etc.,
MECHANIC 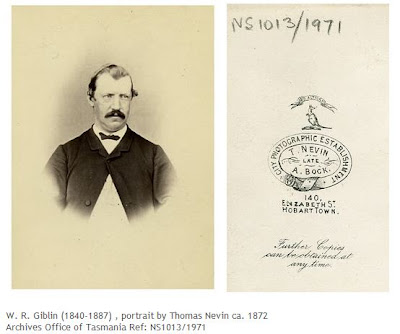 Courtesy of the Archives Office of Tasmania
NS1013/1971


In 1864, William Giblin joined the law firm which was called, for a while, Dobson & Giblin. Giblin entered politics in 1870, and became Premier in 1878 until 1884. John Mitchell joined the firm in 1875 and it became Dobson and Mitchell. The law firm's name took on its final appearance in 1886, when Cecil Allport entered the partnership. He became a keen collector of books, manuscripts and pictures which later formed the nucleus of the Allport Library and Museum of Fine Arts. This connection continues to the present day through the firm's role in administering the Allport Bequest and representation on the Allport Library and Museum of Fine Arts Management Committee.

W. R. Giblin was Tasmanian Administrator for a month during 1886. He was also Attorney-General in August 1873, and Premier in 1878, and 1879 to 1884.  Thomas Nevin's commission to photograph prisoners at the Port Arthur and Hobart Gaols was underwritten by W. R. Giblin in August 1873 on gaining the portfolio of Attorney-General  in the government changeover. These documents, and a bundle of vignettes and glass negatives by Nevin of convicts (i.e. Tasmanian prisoners) were among the materials in the Allport Bequest until relocated to the Archives Office of Tasmania*.

Thomas J. Nevin and W.R. Giblin were also members of the Loyal United Brothers Lodge. Nevin was a committee member for the Lodge's annual ball, and may have taken this informal group photograph at one of the Lodge's important functions.W.R Giblin is second from viewer's left, back row, his left hand resting on the shoulder of Parliament librarian Hugh Munro Hull.The group included Messrs Allport and Dobson (seated on floor), Walker, Backhouse, Meredith et al.The photograph, held at the State Library of Tasmania, is unattributed. 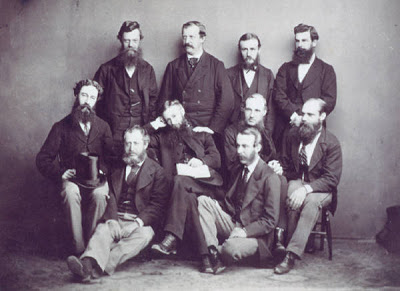 W.R Giblin is second from viewer's left, back row 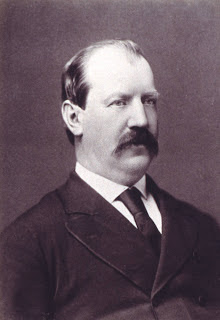 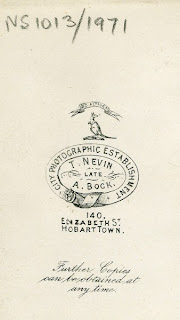 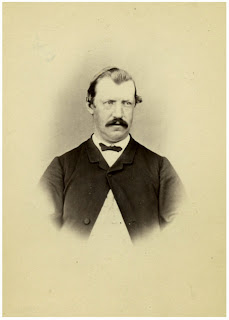