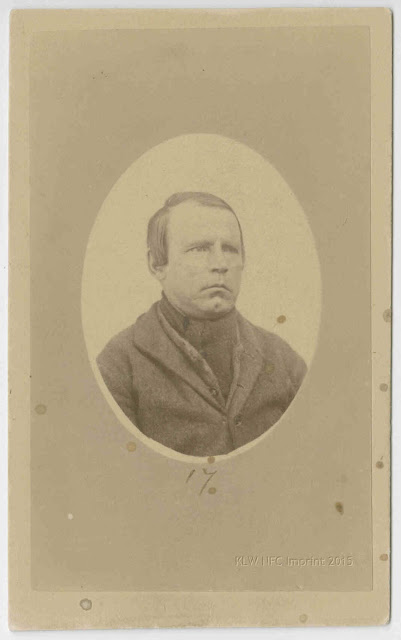 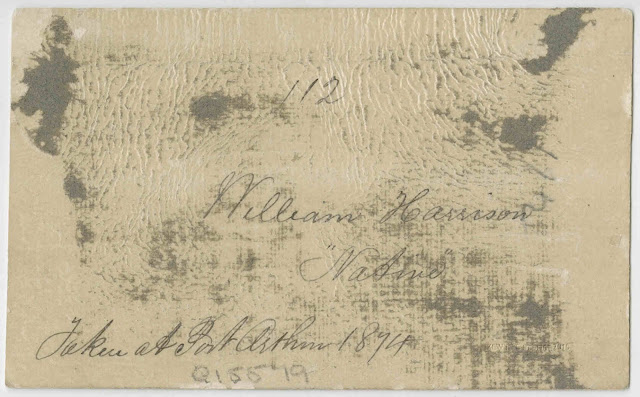 This prisoner was locally born, designated "native" meaning he was not a felon convicted before 1853 when transportation to Tasmania ceased. He was not in prison in 1874. He was photographed by Thomas J. Nevin on discharge from the Hobart Gaol in August 1873 . The transcription "Taken at Port Arthur 1874" was applied universally across the versos of dozens of these 1870s mugshots in the early 1900s for exhibition and sale to tourists in the collection of convictarian John Watt Beattie at his "Port Arthur Museum" located in Hobart. His collection was donated to the Queen Victoria Museum and Art Gallery, Launceston in 1930 from where copies such as the two below were distributed to other state and national collections.

Convicted on his own confession ...

William Harrison as Taylor, was tried at the Recorder's Court Launceston and charged on 26 May 1870 with uttering a forged cheque on his own confession. He was sentenced to four years. He may have served time at the Port Arthur prison although his name was not listed among the 109 prisoners on short term who were tabled in Parliament to be returned to the Hobart Gaol by July 1873. William Harrison was discharged from Hobart and photographed by Thomas J. Nevin on 27 August 1873.

On the 8th January 1875, a warrant was issued for William Harrison's arrest for failure to join the whaling vessel Marie Laurie. The name "Taylor" was included in the warrant, which may have been an alias, as was the name "Forster" which may have been Charles Brown's alias. William Forster and/or Charles Brown was also photographed by Thomas J. Nevin when Forster/Brown surrendered himself at the Hobart Gaol, Campbell Street. 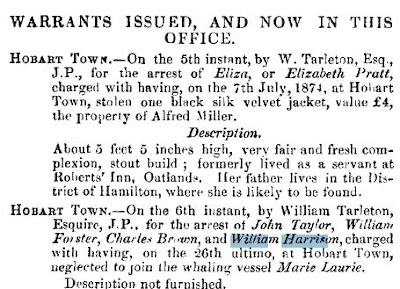 
HOBART TOWN, - On the 6th instant, by William Tarleton, Esquire, J. P., for the arrest of John Taylor, William Forster, Charles Brown, and William Harrison, charged with having , on the 26th ultimo, at Hobart Town, neglected to join the whaling vessel Marie Laurie, Description not furnished.

The National library of Australia holds this print, a copy of the same image held at the Tasmanian Museum and Art, with the same information transcribed verso. 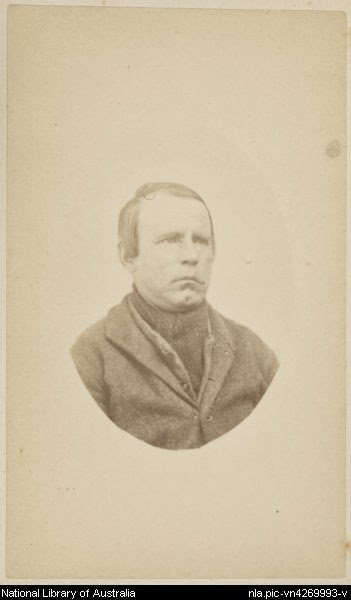 A torn black & white copy of the original taken by T. J. Nevin (the TMAG and NLA collections) is held at the Port Arthur Historic Site with incomplete details. 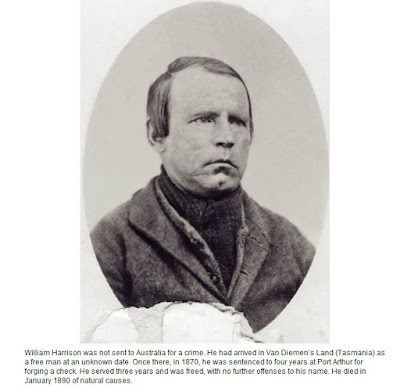