Several duplicates of Thomas J. Nevin's carte-de-visite, and one unmounted print from his negative taken at his only sitting with prisoner Peter Killeen in 1875, are extant in public collections. 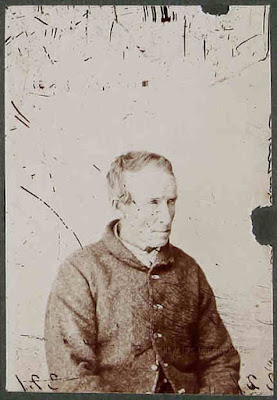 This is a print from Thomas Nevin's glass negative of the photograph taken of Killeen at the one and only sitting in 1875, reproduced many times over Peter Killeen's long criminal career.

The black and white print from an earlier reproduction in the 1900s of Nevin's original negative was reproduced at the Queen Victoria Museum and Art Gallery in 1985 where it is held. The original negative was salvaged, probably by government photographer and collector of convictaria, John Watt Beattie with his assistant Edward Searle, from at least two sources in the 1910s: the Sheriff's Office at the Hobart Gaol, and the Mayor's Court at the Hobart Town Hall where Thomas Nevin was Office Keeper and photographer of repeat offenders discharged with various conditions. The negative bears the number "321", visible when the image is flipped, not "221". All three numbers of these three extant photographs - numbers "321", "180" and "221"are the work of archivists in the 1900s and later in the 20th century.  The negative numbered "321" was a sequence used when Beattie reproduced the half plate in the 1910s, whereas the cdv's were Nevin's original duplicates, numbered by Beattie or an archivist in the 1920s-1930s purely for exhibitions (eg. 1934 at the Mechanics Institute, Launceston ) and visitors to Beattie's Port Arthur Museum (e.g. 1916 -1927), located in Hobart. The same archivists also transcribed the versos of the cdv's with a generic date, 1874, and Port Arthur as the generic prison, purely to engage the attention of museum visitors. In many, many instances, the prisoner was not photographed in 1874, nor was he sent to Port Arthur, and even if his sentence for further offences in the 1870s was to be served again at Port Arthur if a former transported convict, he was photographed at the Supreme Court and Hobart Gaol on sentencing prior to returning there, photographed by Thomas Nevin in Hobart, assisted by his brother, Gaol Messenger, Constable John Nevin. 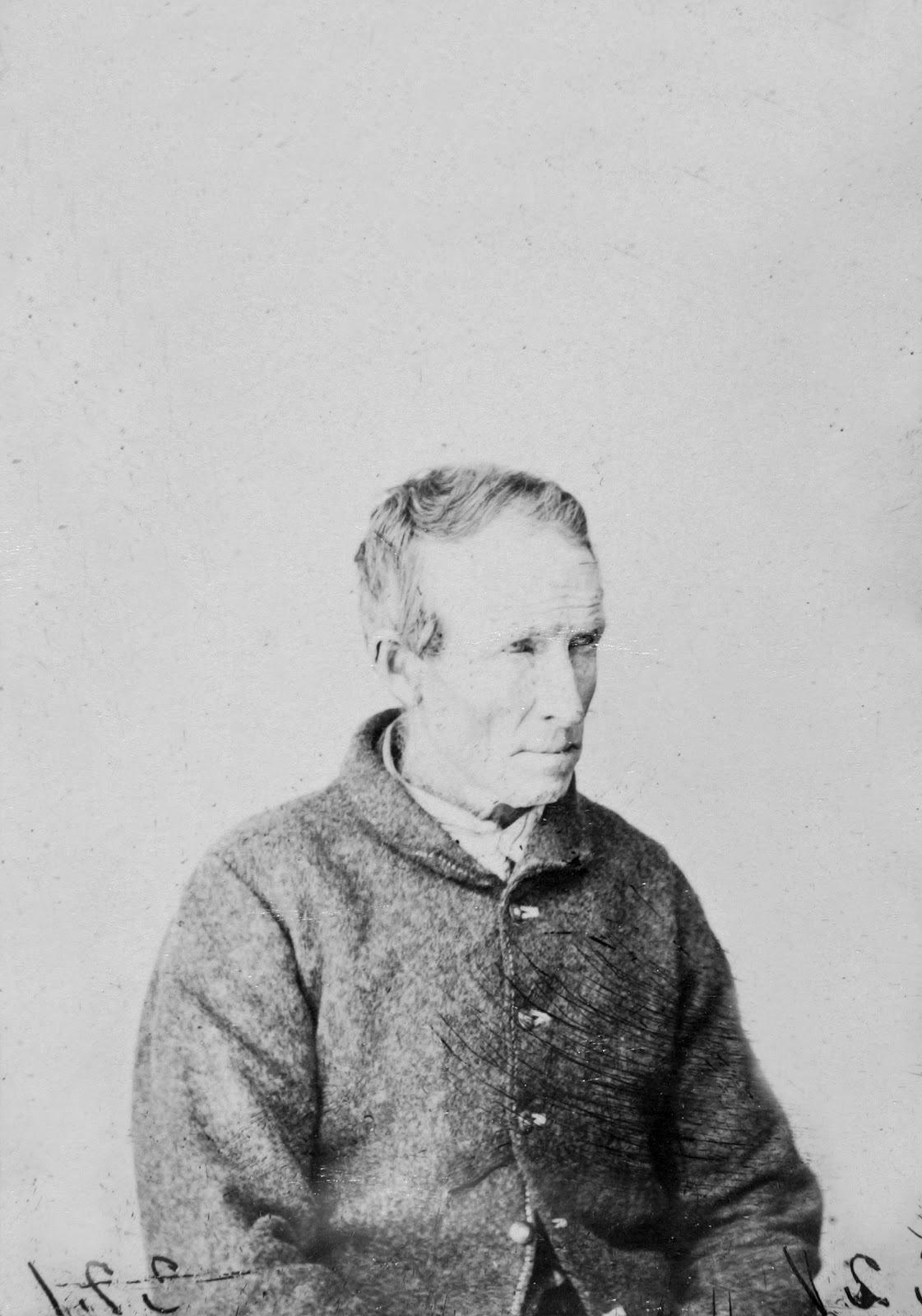 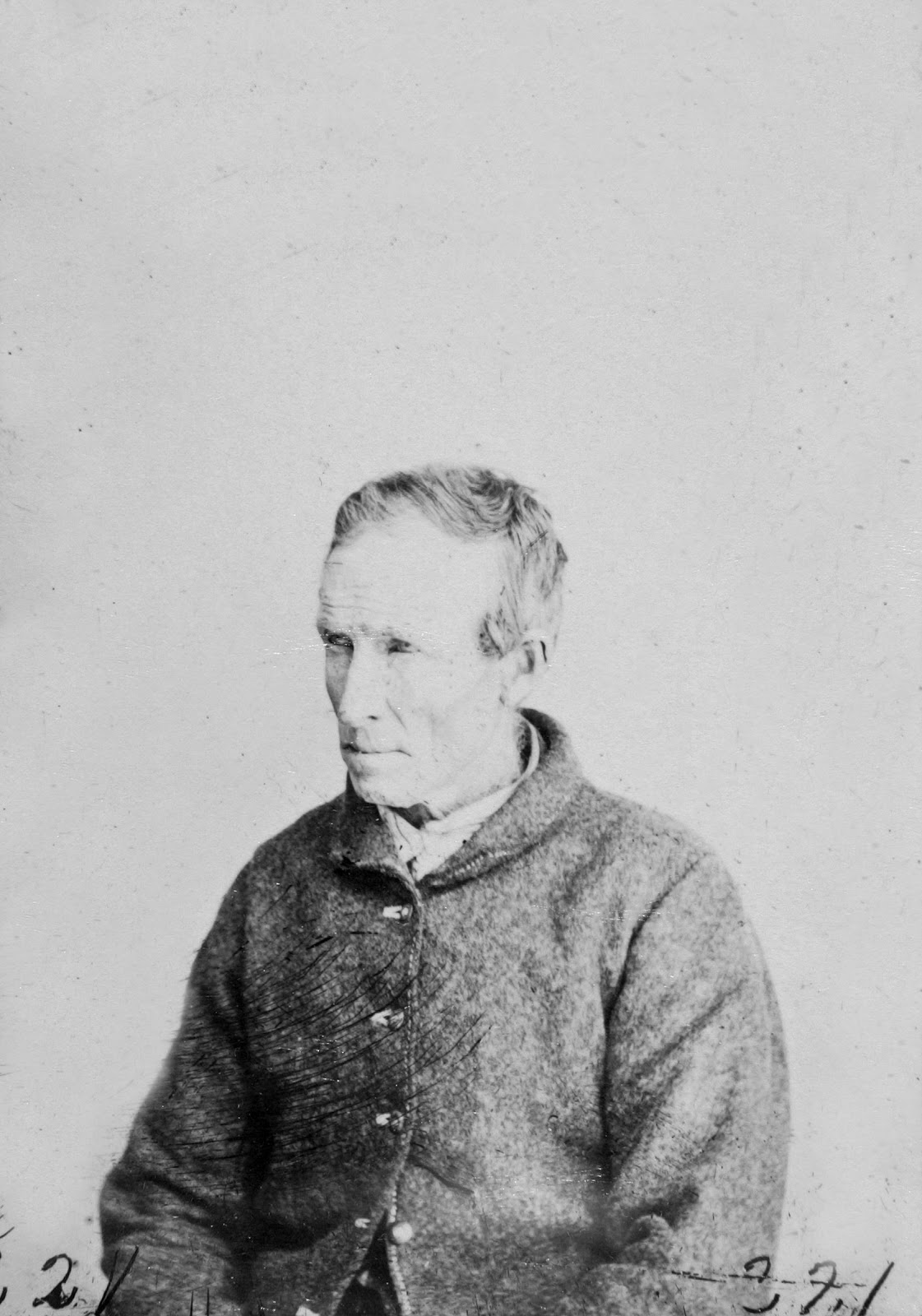 Thomas Nevin printed Killeen's photograph as a carte-de-visite in an oval mount when Killeen was discharged with a ticket-of-leave from Hobart in January 1875. Nevin produced up to six duplicates of this cdv, one of which was pasted to the prisoner's criminal record sheet, a blue form used by the Hobart Gaol. Others were kept loose to accompany police registers held at the central Municipal Police Office at the Hobart Town Hall, maintained by Nevin to furnish details for the weekly publication of the police gazettes, and others were circulated to regional police offices where the prisoner was assigned to work. This carte-de-visite of Killeen is held at the National Library of Australia. It was donated from government estrays in the 1964, already bearing the number "221". Another duplicate of the one and only photograph taken by Thomas Nevin in 1875 of Peter Killeen is numbered "180" and held at the QVMAG, acquired through Beattie's estate on his death in 1930. 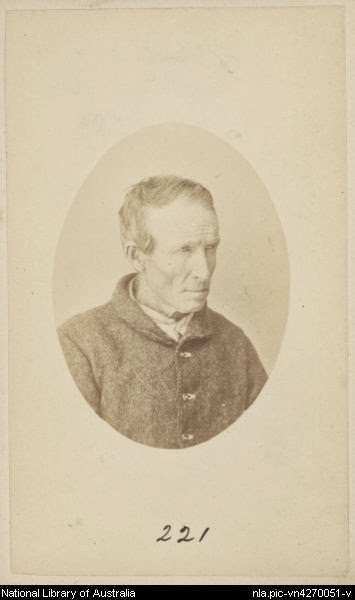 Another duplicate from Nevin's original is held at the Queen Victoria Museum ad Art Gallery, bearing the number "180" on recto, but "221" on verso. 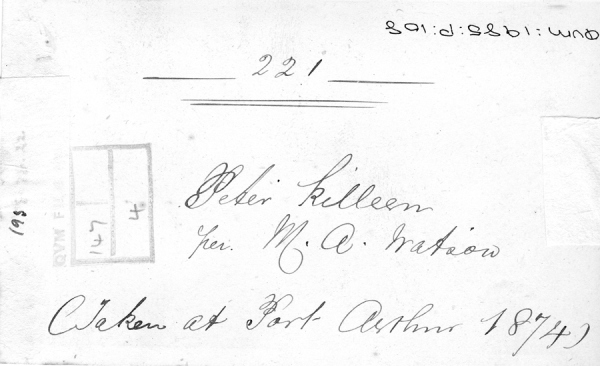 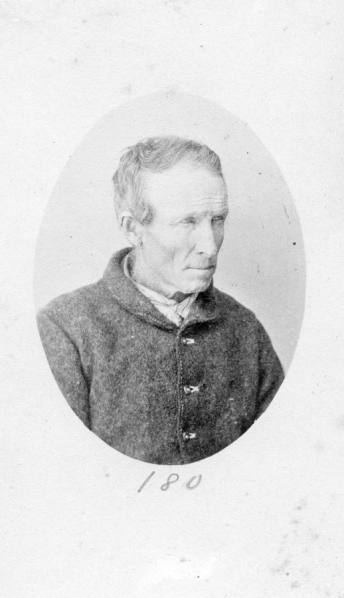 See also the Archives Office of Tasmania for Killeen, not Killern (on the verso of the NLA copy). More than one copy of the same image taken by Nevin was printed from Thomas Nevin's negative, and each carte-de-visite was numbered differently by archivists in the name of tourism at a date later (1900s) than the original single capture (1875). 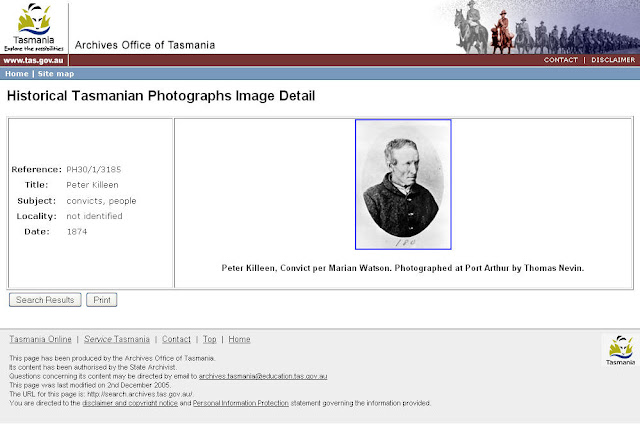 POLICE RECORDS
Peter Killeen was given a life sentence for assault and robbery in 1856, discharged from the Hobart Gaol in January 1875. He was 64 yrs old.

Released with a Ticket-of-leave on  29th January 1875, Killeen was photographed on discharge by Thomas Nevin at the Municipal Police Office, Town Hall, Hobart. However, Killeen reoffended, was sentenced to a further 6 weeks and discharged again on 29 September 1875.

Peter Killeen was discharged on 20th September, 1875, from the Hobart Gaol. The cdv bearing the number "221" was used for records when Peter Killeen offended again within six months of discharge. He was given a sentence of 7 years for larceny  at the Supreme Court Hobart on 8th March, 1876, sent to the Port Arthur prison, arriving there on 6th April, 1876, and transferred back to the Hobart Gaol on 17th April, 1877. The only image, whether extant as duplicates, cartes-de-visite and negative prints surviving from his criminal sentences is the one taken by Thomas Nevin at his sitting with the prisoner in January 1875. 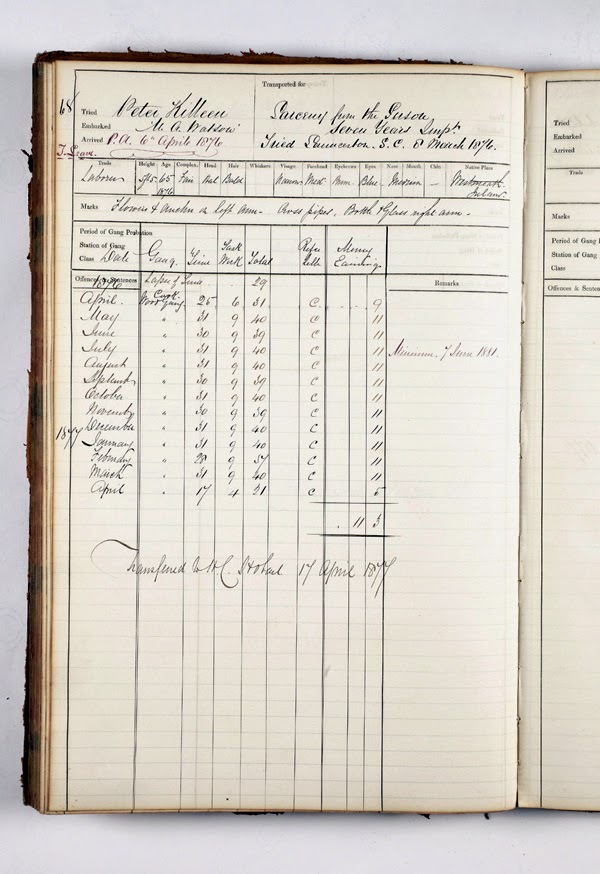 Peter Killeen died from senile decay, aged 76 yrs, as a Prisoner of the Crown at the Hobart Gaol on 27th June, 1889: 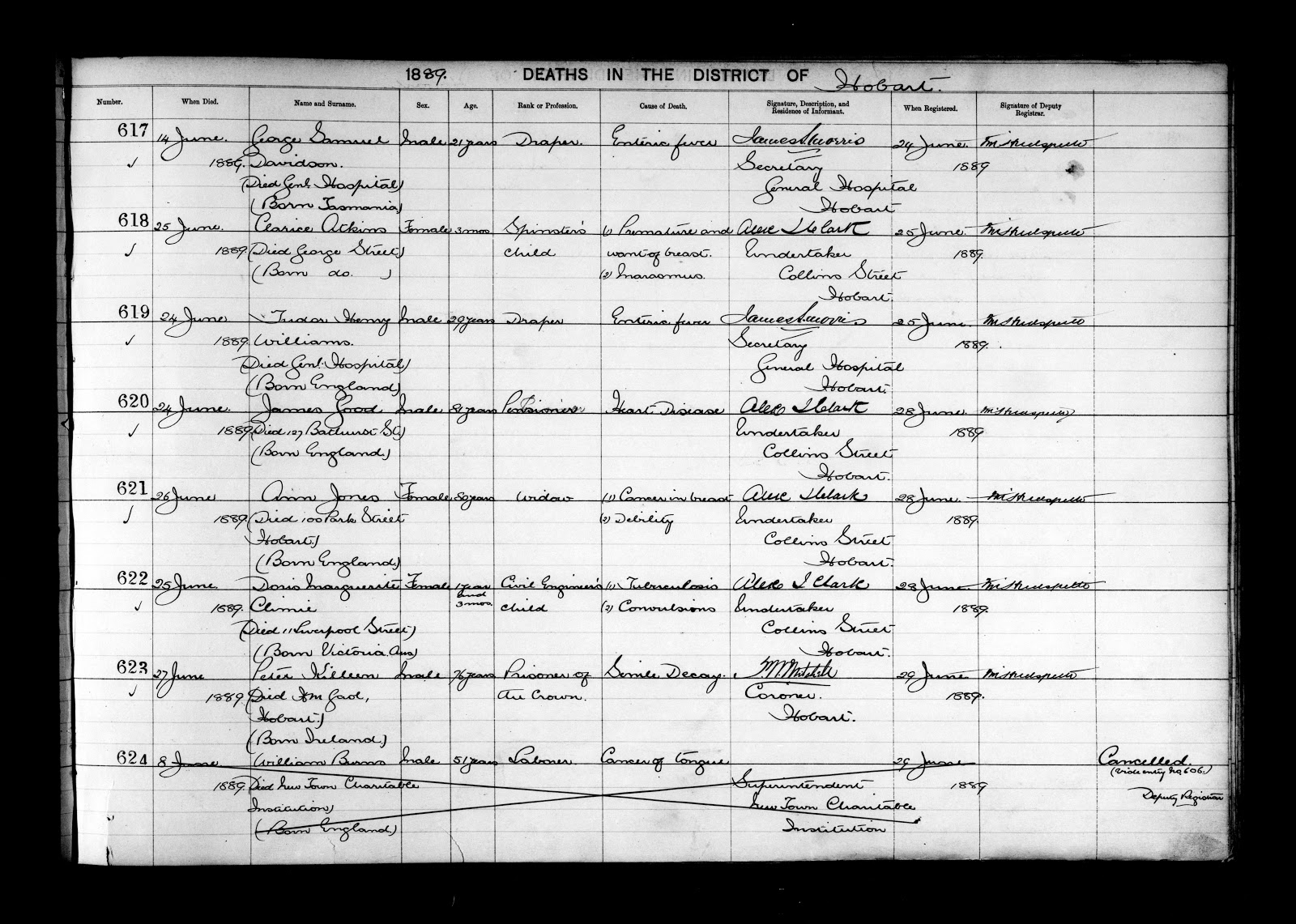