In early 1977, Special Collections Librarian at the State Library of Tasmania, G.T. Stilwell, established from archival records (AOT MB 2/98) that free settlers John and Mary Ann Nevin had arrived in Hobart in 1852 with their four children: Thomas James, Mary Ann, Rebecca Jane, and William John (Jack). He forwarded this information in a letter to the QVMAG where curator John McPhee was preparing an exhibition of Thomas J. Nevin's photographs of convicts taken for police in Hobart in the 1870s. This is an extract of G.T. Stilwell's letter:


Thomas Nevin was born on 28 August 1842 near Belfast, Northern Ireland (Mrs S[helverton]). He was the son of Private John Nevin and Mary his wife whom he accompanied on the convict ship Fairlie which arrived at Hobart Town in July 1852. John who was one of the guards of this vessel was also accompanied by his other children Mary A. and Rebecca both under fourteen and Will[iam] J under a year old (MB2/98). 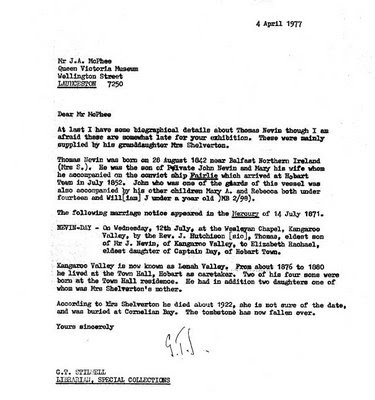 Rebecca Jane Nevin (1847-1865)
Photographs by Thomas Nevin of his siblings Mary Ann and Jack (William John) survive in several family collections, but no information about the second sister Rebecca was found until recently. This death notice appeared in the Mercury, 13 November 1865:

Rebecca Jane Nevin died of causes unknown. If she was 18 years old in November 1865, she would have been born ca. 1847, under 4 yrs old when she departed Portsmouth on the Fairlie in March 1852. Her father John Nevin wrote and published a poem in January 1866 as a tribute to her short life and suffering, titled "Lines on the much lamented death of Rebecca Jane Nevin"; the original is held at the University of Melbourne Library Special Collections.

Lines on the much lamented death of Rebecca Jane Nevin : who died at the Wesleyan chapel, Kangaroo Valley, on the 10th November, 1865, in the 19th year of her age by John Nevin. Kangaroo Valley, 27th January 1866. University of Melbourne Library.

In October 1865, Mary Ann Nevin applied to the Board of Education for aid to conduct a school at Kangaroo Valley, New Town. Her application was supported by family friend, amateur photographer and naturalist Morton Allport who wished to place a memorial there (for whom it isn't stated) and others, but the application was rejected. The memorial might have been in anticipation of Rebecca Jane's death, which was imminent by November 1865. 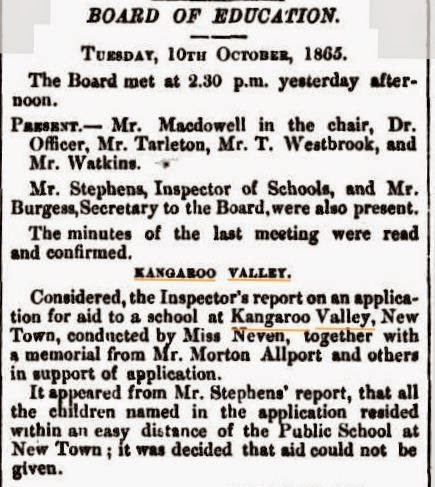 
KANGAROO VALLEY
Considered, the Inspector's report on an application for aid to a school at Kangaroo Valley, New Town, conducted by Miss Neven [sic], together with a memorial from Mr. Morton Allport and others in support of application.
It appeared from Mr. Stephens' report, that all the children named in the application resided within an easy distance of the Public School at New Town; it was decided that aid could not be given.

Stereograph of Mary Ann Nevin by her brother Thomas J. Nevin early 1870s.
Taken at Kangaroo Valley near the school in the company of an adult male and children
TMAG Collection Ref: Q16826-1-2 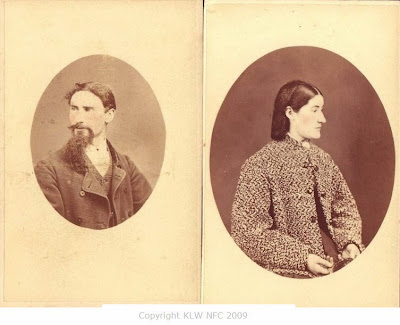 The slight variations in pose, framing and backgrounds in these two cartes-de-visite portraits of Thomas Nevin and his sister Mary Ann Nevin are typical of commercial and studio portraiture techniques Nevin used in the posing and production of the bulk of the 1870s Tasmanian convict "portraits" i.e. mugshots taken for the police.

Mary Ann Nevin was placed on the sick list of the Fairlie, on the voyage out, on 23rd April 1852, together with her mother, and in the company of some of the 290 convicts and Parkhurst prison boys on board. She was listed as "child of guard". See this article here and this article here on this site.

About the same time this photograph was taken, Mary Ann was attacked by a cow at Kangaroo Valley, sufficient to warrant medical attention and publication of the event in the Mercury, 1st February, 1873.


ATTACK BY A COW.- On Thursday afternoon Miss M. A. Nevin, residing at Kangaroo Valley, was attacked by a cow in rather a savage manner. The animal knocked her down, and kept her on the ground for more than ten minutes, rolling her along the bush with its horns. At length her screams brought a young man, named Delaney, to her assistance, and he drove the brute away. Miss Nevin has sustained several bruises, and has been so injured as to necessitate medical attendance.

Father of Thomas James, Mary Ann, Rebecca Jane and William John was a literary man. He published poetry in both special newspaper issues and in pamphlets. He established a night school for males in the school house at Kangaroo Valley next to the Wesleyan Chapel on the property above the Franklin Museum, at Ancanthe, where the family had settled by 1854. 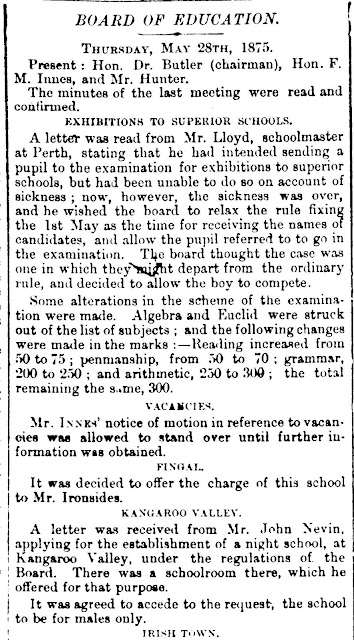 Above: John Nevin, father of Thomas, Rebecca, Mary Ann and Jack, applied to the Board of Education to establish a night school for males at the Wesleyan Chapel, Kangaroo Valley.
The Mercury (Hobart, Tas.) Fri 28 May 1875 Page 2 BOARD OF EDUCATION.


KANGAROO VALLEY
A letter was received from Mr. John Nevin, applying for the establishment of a night school, at Kangaroo Valley, under the regulations of the Board. There was a schoolroom there, which he offered for that purpose.
It was agreed to accede to the request, the school to be for males only.

John and Mary Nevin's children were not only literate, their daughter Mary Ann won a Spelling Bee held at the Oddfellows Hall which was reported in the Mercury on 25 September 1875. Some of words the contestants were required to spell were difficult indeed and some are archaic today. 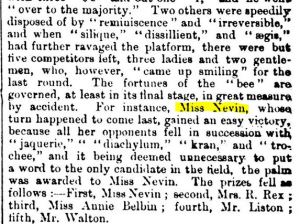 
The fortunes of the "bee" are governed, at least in its final stage, in great measure by accident. For instance, Miss Nevin, whose turn happened to come last, gained an easy victory, because all her opponents fell in succession with "jacquerie", "diachylum", "kran" and "trochee", and it being deemed unnecessary to put a word to the only candidate in the field, the palm was awarded to Miss Nevin. The prizes fell as follows: - First, Miss Nevin; second, Mrs R. Rex; third, Miss Annie Belbin; fourth, Mr. Liston; fifth, Mr. Walton.


CARR-NEVIN.- On the 3rd May, at the Wesleyan Chapel, Kangaroo Valley, by the Rev. N. Bennett, John Carr, son of the late Captain Jas. Carr, to Mary Ann Nevin, only daughter of Mr. John Nevin, Kangaroo Valley.

Thirteen months later, Mary Ann Carr nee Nevin died, aged 34 yrs, at Sandridge in Victoria, 22 days after the birth of her daughter who was given her mother's name in honour, Mary Ann Carr. 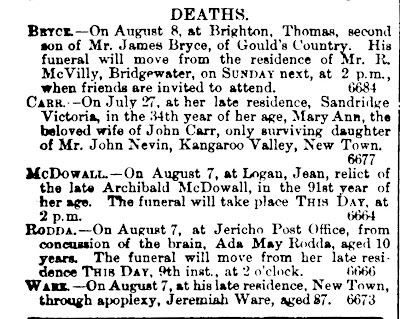 
CARR. - On July 27, at her residence, Sandridge, Victoria, in the 34th year of her age, Mary Ann, the beloved wife of John Carr, the only surviving daughter of Mr. John Nevin, Kangaroo Valley, New Town.

Mother of Thomas James, Rebecca Jane, Mary Ann and Jack (William John), Mary Ann Nevin snr (nee Dickson) had died in 1875, aged 65 yrs, so by 1878, the only woman in the lives of the men in her family - her husband John Nevin snr, and sons Thomas and Jack - was Thomas' wife, Elizabeth Rachel Day, whom Thomas had married at Kangaroo Valley in 1871. There is no recorded marriage of Thomas' younger brother Jack, Constable John Nevin (b. William John) who died of typhoid fever in 1891 while employed at the Hobart Gaol, aged 39 yrs.

Minnie Carr (1878-1898)
Their father John Nevin snr married again in 1879, at the age of 71 yrs, to widow Martha Salter nee Genge, aged 46 years old. The deaths of all these female members of Thomas Nevin's family may have prompted his father to take another wife as a gesture of in locus parentis for his granddaughter Mary Ann or Minnie Carr who survived her mother's death less than a month after her birth. Mary Ann or Minnie Carr, as she was called, was taken as a baby from Victoria and from her father John Carr's care, back to Tasmania into the Nevin family home at Kangaroo Valley in 1878. Called Minnie, she is not to be confused with her cousin Minnie Drew nee Mary Ann Nevin, Thomas and Elizabeth's daughter born in 1884, named Mary Ann after her grandmother, aunt and cousin..

John Nevin snr's grand-daughter Mary Ann or Minnie Carr was cared for by his second wife Martha Nevin (nee Genge, widow of Salter) and moved with her from Kangaroo Valley on John Nevin's death in 1887, but Minnie Carr too succumbed to death in 1898. She died at Martha Nevin's house in Patrick St. Hobart of internal bleeding, shortly before her 21st birthday (1878-1898). 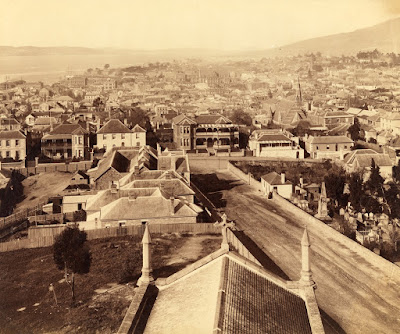