John Nevin: "My Cottage in the Wilderness" 1868

The poem "My Cottage in the Wilderness" by John Nevin, 1868, father of Thomas J. Nevin, viewed here for the first time in four generations by a great great grand daughter, is held at the State Library of NSW, in the David Scott Mitchell Collection. 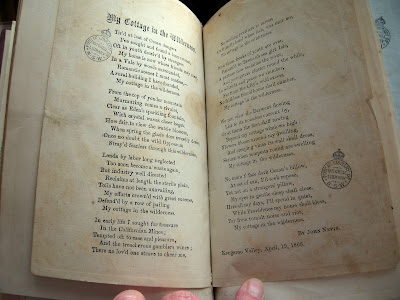 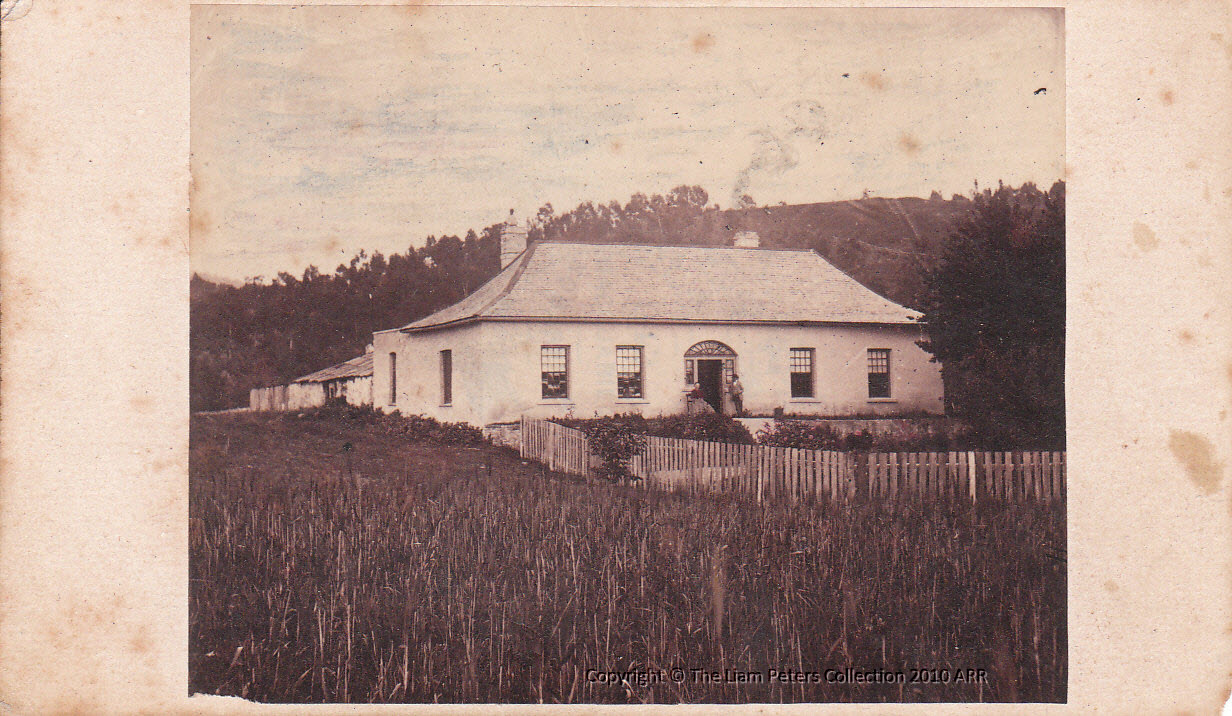 The cottage that John Nevin built. His gardens stretched down to the Franklin Museum, with views to the north-east across the River Derwent.

By any measure, this is an accomplished poem. John Nevin has used the form of the trochaic octameter which would have been known to him from poems such as Edgar Allen Poe's The Raven (American, 1845). But there is no Gothic despair in Nevin's poem: he has escaped the political deceptions of the British Isles. His poem celebrates peace, solitude, contentment with his life's choices, delight in his garden, the security of his wife and children, and the fruits of his industry. He also gives biographical details hitherto not suspected: he says he left Tasmania, which would have been in the first years after his arrival in 1852, to seek his fortune in the Californian gold mines. The life there was not for him: "the rover" returned to "Tasman's sea girt Isle", to his children (Thomas, Jack, Mary Ann and Rebecca) and a "partner" (Mary) who "reclaims" him. His return must have been ca. 1860, when his children were still "youngsters".

"My Cottage in the Wilderness" is written in seven stanzas.
Each stanza is an octet with eight lines.
Each line is an octameter, that is, there are eight syllables to each line, with every second syllable unstressed, i.e. a trochee in which the first syllable is stressed, the second unstressed etc.
In each stanza, the eight lines rhyme as follows: first with third, second with fourth, fifth with seventh, sixth with the last line: ABABCDCD.
The last word of each stanza reprises the theme of the title and key word "wilderness".

My Cottage in the Wilderness

Tir'd at last of Ocean dangers
I've sought and found a lone retreat,
Oft in youth deceiv'd by strangers
My home is now where friends may meet.
In a Vale by woods surrounded,
Romantic scenes I must confess, -
A rural building I have founded,
My cottage in the wilderness.

From the top of yonder mountain
Murmuring comes a rivulet,
Clear as Eden's sparkling fountain,
With crystal waves cheer beget.
How fair to view the wattle blossom,
When spring the glade does sweetly dress;
Once no doubt the wild Oppossum
Stray'd fearless through this wilderness,

Lands by labor long neglected
Too soon become a waste again,
But industry well directed
Reclaims at length the sterile plain.
Toils have not been unavailing,
My efforts crown'd with great success,
Defend'd by a row of pailing
My cottage in the wilderness.

In early life I sought for treasure
In the Californian Mines;
Tempted oft to ease and pleasure,
And the treacherous gamblers wines;
There no lov'd one strove to cheer me,
No smiling prattlers to caress,
Or friendly hand when sick, was near me,
No cottage in the wilderness.

Now those freaks of youth are over,
Return'd to Tasman's sea girt Isle,
A partner now reclaims the rover,
And youngsters cluster round the while,
In solitude and peace we slumber,
Far from the City's wild excess,
No faithless friend home shall cumber,
My cottage in the wilderness.

We can view the Derwent flowing
List to its noiseless current by,
Or at times the fleet skiff rowing
Beyond my cottage windows high;
Flowers bloom around my dwelling,
And creeping vines its wall shall dress,
Secure when tempests round are swelling
My cottage in the wilderness.

No more t'face dark Ocean's billow,
At set of sun, I'll seek repose,
Yet not on a strangers' pillow,
My eyes in gentle sleep shall close.
Here all my days, I'll spend in quiet,
While Providence my home shall bless,
Far from tumult noise and riot,
My cottage in the wilderness. 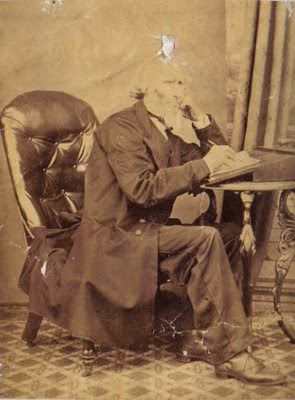 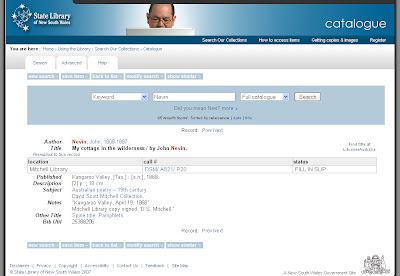 John Nevin may have published several poems and pamphlets between 1868 and his death in 1887. He published a lament in 1881, on the occasion of the death of his friend, Wesleyan preacher, William Genge. In 1879, John Nevin married William Genge's 46 year old widowed daughter, Martha Salter. His "partner" Mary and mother of Thomas, Jack, Mary Ann and Rebecca, had died in 1875. On his second marriage to Martha, this old "rover" and totally engaging character, John Nevin, was 71 years old. 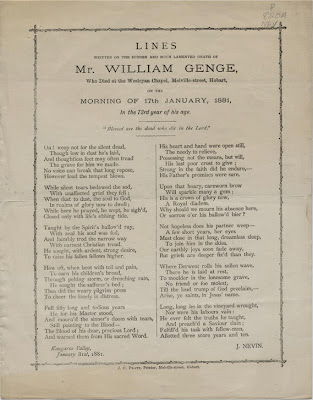 “Lines written on the sudden and much lamented death of Mr William Genge who died at the Wesleyan Chapel, Melville-street, Hobart on the morning of 17th January 1881, in the 73rd year of his age” by John Nevin, Kangaroo Valley, January 31st, 1881.

This watercolour, unattributed and dated 1858, gives some idea of the view to the Derwent from John Nevin's cottage ... 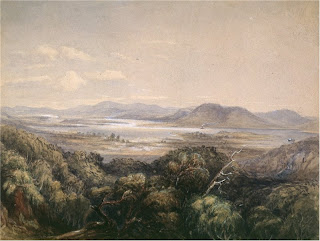 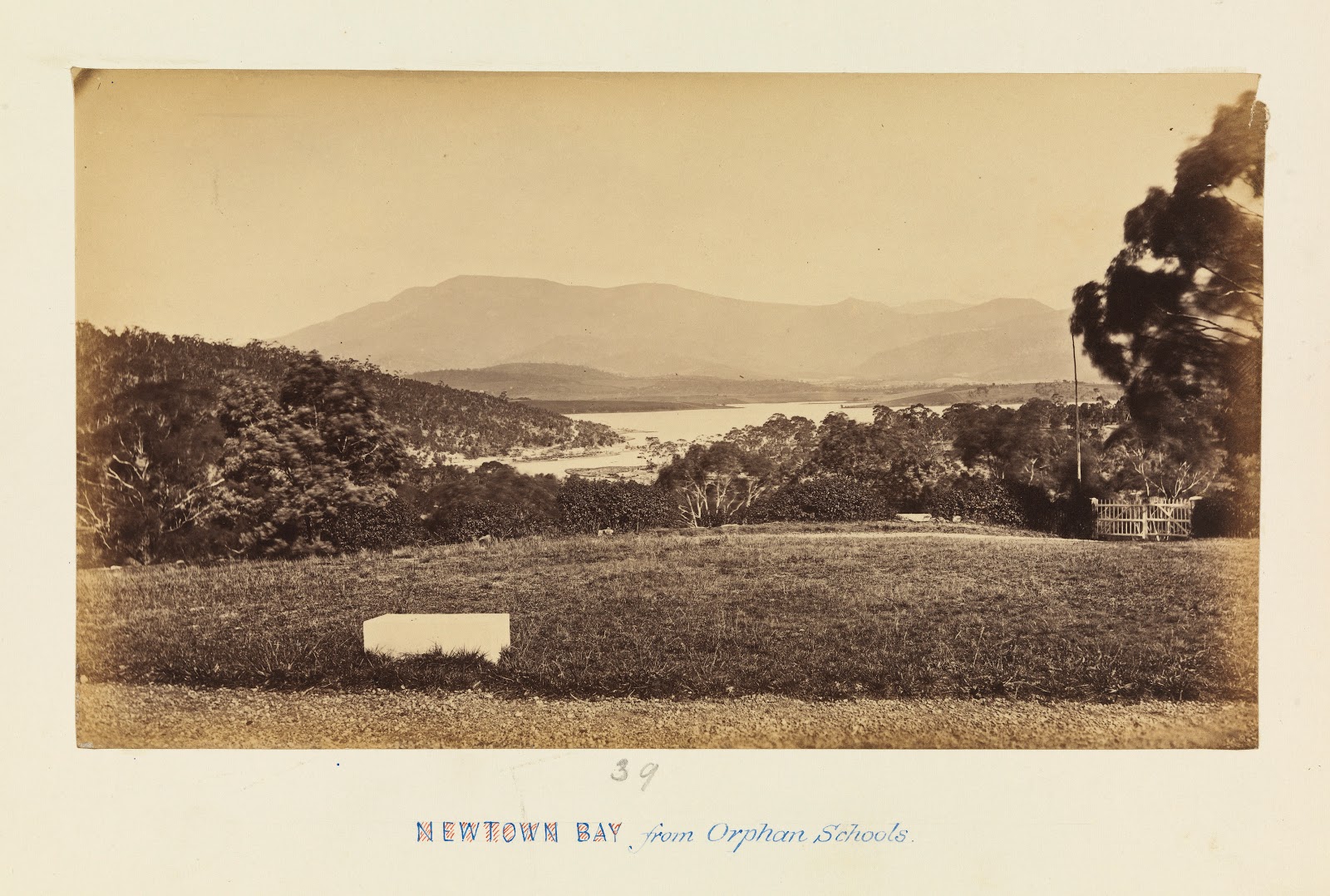