Thomas Nevin and H.H. Baily at the Regatta 1872

This photograph was taken by H. H. Baily on Regatta Day, Hobart, February 1872. The Mercury published a notice to inform the public of its availability. The notice describes the scene in great detail. 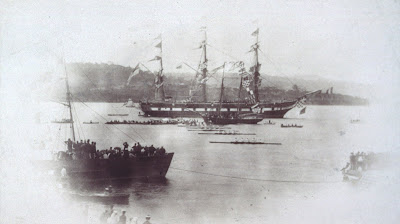 THE MERCURY, 2 February 1872
Beneath the notice about Baily's photograph is a notice informing the public that Thomas Nevin's photographs taken of an organised tour called "The Colonists' Trip" down the Derwent were also available. The newspaper did not publish photographs until the late 1880s, so these photographs which Baily and Nevin forwarded to The Mercury would have been displayed in the newspaper office windows. 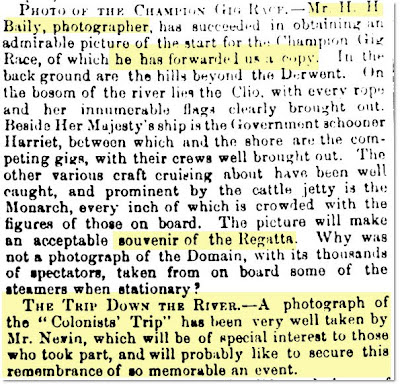 H.H. Baily and Thomas Nevin at the Regatta,
The Mercury 2 February 1872

PHOTO OF THE CHAMPION GIG RACE.- Mr H. H. Baily, photographer, has succeeded in obtaining an admirable picture of the start for the Champion Gig Race, of which he has forwarded us a copy. In the background are the hills beyond the Derwent. On the bosom of the river lies Clio, with every rope and her innumerable flags clearly brought out. Beside Her Majesty's ship is the Government schooner Harriet, between which and the shore are the competing gigs, with their crews well brought out. The other various craft cruising about have been well caught, and prominent by the cattle jetty is the Monarch, every inch of which is crowded with the figures on those aboard. The picture will make an acceptable souvenir of the Regatta. Why has not a photograph of the Domain, with its thousands of spectators, taken from on board some of the steamers when stationary?

THE TRIP DOWN THE RIVER.- A photograph of the "Colonists' Trip" has been very well taken by Mr. Nevin, which will be o special interest to those who took part, and will probably like to secure this remembrance of so memorable event.

The photographs by Nevin may be among a series of stereographs depicting people on board a ship held at the Tasmanian Museum and Art Gallery. Their database listed these items in 2005: