Pictured: Jackie Coogan as the Kid finds something amusing in the Police Gazette ... 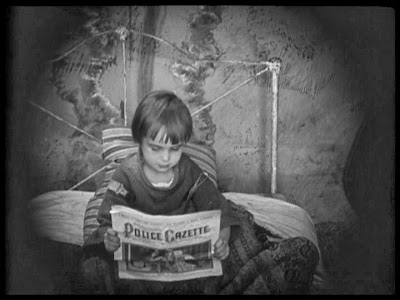 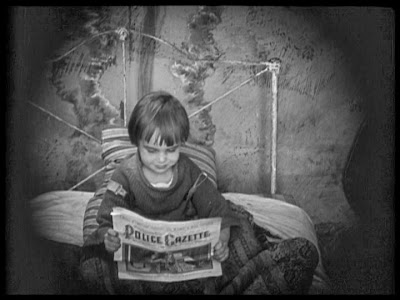 TASMANIAN POLICE GAZETTES
In 1884, the Colonial Government of Tasmania changed the name of its weekly police gazette from Tasmania Reports of Crime For Police Information (and the alternative - Information for Police) which was published by the government printer James Barnard dating back to its first appearance in 1861 (see Archive Office Tasmania POL709): -

- to Tasmania Police Gazette For Police Information Only. 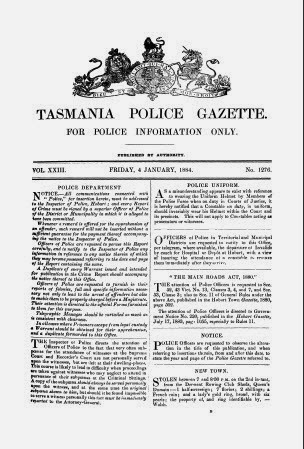 Between those years, the names of photographer Thomas Nevin, his brother Constable John Nevin, and their father John Nevin (snr) appeared several times; Thomas as the photographer of prisoners, his brother John as an arresting constable and witness at inquests, and their father John Nevin as a victim of burglary. No photographer working in Tasmania other than Thomas Nevin is listed as assisting police in arrests in these years (Thomas Nevin was also assistant bailiff to detectives), but several local photographers were accused or convicted of crimes as serious as larceny ((e.g. Joshua Anson and Frank Miller), as unfortunate as bankruptcy (eg. Cherry, Spurling, and Riise), as mysterious as sudden death - probably from photochemicals (e.g. Haldene Cotsworth) and as inconsequential as drunkeness (e.g. Henry Anson). Some listings pertaining to photographers were notices about their disappearance in other jurisdictions but thought to be in Tasmania, and yet other listings related the cunning of impostors pretending to be photographers, usually con artists sought for theft.

The gazettes would have been commonplace in the Nevin family household, a ready source of amusement for the children, and a key source of information of scheduled Supreme Court sittings and Oyer sessions requiring Thomas Nevin's attendance.

In this notice from page 78 of the 21st May 1875 issue, Thomas Nevin is listed assisting police with the arrest of William Graves. See this article, and the possible "Special Photograph"( a term used by the NSW police of casual photographs taken of offenders prior to their official mugshot- see Peter Doyle, Crooks Like Us 2009) which Nevin took of a man answering Grave's description. In the same issue and on the same page are the names of several other prisoners whom Nevin photographed, and whose photographs are still extant (John Jones, Fitzpatrick, and Robinson see cdvs below). 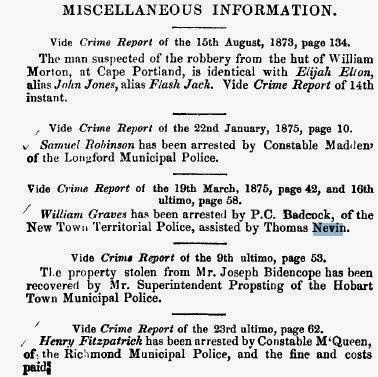 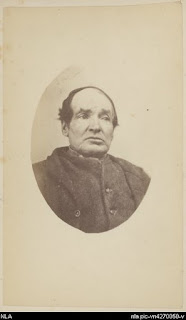 This photograph of JOHN JONES whose alias was ELIJAH ELTON is held at the National Library of Australia with the incorrect catalogue record noting his alias as "Brocklehurst" which was in fact the alias of another JONES, that of JAMES JONES (known also as "Spider") - also at the NLA: see mugshot below.

Vide Crime Report of 11th July 1873, page 118, 25th July, 1873, page 122 and 5th September 1873, page 146.
John Jones, alias Flash Jack, is identical with Elijah Elton, vide Crime Report 1st November, 1872, page 179,and 20th November, 1874, page 189, now undergoing sentence in H.M. Gaol, Hobart Town.Warrants have been lodged against him at the gaol by Mr. Superintendent Griffith, of the Richmond Municipal Police, by whom and Sub-Inspector Harvey,of the Glamorgan Municipal Police, he has been identified.

This photograph was taken by Nevin at the Hobart Gaol on November 20th 1874 when John Jones was incarcerated for burglary. In May 1875 it was forwarded to regional police who - as the notice states - correctly identified him from his photograph and issued the further warrants, even while John Jones was still in the gaol serving sentences for his previous crimes.

The mugshot of the other "JONES" - JAMES JONES (also known as Spider) alias James BROCKLEHURST was also taken at the Hobart Gaol by Nevin on 3 March 1875 when James was discharged.: 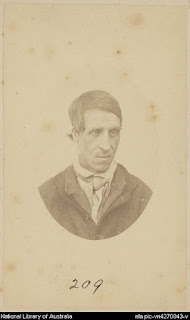 Below: mugshots by Nevin of Fitzpatrick (NLA) and Robinson (QVMAG): 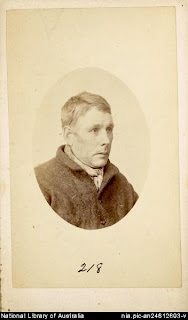 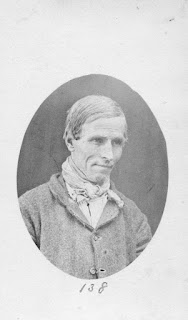