These two images of Tasmanian prisoner Hugh Cohen (or Cowan/Cowen) differ slightly in details of his scarf arrangement and shirt collar. The two photographs as captures were taken at different sittings only a short time apart by Thomas J. Nevin, although printed in different formats. The negative and carte-de-visite in an oval mount (on left) was taken and printed by Nevin at the Hobart Gaol on the prisoner's arrival from the Supreme Court Launceston in early April 1878, when Cohen's sentence of death by hanging was passed and was still current. The second negative was taken and printed in the oblong format in late April 1878 when Cohen's death sentence was commuted to life imprisonment. There was scarcely a fortnight separating the two photographic captures (see the newspaper reports below). The cdv was held at the central registry for prison documents at the Municipal Police Office, Town Hall, where Nevin was a full-time civil servant, and the oblong framed print was pasted to the prisoner's revised criminal sheet after commutation, held at the Hobart Gaol, per notes appearing on the sheet. 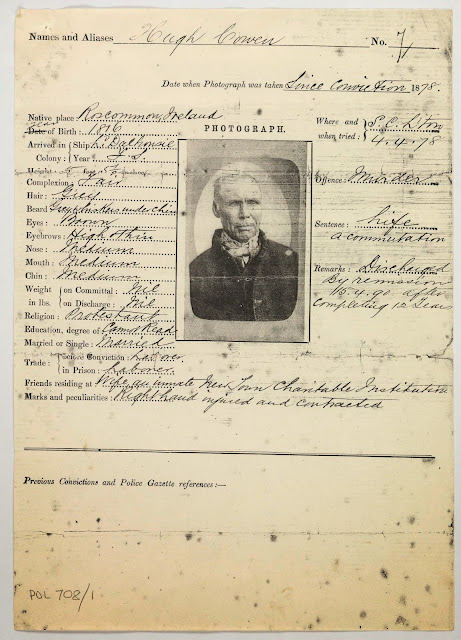 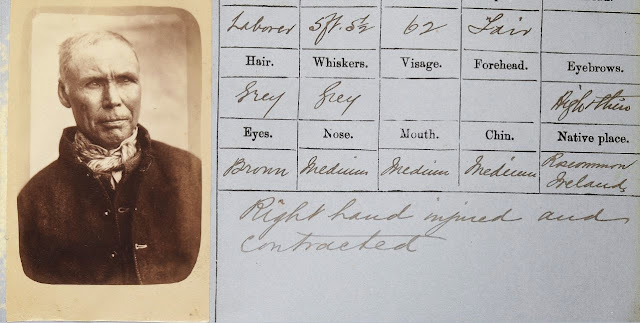 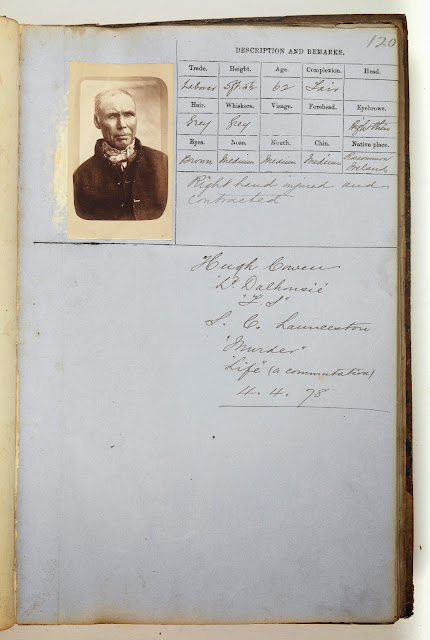 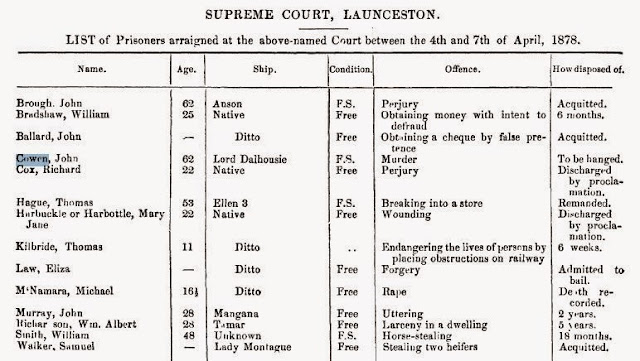 The carte-de-visite of Hugh Cowan/Cohen/Cowen is held in the David Scott Mitchell Collection in a collection of nine mounted carte-de-visite portraits and vignettes of Hobart Gaol prisoners taken by T.J. Nevin between 1875 and 1879.

The verso of Cohen's cdv bears a handwritten inscription copied verbatim either from the criminal record sheet or vice versa. 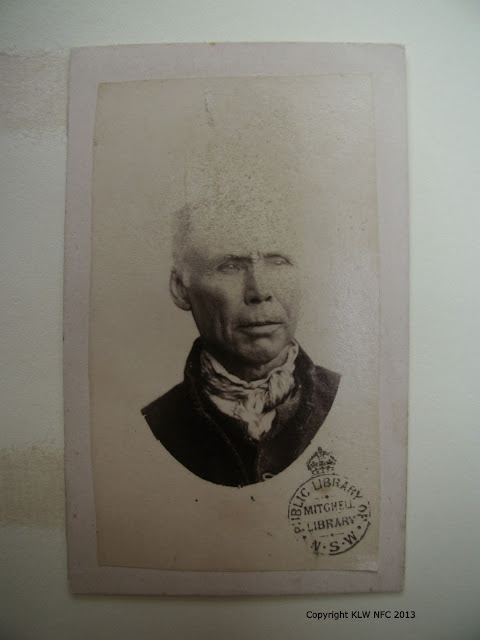 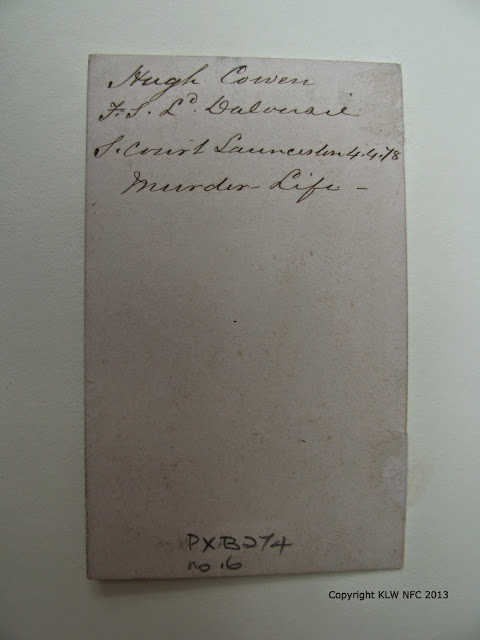 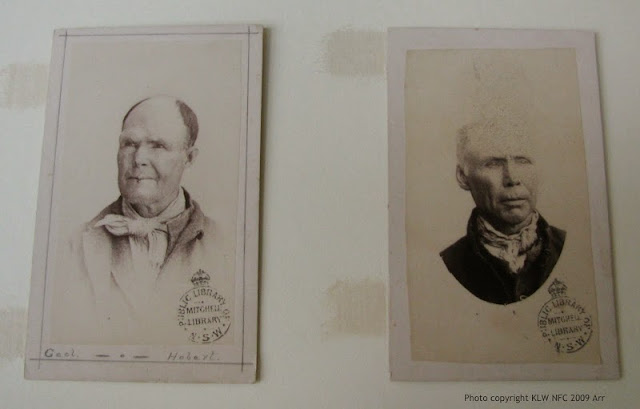 
CAMPBELL TOWN, Tuesday.
On Sunday last, a man named Joseph Barnes was shot dead on the Barton Estate, Macquarie River, by another man named Hugh Cohen. Today an inquest was held on Barnes' remains before Mr Alex Finlay, and a verdict of wilful murder was returned against Cohen who was committed for trial on the coroner's warrant. 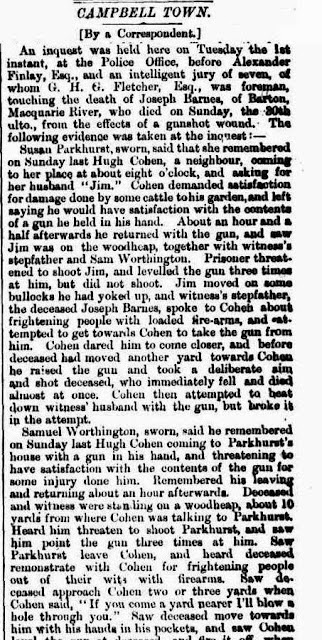 The whole story, as told by The Launceston Examiner, 5th April 1878


Etc etc - the reporter's account was very very long, running over several columns and pages in the Launceston Examiner - with the Judge considering all possible verdicts: murder, homicide, manslaughter, acquittal by reason of insanity - but the jury returned after only twelve minutes' deliberation, with a verdict of "wilful murder". The report ended with this paragraph:

The jury retired at 5.45 p.m. and twelve minutes afterwards returned into Court with a verdict of wilful murder against the prisoner. In answer to the usual question the prisoner said if the Judge was content he was satisfied, but he hoped his Lordship would have mercy upon him. His Honor said there was but one sentence allowed by law, that of death. The prisoner had after a patient trial been found guilty of wilful murder and that sentence imposed upon him the duty of passing sentence of death upon the prisoner. Whether that sentence would be carried out in the extreme limit rested with the Executive Council. He knew no reason why it should not be carried out, and he therefore advised the prisoner not to buoy himself up with any false hopes, but to seek the consolations of a minister of whatever religion he belonged to. The sentence he now pronounced was that the prisoner be taken from the place he stood in to the place whence he came, and from thence to a place of execution, there to be hanged by the neck till he was dead, and may God have mercy on his soul. 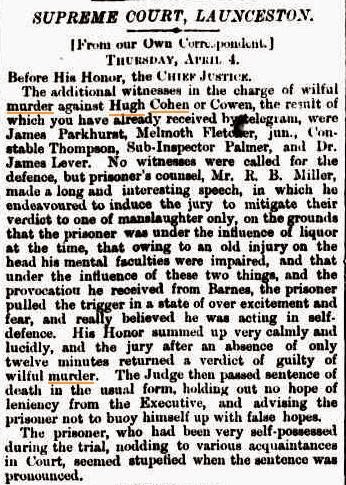 
SUPREME COURT, LAUNCESTON.
[From our Own Correspondent]
THURSDAY, APRIL 4.
Before His Honor, the Chief Justice.

The additional witnesses in the charge of wilful murder against Hugh Cohen or Cowen, the result of which you have already received by telegram, were James Parkhurst, Melmoth Fletcher, jun., Con- stable Thompson, Sub-Inspector Palmer, and Dr. James Lever. No witnesses were called for the defence, but prisoner's counsel, Mr R. B. Miller, made a long and interesting speech, in which he endeavoured to induce the jury to mitigate their verdict to one of manslaughter only, on the grounds that the prisoner was under the influence of liquor at the time, that owing to an old injury on the head his mental faculties were impaired, and that under the influence of these two things, and the provocation he received from Barnes, the prisoner pulled the trigger in a state of over excitement and fear, and really believed he was acting in self-defence. His Honor summed up very calmly and lucidly, and the jury after an absence of only twelve minutes returned a verdict of guilty of wilful murder. The Judge then passed sentence of death in the usual form holding out no hope of leniency from the Executive, and advising the prisoner not to buoy himself up with false hopes.
The prisoner, who had been very self-possessed during the trial, nodding to various acquaintances in Court, seemed stupefied when the sentence was pronounced.


HOBART TOWN, April 15
The sentence of death passed upon Hugh Cowan, or Cohen, for the murder of Joseph Barnes has been commuted by the Executive to imprisonment for life.

Transported for 7 years as Hugh Cowen, 34 yrs old. A hawker by trade, he was convicted in 1848 at Mayo for uttering base coin, arriving in Hobart in August 1852. His wife and family arrived in 1854 and he was granted a Certificate of Freedom in 1856. Convicted and imprisoned for life at the Hobart Gaol in 1878. 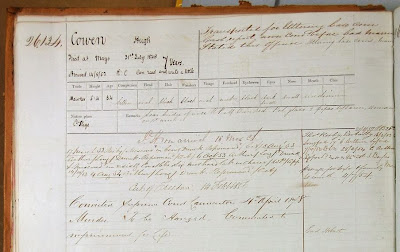 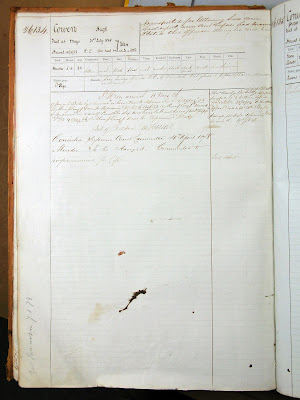 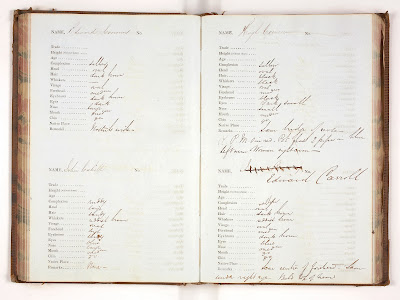 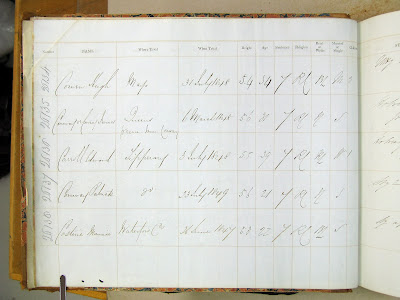 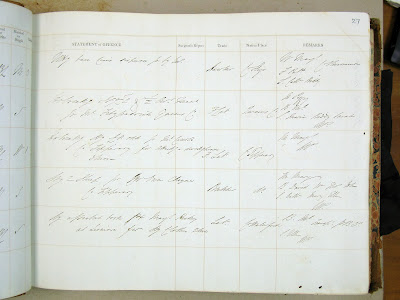