William Radcliffe published a guide to Port Arthur in the 1930s with photographs by John Watt Beattie taken in the early 1900s. The shame of convict heritage, a keenly felt stigma of the times, required concealment of real names. On page 25, he writes:

In consideration of relatives who may be living, the actual names have been omitted. If any doubt of the facts is occasioned in any way, the records may be seen on application at my museum at Port Arthur. 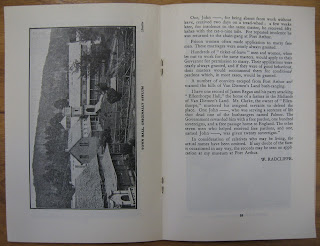 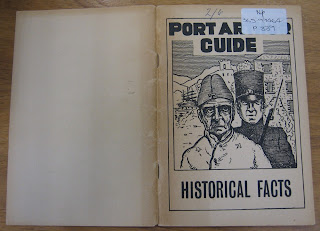 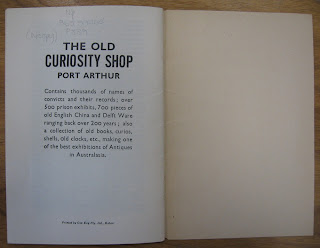 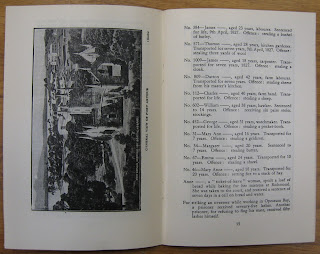 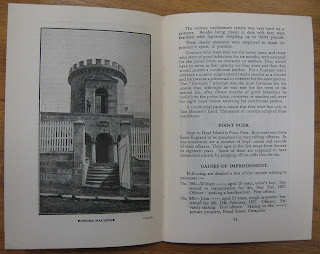 If William Radcliffe was inclined to fictionalise his account of the "historical facts" in the 1930s for reasons of discretion, the present Port Arthur Historic Site "interpreters" have no such qualms. Fictionalisation is the MO of the theme park. Carolyn Strange reported her experience in 2000 in these terms:

Proceeding off from the workers’ display area is a room set aside for a slide show that combines 1860s photographic images of real convicts with voice-over fictional recollections of real-life convict Bewley Tuck. Inspired by the experiences of this man, who served sentences at Port Arthur between the 1830s and 1870s, the script is a salty tale about the penal regime and the changes at the site (particularly the introduction of the separate silent prison) in the post 1840s era. Visitors can learn more about the post-convict period (the 1880s to the present) if they move beyond this bare chamber to a story board area that explains how Port Arthur was transformed from a somewhat shameful curiosity into a carefully preserved historical site vying for world heritage status.

Naively conceived fictions by "interpreters" at the PAHS continue to resound around the ruins of facts. In "vying for world heritage status" there seems to be no limit to fictiveness. Those "1860s photographic images of real convicts" were taken by a REAL PHOTOGRAPHER, the contracted Hobart photographer Thomas J. Nevin. Just as the PAHS "interpreters" have dreamt up fictional recollections as a voice-over to accompany one of Nevin's convicts' photos, that of Bewley Tuck's, they've also attempted to suppress Nevin's identity as the photographer. Resistant to facts, and unwilling to distinguish fact from belief, they would wish the public to join in their fantasy of a Commandant-photographer, none other than the Commandant of the Prison, A.H. Boyd, himself accused twice of corruption. That's keeping it in the family! A "mere" (aesthete Chris Long's derogatory epithet, 1995:36) jobbing photographer from Hobart, as Nevin was in the ordinary course of his duties as prison photographer, must seem too mundane for a site "vying for world heritage status." While William Radcliffe's Old Curiosity Shop might raise a laugh now, it is nothing compared to the fictions the present PAHS management is foisting on the public.

POSTSCRIPT
The above article on The Curiosity Shop, first published by us here online on October 12, 2007, provided yet another inspiration this year to this individual, Julia Clark, "interpreter" at the Port Arthur Historic Site (pictured below) to freely plagiarise OUR research, claim our ideas as her own, and then use and abuse them for her shallow self promotional interests. It is no secret that the Port Arthur Historic Site is experiencing financial difficulties (see the PAHSMA Annual Report 2007-2008), and that commercial imperatives lie at the heart of this revisionism of Tasmanian heritage, but it is unacceptable, duplicitious and dishonest indeed to revise history purely to lure tourists to the site with "interpretations" which have no basis in historical fact. In 2007 Clark attempted to convince the National Library to eliminate their long-standing sole attribution to Thomas Nevin as photographer of their Tasmanian collection called convict portraits in order to talk up the Port Arthur Commandant A.H. Boyd (1871-December 1873) - a non-photographer with no reputation or extant photographic work - as THE photographer instead. The extensive curatorial and published research over 30 years on Thomas Nevin's prison photography was piecemeal ignored or "rewritten" by Julia Clark in her "essay" submitted to the NLA, for whatever personal needs she has for gaining attention and by the financial needs of her employer. There is no doubt that the Tasmanian government is wasting money on funding this individual in such endeavours, and should reconsider her involvement to be both an embarrassment and an impediment to gaining credibility for the Port Arthur Historic Site's world heritage nomination. 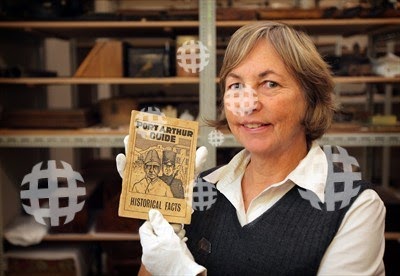