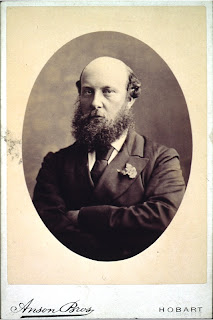 Thomas Nevin, photographer, 140 Elizabeth-street, Hobart, inserted an advertisement in The Mercury which appeared over several weeks during September 1875, soliciting applications from the medical profession for services to members and families of the Loyal United Brothers' Lodge. 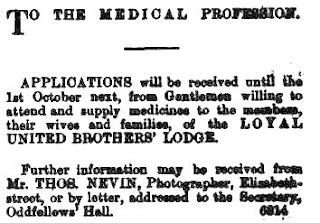 TO THE MEDICAL PROFESSION

APPLICATIONS will be received until the 1st October next, from Gentlemen willing to attend and supply medicines to the members, their wives and families, of the LOYAL UNITED BROTHERS' LODGE

Further information may be received from Mr. THOS.NEVIN, Phototgrapher, Elizabeth-street, or by letter, addressed to the Secretary, Oddfellows' Hall.

Thomas Nevin became a Lodge member in 1869, sponsored by Inspector of Police and Chief Police Magistrate, John Forster, among others including his solicitor Attorney-General W.R. Giblin. In August 1875, Nevin was listed as a Committee member responsible for the organisation of the Lodge's Anniversary Ball. He may well have provided attendees with a souvenir carte-de-visite of their evening's entertainment, especially group photographs taken in situ. One extant photograph of a "Brother" or even Grand Master Lodge member is held in The Lucy Batchelor Collection. 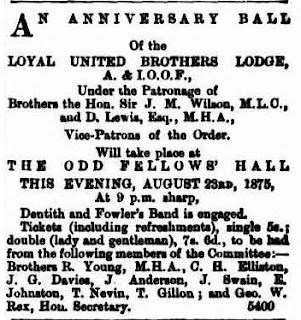 Established in Hobart ca. 1857, the Lodge was a business charity with British Royalist affiliations and offices located in Harrington Street. The organization was supported by a large membership of Tasmania's professional classes, including the influential newspaper proprietor of The Mercury, John Davies. Lodge members were renowned for their fabulous Anniversary dinners held at the Bird-in-Hand Hotel (see, for example, The Mercury Tuesday 12 October 1869, page 3). Nevin was an early and active member during his professional, commercial and civil service photographic career.

The same issue of The Mercury, 30 September, 1875 which ran Nevin's notice to the medical profession also ran a number of advertisements by chemists such as Weavers and Wilkinsons which touted potions for improving health, including the names of doctors who certified their efficacy,  and also this "card" inserted by Dr Edward L. Crowther. He responded to Nevin's advertisement, and would become the medical officer appointed by the Loyal United Brothers' Lodge within the year.

This Special Advertisement in The Mercury of 30th October, 1876, confirmed Dr E.L. Crowther's appointment as Medical Officer of the Loyal United Brothers' Lodge. 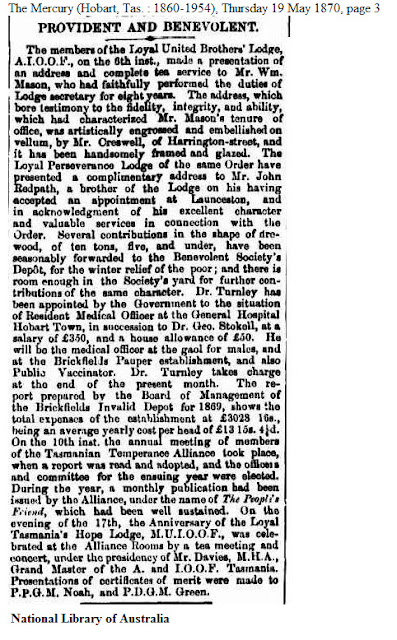 In 1875, Dr George Turnley was invited to report on the sanitary state of the Tasmanian two cities, Hobart and Launceston. He reported that 'Tasmania stood 'almost alone as a British Colony in having no legislative enactments nor any organization for the protection of the Public Health', except quarantine.'
Source of citation: The Companion to Tasmanian History online

In 1878, Dr Turnley conducted a post-mortem on the brain of a youth, Richard Copping, who was executed at the Hobart Gaol on 21st October 1878 for the murder of Susannah Stacey. Copping's medical defence, Dr Benjafield, who sought clemency for the 19 yr old youth and was mindful of public discontent with the continuance of capital punishment, asserted Copping had softening of the brain. Dr Turnley disagreed, declared the youth sane, and the execution went ahead. Turnley's post-mortem found no disease located in Copping's brain (Source: The Mercury, May-October 1878: see the NLA's  Digitised Newspapers website for authentic reports ). 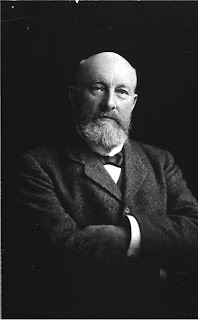