Tom and May Nevin at the Union Chapel flower show 1892 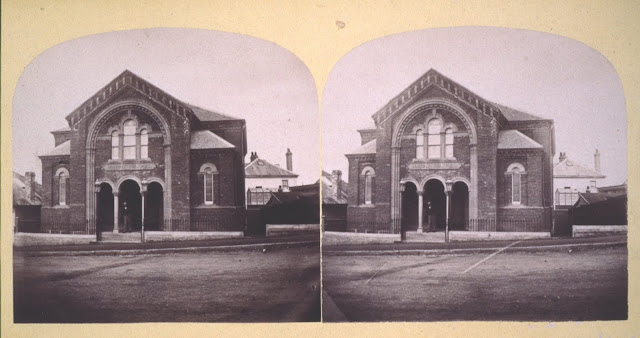 THE UNION CHAPEL
Samuel Clifford and partner Thomas Nevin produced this photograph as a stereograph of the Congregational Union Chapel in Bathurst Street Hobart not long after it was built by the Rev. J. W. Simmons in 1863. It was also known as “The Helping Hand Mission” . In 1892 the Congregational Union held a flower show at the Chapel to raise much needed funds for repairs to the building. Tom and May Nevin - the two eldest of Thomas and Elizabeth Nevin's six children - entered chrysanthemums and flower arrangements as a contribution.

In 1914 the Chapel was still functioning as a Haven for Homeless Men, (The Mercury 21 May 1914), but by the 1920s it was used as a cinema and called the Amazu Theatre. In 1937  the building was purchased by the Hobart Repertory Theatre Society, converted into a "legitimate" theatre at a cost of £1500 pounds and renamed The Playhouse. The venue has been maintained as a public theatre by the Hobart Repertory Theatre Society since its conversion in 1938. 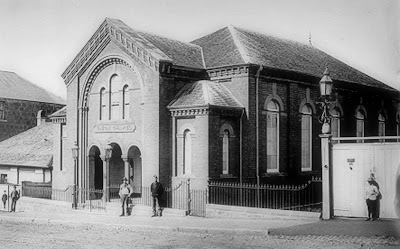 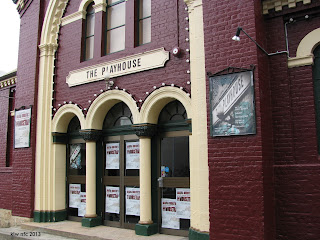 Both Tom and May Nevin were born at their father's photographic studio, 140 Elizabeth Street, Hobart Town. May was born in 1872, Tom in 1874. Tom Nevin had just turned 18 yrs old when he entered six chrysanthemums in the Union Chapel flower show. He was christened with his father's name - "Thomas James Nevin" but was known as "Sonny". May was christened Mary Florence and only ever known to descendants as May. 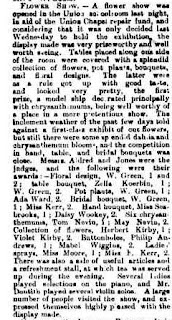 Flower Show. - A flower show was opened in tho Union schoolroom last night, in aid of the Union Chapel repair fund, and considering that it was only decided last Wednesday to have the exhibition, the display made was very prize worthy and well worth seeing. Tables placed along the side of the room were covered with a splendid collection of flowers, pot plants, bouquets, and floral designs. The latter were as a rule got up with good taste, and looked very pretty, the first prize, a model ship decorated principally with chrysanthemums, being well worthy of a place in a more pretentious show. The inclement weather of the past few days told against a first-class exhibit of cut flowers, but still there were some splendid dahlia and chrysanthemum blooms, and the competition in hand, table, and bridal bouquets was close. Messrs. Aldred and Jones were the judges, and the following were their awards:-Floral design, W. Green, 1 and 2 ; table bouquet, Zella Koerbin, 1 ; W. Green, 2. Pot plants, W. Green, 1 ; Ada Ward, 2. Bridal bouquet, W. Green, 1 ; Miss Kerr, 2. Hand bouquet, Miss Sea- brooks, 1 ; Daisy Wookey, 2. Six chrysanthemums, Tom Nevin, 1 ; May Nevin, 2. Collection of flowers, Herbert Kirby, 1 ; Violet Kirby, 2. Buttonholes, Philip Andrews, 1 ; Mabel Wiggins, 2. Ladies' spray 3, Miss Moore, 1 ; Miss F. Kerr, 2. There was also a sale of useful articles and a refreshment stall, at which tea was served up during the evening. Several ladies played selections on the piano, and Mr. Dontith played several violin solos. A large number of people visited the show, and expressed themselves highly pleased with the display made. The Mercury 4 May 1892 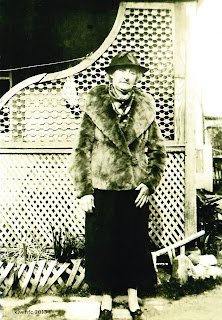 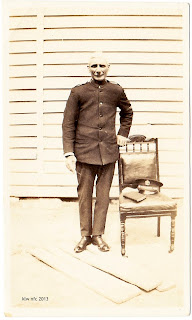 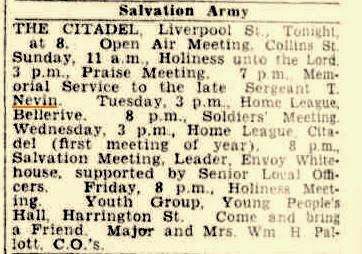 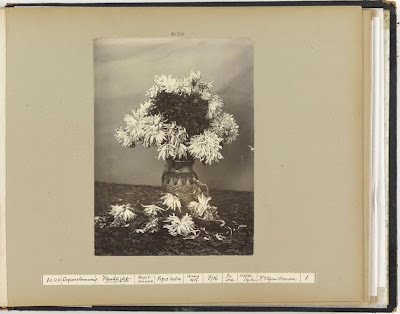