Captain Edward Goldsmith and the Waterloo (1832) 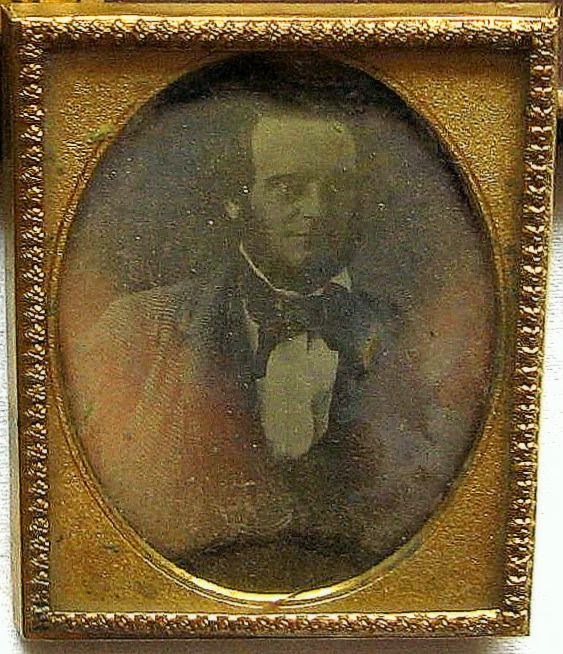 The Waterloo 1832
Following the trials and calamities which beset one of his first commands as a young master on the James which was wrecked days after arrival at the Swan River, Western Australia, in May 1830, Captain Edward Goldsmith, his wife Elizabeth and new-born son Richard Sydney continued their journey to Hobart, VDL, as passengers aboard the Bombay, together with crew-member James Day, Elizabeth Goldsmith's brother. They sailed in the Elizabeth from Hobart to Sydney where Captain Goldsmith took command of the Norval, departing Sydney for London on 26th April 1831. He returned in 1832 to the port of Hobart in command of the Waterloo (not to be confused with the convict transport the Waterloo which was shipwrecked at Cape Town in 1842). First Mate on board the Waterloo (1832) was  his brother-in-law, James Day (1806-1882), younger brother of his wife Elizabeth Day (b. Yorkshire 1803- d. Kent 1875) arriving 5th August at Hobart and 22nd August at Sydney.

The 266 tons brig Waterloo built at Hull carried no guns, and was manned by 13 crew when they left Liverpool on 28th March. They arrived at the port of Hobart on August 5th carrying a general cargo, 28 adults, including pensioners, some bound for NSW, and 8 children. One man died during the voyage. 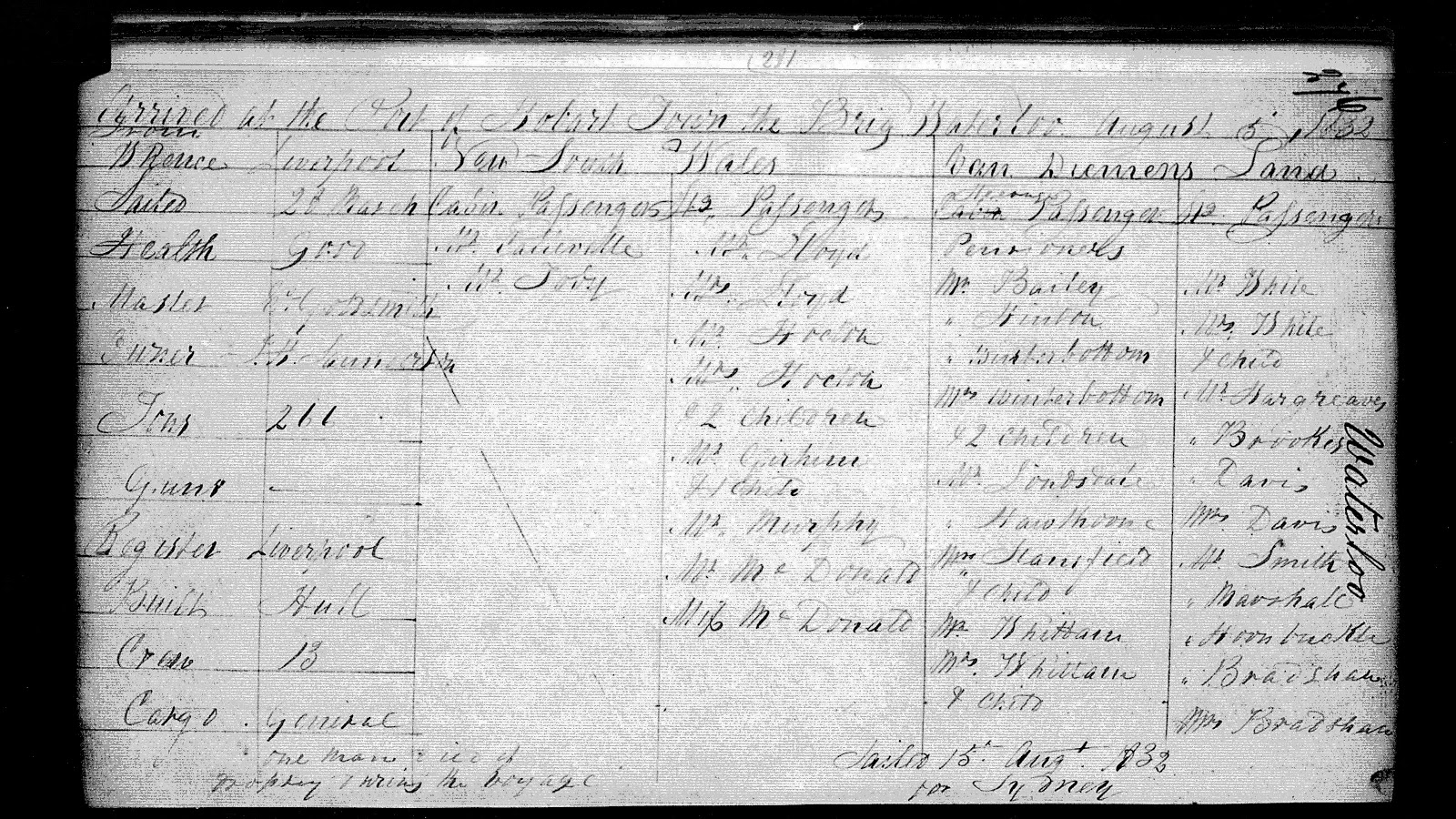 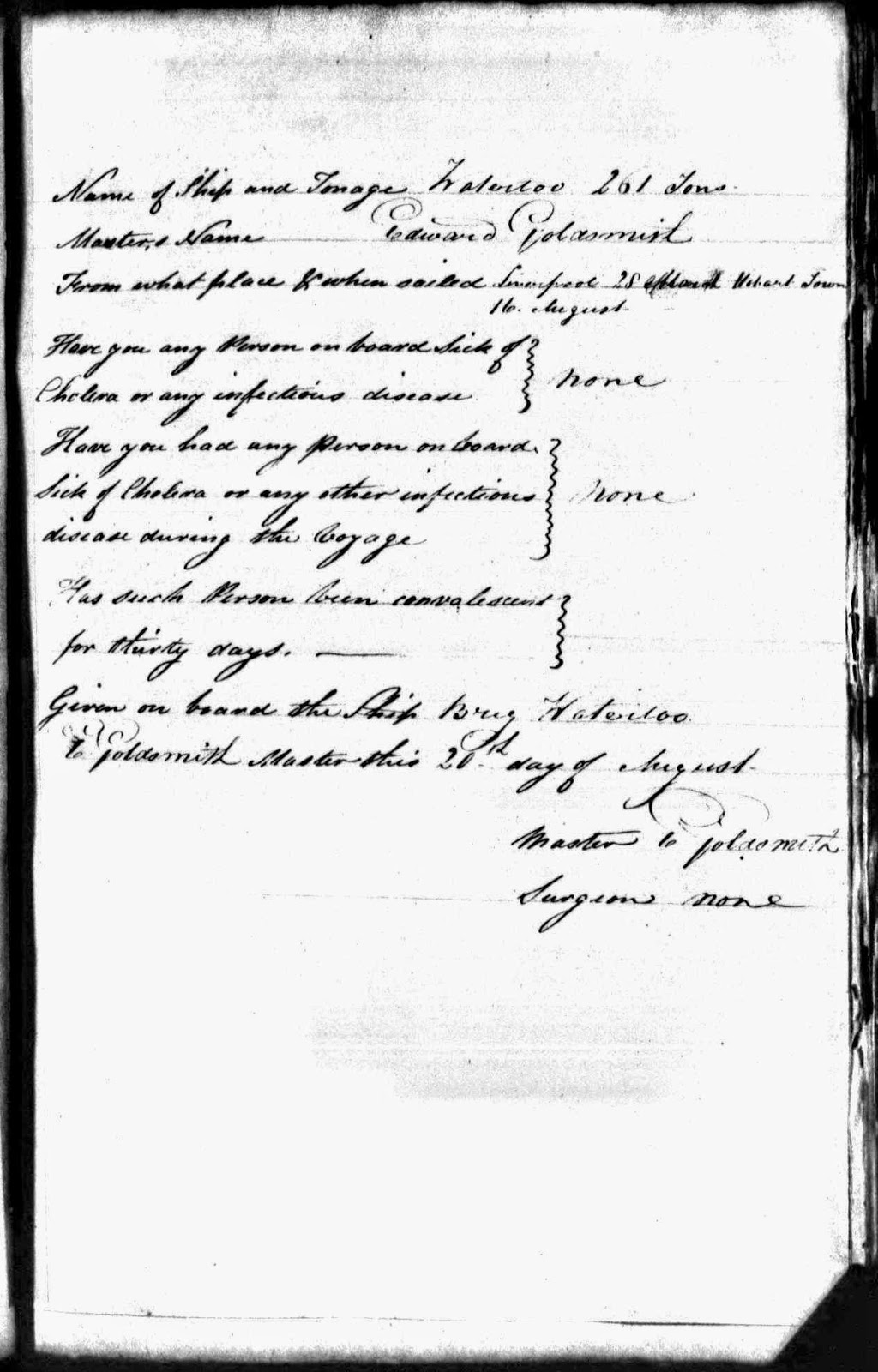 After a short stay of ten days in Hobart, Captain Goldsmith and brother-in-law, First Mate James Day, set sail for Port Jackson (Sydney) on 16th August, 1832, arriving on 20th August. They reported no instances of cholera or other infectious diseases, and no Surgeon aboard. Exactly one year later, Captain Goldsmith arrived again in Hobart as master of the Wave, a ship he commanded on several more voyages between 1833 and the 1840s . He attended the wedding of his wife's brother, master mariner Captain James Day to Rachael Pocock - future parents of photographer Thomas Nevin's wife Elizabeth Rachel Day (b. 1847, Rotherhithe) - at St David's in 1841, and returned every year thereafter to Hobart in command of various brigs and barques, including his finest, the Rattler, which he advertised in superlatives, but he never again commanded the Waterloo. His last command of the Rattler was on the return voyage to London in 1851. His final farewell to Hobart was in February 1856 when he returned home to Gadshill, Higham, Kent as a passenger on board the Indian Queen, accompanied by his wife Elizabeth and son Edward Goldsmith jnr..

1830
After the wreck of the James at Swan River, James Day sailed to Hobart on board the Bombay with Captain Edward Goldsmith, wife Elizabeth Goldsmith nee Day, sister of James Day, and the Goldsmith's new-born son, Richard Sydney Goldsmith as passengers

1832
On this voyage of the brig Waterloo, Captain Edward Goldsmith was in command, his brother-in-law James Day was first mate. 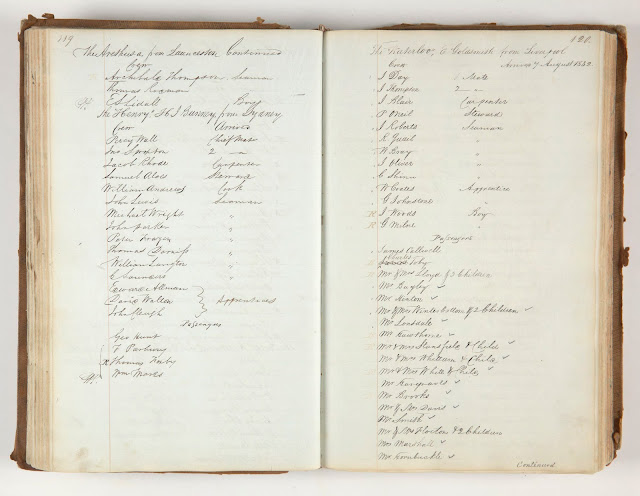 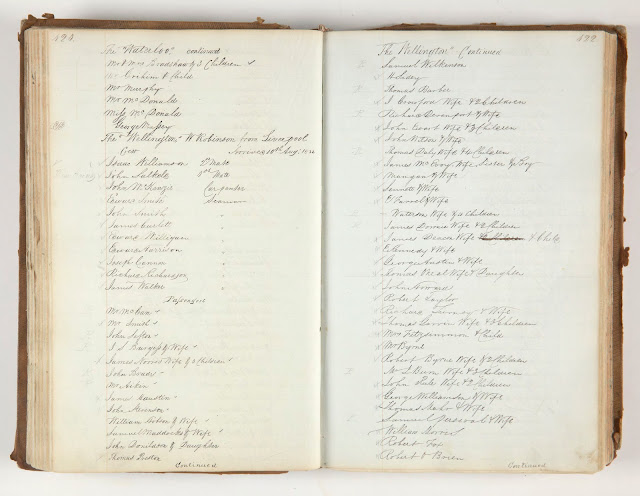 SUMMARY of Captain Edward GOLDSMITH's voyages to and from Hobart 1830-1849: -
This is an incomplete list and does not include voyages which started or terminated at Port Jackson, Sydney.

Captain Goldsmith reported breakers at Bonavista, Cape Verde Islands (Atlantic, west from Senegal, Africa) on the voyage from London to Sydney in command of the Wave, September, 1836. The reef was the site of the wreck of the Madeline 1835.
Source: John Purdy 1838: page 45, The Brasilian navigator; or, Sailing directory for all the coasts of Brasil, to accompany Laurie's new general chart, Volume 1. Oxford University. 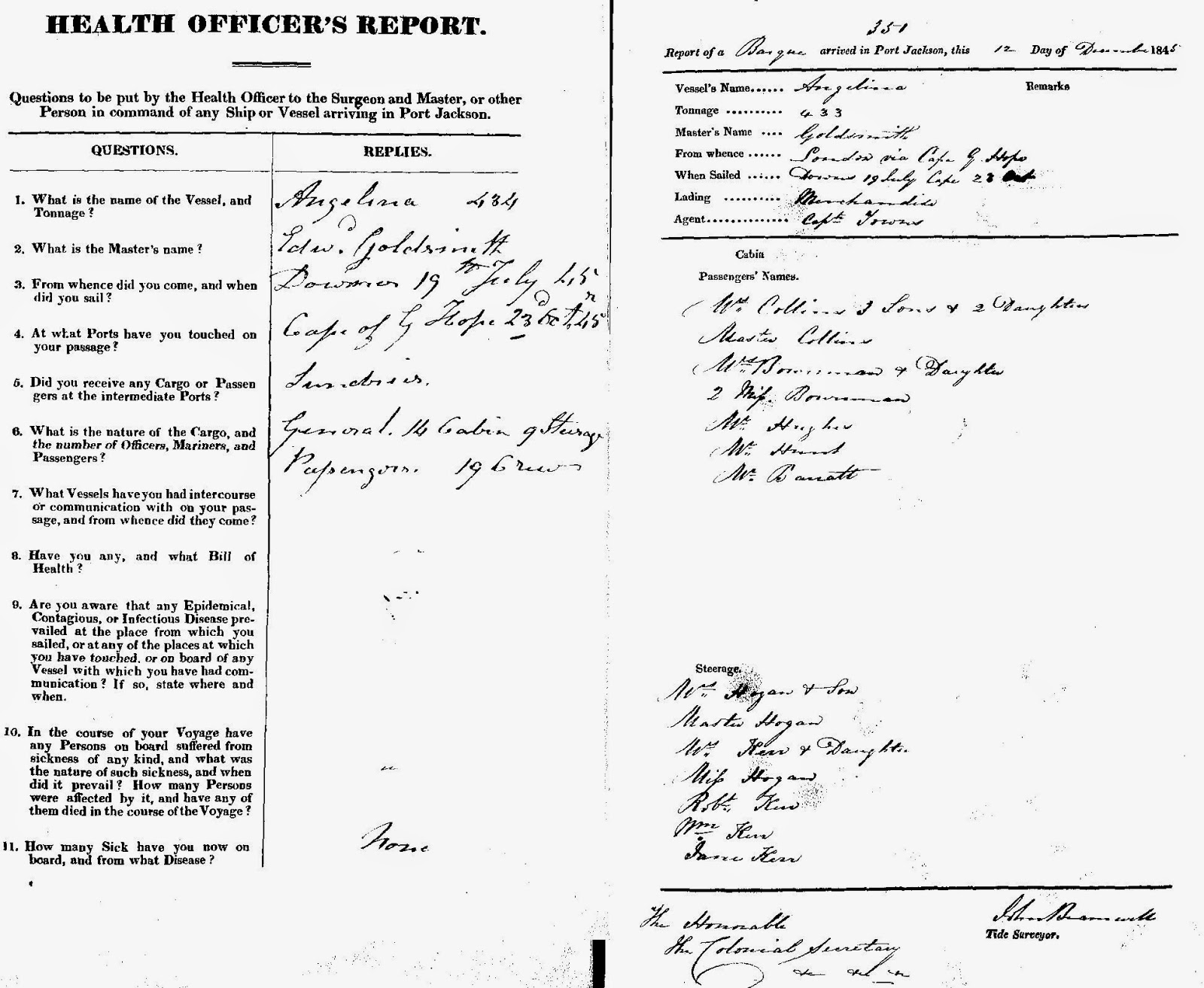 The Waterloo 1842
Although this convict transport bears the same name as the Waterloo which arrived safely at Hobart Town in 1832 under the command of Captain Edward Goldsmith, it appears NOT to be the same vessel. This vessel was shipwrecked off Cape Town in 1842, it weighed 414 tons, not 266 tons, and was built at Bristol, not Hull, in 1815, though it too was built for the timber trade, and in a state of “fragility and rottenness” -

" ... no longer fit to carry logs, she is patched up like other whited sepulchres, stuffed with a living cargo by a contractor, and dispatched to the ends of the earth – a voyage of more than twenty thousand miles ..." (see the editorial below) 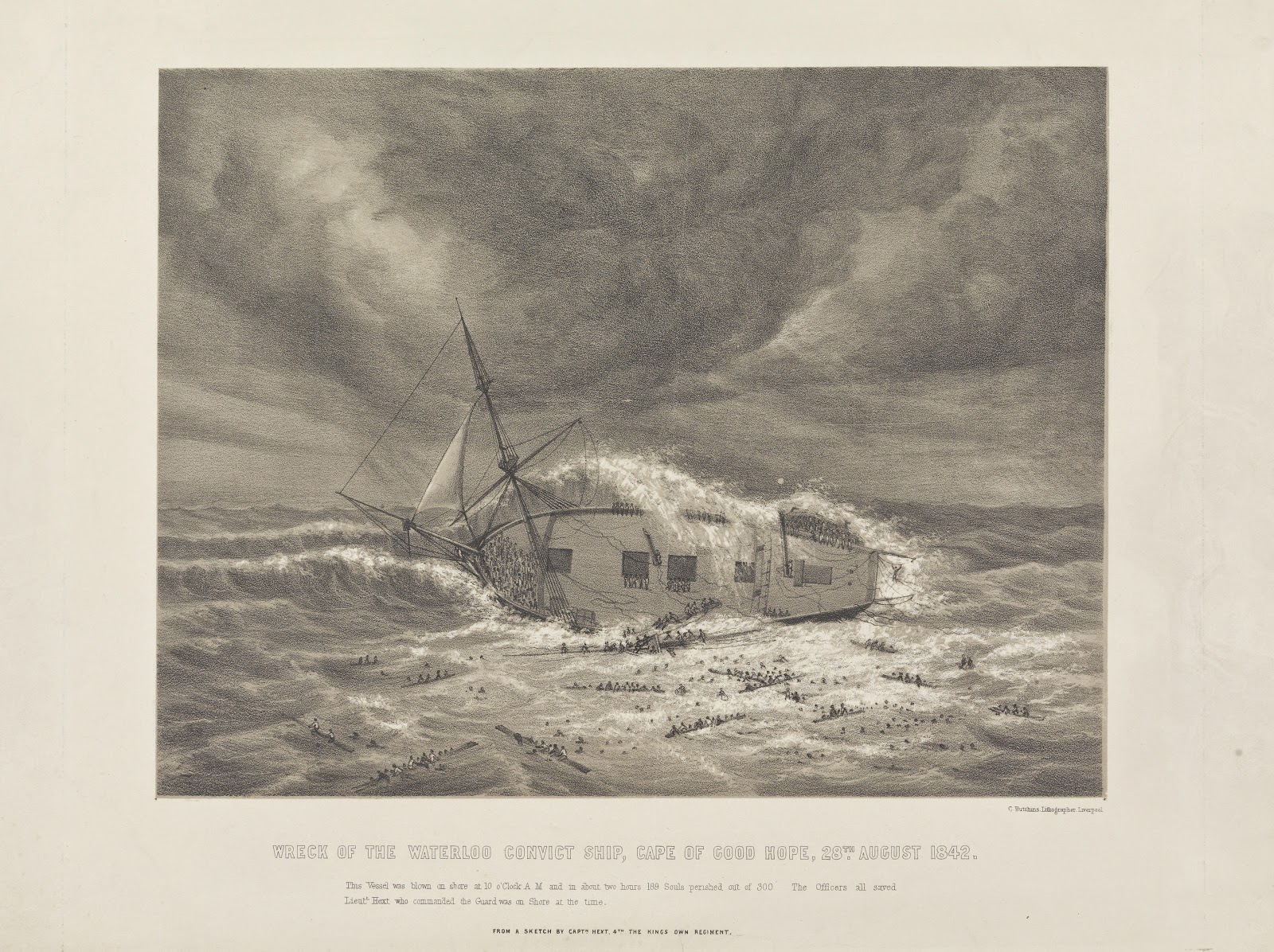 Source: State library Tasmania
Wreck of the Waterloo
Charles Hutchins, lithographer, from a sketch by Captn. Hext, 4th The King's Own regiment

The South African Commercial Advertiser for 31 August 1842 and for 3, 7 and 10 September 1842 carried reports of the wreck of the convict ship Waterloo in a scathing critique of those responsible. . Sue MacKay has posted this transcript online together with names of those who died and those who survived. 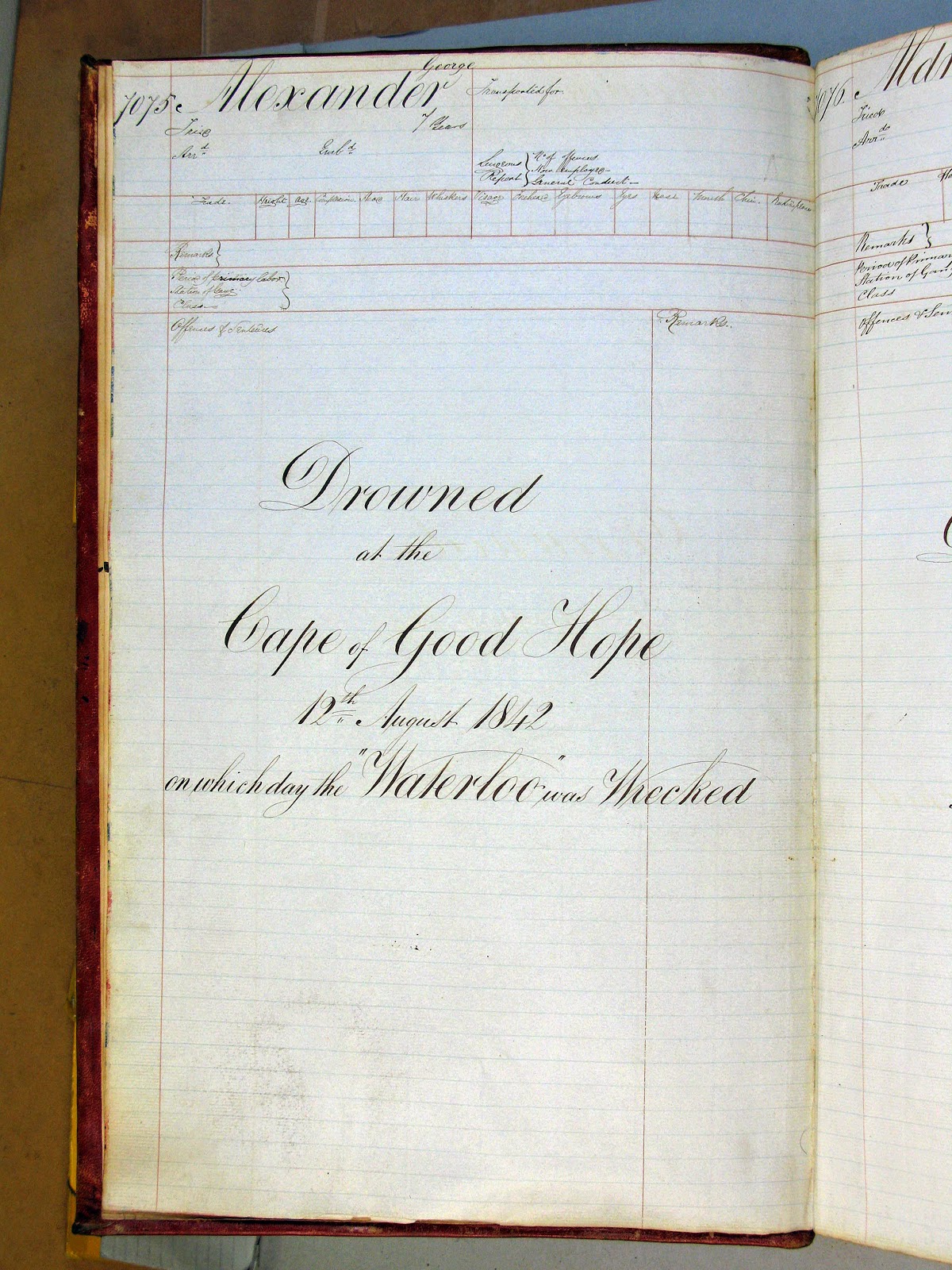 Copy, dated 24 November 1842, of alphabetical list of convicts saved from the wreck of the Waterloo, convict ship; forwarded to the Lieut. Gov. of Van Diemens Land from the Government of the Cape of Good Hope.

Painting of the troop carrier "Abercrombie Robinson" and the convict ship "Waterloo", aground in Table Bay in August 1842. Unattributed, sourced at Wikipedia.