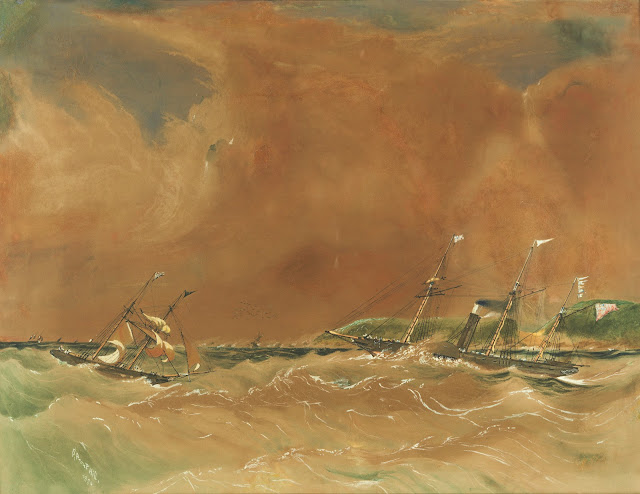 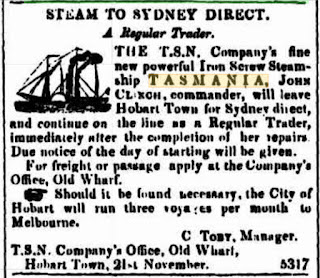 
STEAM TO SYDNEY DIRECT
A Regular Trader
THE T.S.N. Company's fine new powerful Iron Screw Steamship TASMANIA, John Clinch, commander, will leave Hobart Town for Sydney direct, and continue on the line as a Regular Trader, immediately after the completion of her repairs. Due notice of the day of starting will be given. For freight or passage apply at the Company's Office, Old Wharf.
- Should it be found necesary, the City of Hobart will run three voyages per month to Melbourne.
C. Toby, Manager
T.S.N. Companys Office, Old Wharf
Hobart Town 21st November 1854

Captain John Clinch was a contemporary of Captain Edward Goldsmith, both sharing common ground at Rotherhithe, Surrey, where John Clinch was born in 1808, and Edward Goldsmith, born in 1804, trained as a merchant mariner at East India House before taking command of Robert Brook's privately-owned vessels on the Australian wool trade route. Both mariners shared a concern to assist in the development of the colony of Van Diemen's Land (Tasmania) through expansion of intercolonial shipping. Captain Edward Goldsmith regularly attended shareholder meetings of the TSN Co. during 1853-1854 in Hobart which Captain John Clinch joined in 1854, taking command of their iron Tasmania on direct voyages to Sydney. He also commanded the TSN's City of Hobart, and Southern Cross.

Captain Goldsmith departed Tasmania in 1856 to retire at Gad's Hill, Kent, never to return. His niece, Elizabeth Rachel Day, daughter of Captain James Day - his brother-in-law, navigator and first mate on early voyages to the Australian colonies - was baptized at St. Mary's, the Mayflower Church, at Rotherhithe in 1847 and arrived with her father Captain James Day at Hobart as a child, marrying photographer Thomas J. Nevin in 1871 at Kangaroo Valley. Wives and daughters of the mariner community in Hobart which included the Morrisons, the Bayleys, the McGregors, the Hamiltons, etc, became regular clients at her husband's photographic studio.

Captain John Clinch 1808-1875
Thomas J. Nevin photographed Captain John Clinch on board the TSN's City of Hobart on a day trip to Adventure Bay, Bruny Island, south of Hobart, on 31st January, 1872. Captain John Clinch, whom Nevin positioned at the centre of the image, is flanked on his right (viewers' left), by former Premier of Victoria Sir John O'Shanassy (seated), and standing next to him by townsman John Woodcock Graves jnr; and on his left (viewers' right), by Hobart Mayor Hon. Alfred Kennerley and the Hon. James Erskine Calder, former Surveyor-General (seated). Standing behind Captain Clinch and Alfred Kennerley is barrister R. Byron Miller. 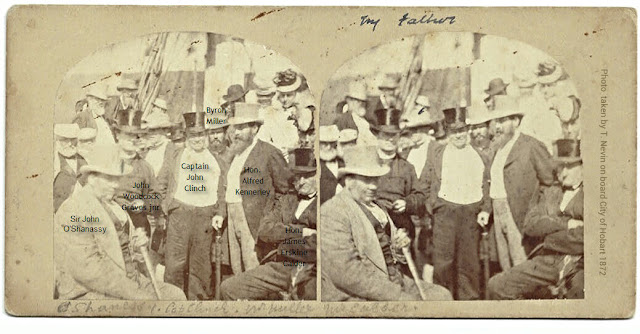 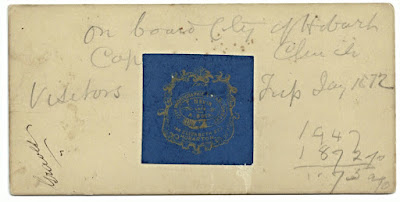 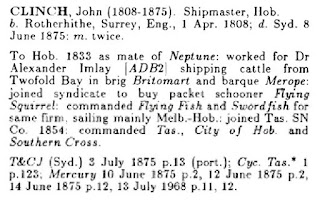 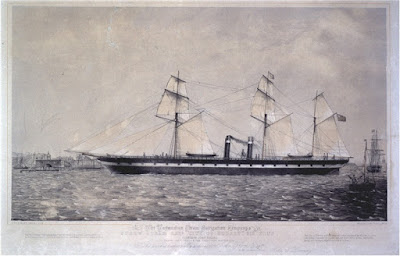 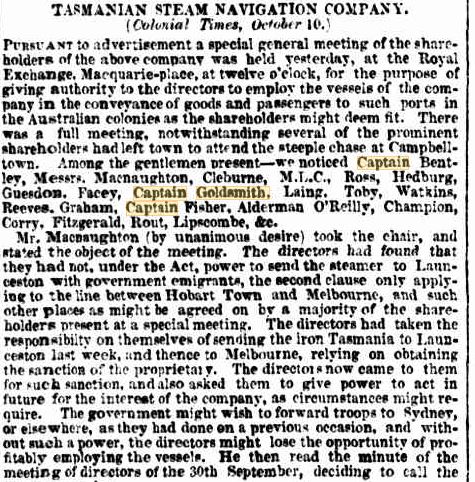 TASMANIAN STEAM NAVIGATION COMPANY.
Colonial Times, October 10.
Pursuant to advertisement a special general meeting of the share holders of the above company was held yesterday, at the Royal Exchange, Macquarie-place, at twelve o'clock, for the purpose of giving authority to the directors to employ the vessels of the company in the conveyance of goods and passengers to such ports in the Australian colonies as the shareholders might deem fit. There was a full meeting, notwithstanding several of the prominent shareholders had left town to attend the steeple chase at Campbell Town. Among the gentlemen present — we noticed Captain Bentley, Messrs. Macnaughton, Cleburne, M.L.C., Ross, Hedburg, Guesdon, Facey, Captain Goldsmith, Laing, Toby, Watkins, Reeves, Graham, Captain Fisher, Alderman O'Reilly, Champion, Corry, Fitzgerald, Rout, Lipscombe, &c. Mr. Macnaughton (by unanimous desire) took the chair, and stated the object of the meeting. The directors had found that they had not, under the Act, power to send the steamer to Launceston -with government emigrants, the second clause only applying to tbe line between Hobart Town and Melbourne, and such other places as might be agreed on by a majority of the share holders present at a special meeting. The directors had taken the responsibly on themselves of sending the iron Tasmania to Launceston last week, and thence to Melbourne, relying on obtaining the sanction of the proprietary. The directors now came to them for such sanction, and also asked them to give power to act in future for the interest of the company, as circumstances might require. The government might wish to forward troops to Sydney, or elsewhere, as they had done on a previous occasion, and without such a power, the directors might lose the opportunity of profitably employing the vessels. He then read the minute of the meeting of directors of the 30th September, deciding to call the present meeting.

Mr. Guesdon inquired if it was contemplated to send one of the vessels into any other trade, which was answered by the Chairman in the negative.
The immediate object of the meeting was Then discussed, and Mr. Corry proposed the following resolution, which, being seconded by Mr. Graham, was passed unanimously : —
'Resolved that, the directors, in the opinion of this meeting, exercised a sound discretion in sending the Tasmania to Launceston,and that the meeting do authorise the directors, at their discretion, to send the vessels of the company to all or any of tbe following ports, (that is to say), Launceston, Geelong, Sydney, Adelaide, Port Albert, New Zealand, Twofold Bay, and Swan River.'

Mr. J. G, Reeves called attention to what he considered a defect in the deed of co-partnership, there being no power to sell any one of the vessels except on winding up. A discussion ensued, and several clauses were referred to but nothing decisive could be found.

Mr. Guesdon renewed the subject of altering the line, and intimated his opinion that this company should attempt the Sydney line. He therefore proposed that the directors be requested to take the matter into consideration.
The Chairman referred to the opinion be at first entertained ... etc etc 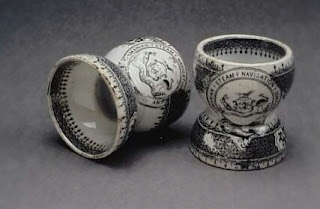 Captain Goldsmith, Captain Bentley and Captain Clinch were all three residents in Davey Street, Hobart, listed in the Hobart Gazette of 1855, p. 471. Two photographers also resided in Davey St. - William Paul Dowling, an Irish chartist, who moved his portrait studio from Macquarie St Hobart, located opposite the Hutchins School, to Number 24 Davey Street, "nearly  opposite the Hampden-road" on the Harrington street side of photographer Douglas Kilburn's house at Number 22 Davey St. A little further down in the direction of Murray St and opposite St David's Cemetery was Stewart's Brewery, separated by a small house from Captain Edward Goldsmith's house at Number 19 Davey St. 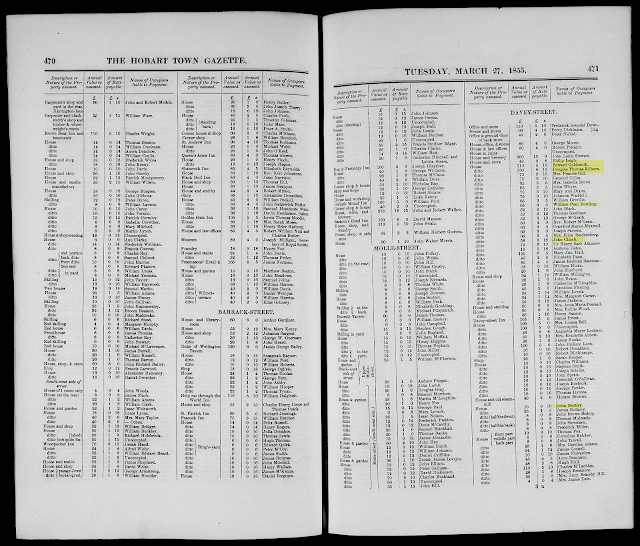 THE PHOTOGRAPHERS of  DAVEY STREET.


THE COURIER
THURSDAY AFTERNOON, NOVEMBER 9.
TASMANIAN CONTRIBUTIONS TO THE PARIS EXPOSITION.
D. T. Kilburn, Esq., of Davey-street, exhibits five calotype views of different localities in Hobart Town. (1.) A view of Macquarie-street, from above Mr. Crisp's residence, looking down towards the Domain, and including within range St. Joseph's (R. C.) Church, the Cathedral of St. David's. &c. (2.) The New Market Place, Hobart Town. (3.) St. David's Cathedral. (4.) View of Macquarie-street, including the Bank of Australasia, Macquarie Hotel, &o. &c. (5.) View of the houses in Davey-street, opposite St. David's Cemetery.

Douglas Kilburn's views of the houses in Davey St. opposite the Cemetery were either retained and sold at the Paris Exposition of 1855, or misattributed to another photographer, if copies are extant, since they seem not to have surfaced in Australian public collections.


REMOVAL
MR. W. P. DOWLING
Portrait Painter,
Begs to inform his Friends and Pupils that he has removed his Studio to No. 24, Davey-street, nearly opposite the Hampden-road. 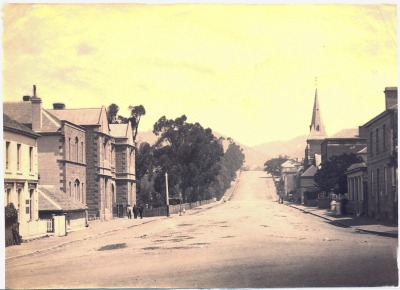