John Nevin, father of Tasmanian photographer Thomas J. Nevin, was born in 1808 at Grey Abbey, County Down, a small town east of Belfast on the coast of Ireland. At that period the region was the centre of Irish cotton manufacturing and a growing centre of linen exports to rival Dublin. When John Nevin enlisted as a Private in the First or Royal Regiment of Foot in October 1825 (The Royal Scots) at the tender age of seventeen, his trade was "weaver". His service record shows he was under age at attestation. First service began at the age of 18 years.

John Nevin's full service lasted 14 years and 237 days in the West Indies and Canada. His record shows his service in the West Indies dated from 30th November 1827 to 30th January 1836, and in Canada from 16th June 1836. He was discharged at London, West Canada on 31 May 1841 on medical grounds (rheumatism,  liver complaints, disease of the urinary organs), and returned to England eventually as a Chelsea pensioner.

Before leaving England once more to travel as a guard on board the convict hulk the Fairlie in 1852, bound for Tasmania, Australia, John Nevin had become a husband and father of four children, and had spent a lonely and unprofitable time on the Californian gold fields, described in his poem "My Cottage in the Wilderness"(1868). 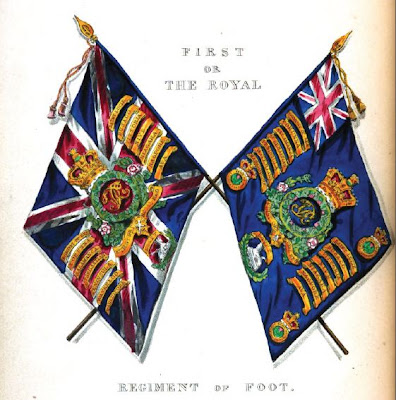 Available at Google books is this full contemporary account of The First or Royal Regiment of Foot, by Richard J. Cannon, published in 1838, which details in the last pages the activities of the regiment in the West Indies 1826-1836, where John Nevin served from the age of seventeen at enlistment (1825) to the battles in the Canadian rebellions of 1837-38, in which John Nevin participated, some details of which appeared in his Obituary published in the Tasmanian newspaper The Mercury (11th October, 1887), viz ...

In his day he was a wielder of the pen as well as of the sword, and was some 50 years ago a contributor to the infant Press in London, Canada West, when the present city of that name was a struggling town of rough and rude buildings and log huts. As a soldier of the Royal Scots he served under his colonel, Sir G.A. Wetherall, and the present Sir Daniel Lyons [i.e. Lysons] was his ensign; and he did his duty in very stirring times in the Canadian Rebellion of 1837-1838. He was engaged in the storming and capture of St.Charles and St. Eustache and in engagements of St. Dennis, St. Benoit, and many other operations on the Richelieu River and adjacent country of Chambly, and at Terra-Bone [i.e. Terrebonne] he assisted in the capture of a large number of French prisoners during a severe winter campaign, often struggling with his comrades to the waist in snow in following his officers in the work of quelling the rebellion of Papineau. John Nevin's proudest boast was that he had been a soldier of the Royals. 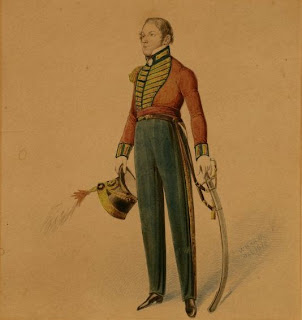 Above: Colonel A. Wetherall as Cpt Wetherall in 1818. Brown University Archive.
He signed John Nevin's discharge confirmation from the Regimental Board as Lieutenant Colonel Commanding.

John Nevin's service in the West Indies coincided with the rise of the abolition of slavery campaign led by William Wilberforce in England, coming into law as the Slavery Abolition Act on 1st August 1834, when slavery was abolished throughout British possessions abroad and slaves were emancipated in the colonies. 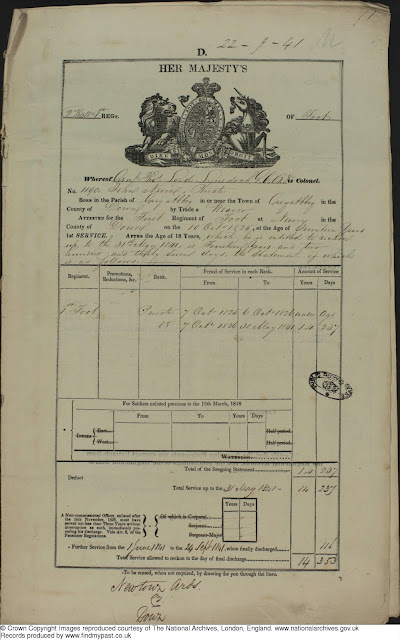 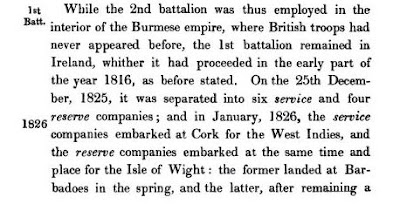 Page 248: John Nevin began service on 7 October 1825, and embarked at Newry in Ireland in October 1826, disembarking at Barbados and proceeding to St. Lucia 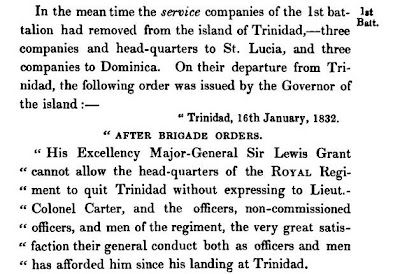 Page 255: By 1832, John Nevin had served on Barbados, Trinidad, and St. Lucia. His service in Canada - see this article - was rewarded with a Good Conduct Badge, conferred on 28th February 1837.

Read these last pages of Richard J. Cannon's contemporary account of the Royals 1st in the West Indies and Canada at this alternate link: The First or Royal Regiment of Foot by Richard J. Cannon, 1838 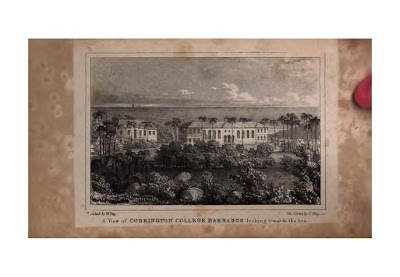 At the Chelsea Hospital for Veterans 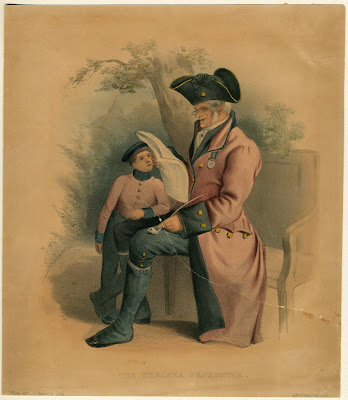 Extract from John Nevin's record (below) refers to the Canadian climate.

Disability or Cause of Discharge
According to the Surgeon's report annexed it appears that Pte John Nevin labors under chronic Rheumatism and liver complaints, and disease of the urinary organs:- that his complaints have been contracted in and by Service in the West Indies and Canada - not by vice, intemperance or design and that he is wholly unfit for further service in this climate and the Regimental Board concur in the opinion of the Surgeon. Conduct in Hospital very good. 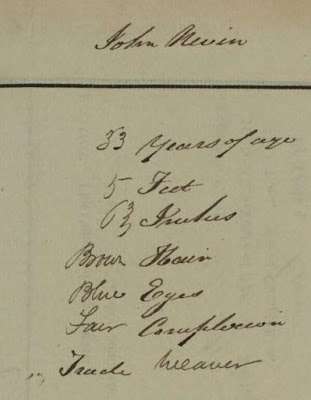 At the time of discharge, John Nevin was 32 years and 7 months of age, 5 feet 7 and half inches tall, with brown hair, blue eyes and fair complexion. The records show some variation. 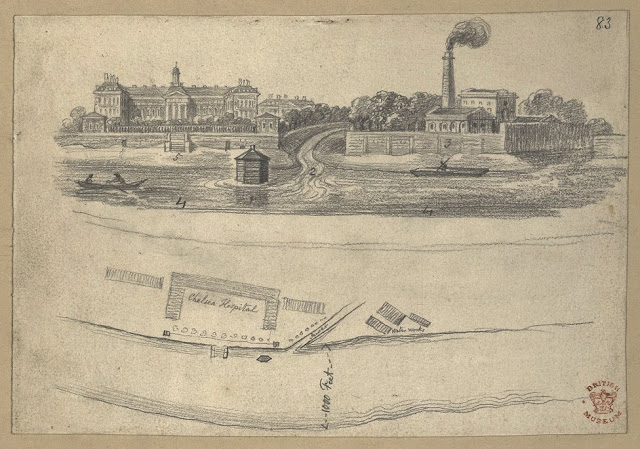 The Thames at Chelsea Hospital ca. 1830
Courtesy of The British Library
Artist: Scharf, George senior
Medium: Pencil on paper
Date: 1830
This drawing depicts Chelsea Hospital seen from the Thames, and includes a plan of the area.
The Royal Hospital Chelsea was founded by King Charles II in 1682 as a refuge for soldiers of the army who had become unfit for duty, either after 20 years service or as a result of injury. On entering the Hospital an old soldier surrendered his army pension in return for board, lodging, clothing and medical care. The residents wore distinctive scarlet coats and black tricorn hats and would have been immediately recognisable.The hospital buildings have not escaped attack from enemy forces, being bombed in 1918 and 1945. 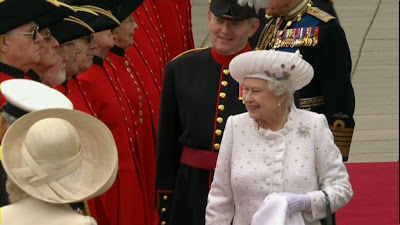 Above: TV snapshot from live BBC-ABC broadcast 3 June 2012 of the Queen inspecting Chelsea Pensioners at the Pageant on the Thames (KLW Imprint 2012).

Service Record for John Nevin
for the years 1825-1841 (12 images)
served in First, or Royal Regiment of Foot.
Source: Find My Past for UK Archives

A very odd mistake was made by the OMD on page 7 of these forms: he wrote the name "Thomas Nevin" instead of  the correct name, John Nevin, written on all other pages of his service record, viz:


Opinion of the Principal Medical Officer, at Chatham 28 August 1841
After examination at the General Hosptl I am of the opinion that Thomas Nevin [sic] is unfit for service and wholly to be permanently unqualified for military duty and I approve the opinion of Mr (?) Surgeon
(?) Doctor Smith .... OMD

There may have been a reason for it, yet to be clarified. It's certainly a coincidence that his son Thomas was born almost exactly twelve months later, on 28th August 1842. 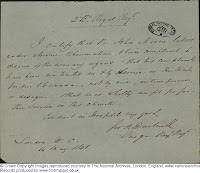 Above: aerial shot of Grey Abbey ruins, County Down, Ireland 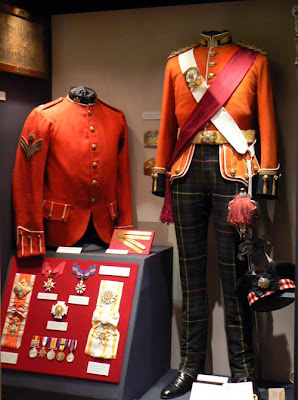 Above: Uniform of the First, or Royal Regiment of Foot
Courtesy of the The Royal Scots Regiment Museum